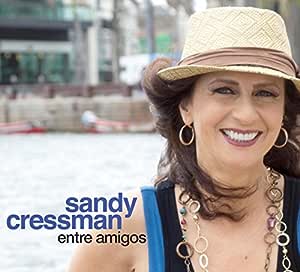 While many an American jazz singer flirts with the Brazilian Songbook, San Francisco vocalist Sandy Cressman made a name for herself as a true devotee of Brazil s greatest contemporary composers, interpreting songs by post-bossa masters like Milton Nascimento, Hermeto Pascoal, Gilberto Gil, and Filó Machado in Rio-accented Portuguese. The friendships forged with Brazilian and Brazilophile musicians during her musical travels course through her captivating new album Entre Amigos, a project that marks a major new chapter for Cressman as a tunesmith. Entre Amigos features a gorgeous array of new songs created with an impressive cast of collaborators, including the celebrated Pernambuco frevo composer/bandleader Spok, pianist/composer Jovino Santos Neto, and pianist Antonio Adolfo, rising Brazilian-American guitarist Ian Faquini, a Brazilian jazz master who got his start at the center of Rio s early 1960s bossa nova scene. The CD features such notable musicians as drummers Dennis Chambers and Celso Alberti, guitarist Ray Obiedo, and horn players Harvey Wainapel, Jeff Cressman, Natalie Cressman and Eduardo Neves.

A Brazilian experience that is sure to touch the heart and soul of all jazz fans. Sandy Cressman delivers vocals that are filled with story telling passion laced with a personal touch. Sandy performs this wondrous ballad filled CD in the poetic language of Portuguese. One need not understand the words to appreciate these emotion inspired songs. Sandy's voice is crisp, sultry and expressive, with a tone similar to the great Latin vocalist, Gloria Estefan. Sandy's star stunning vocals are also supported by an all-star cast of jazz musicians. Each song composed with a lively Brazilian flare that will wake up the tired soul of jazz fans all over the world looking for something special to add to their collection. Sandy Cressman has become one of my favorite female vocalist and I'm sure she will impress you as well. Enjoy this one for years to come! --Jazz Review

Cressman pours out her love, sometimes to excess, for the delightfully sensuous and melodious Brazilian lyrics in all her renditions. --San Francisco Examiner, Phillip Elwood

...Here, then, is a nest of true chirps (bop term for female singer), ladies who aver, it would seem, that without a song the day wouldn't even begin, let alone never end. --Downbeat, Zan Stewart

4.2 out of 5 stars
4.2 out of 5
5 customer ratings
How does Amazon calculate star ratings?
Amazon calculates a product’s star ratings based on a machine learned model instead of a raw data average. The model takes into account factors including the age of a rating, whether the ratings are from verified purchasers, and factors that establish reviewer trustworthiness.
Top Reviews

Dr. Debra Jan Bibel
TOP 1000 REVIEWER
5.0 out of 5 stars Brazil: Thick and Sparse, Feverish and Gentle
Reviewed in the United States on February 3, 2017
The San Francisco Bay Area Brazilian music scene has long appreciated vocalist Sandy Cressman, appearing with her group Homenagem Brasileira and lately also with Ray Obeida's Mistura Fina. "Entre Amigos" echoes reedman chum Harvey Wainapel's similarly collaborative two volumes, "Amigos Brasileiros." [The Cressman family are all engaged in the arts; besides Sandy is trombonist husband Jeff, who tours with Carlos Santana and is featured in this album; daughter Natalie, on one track, who also took to the trombone and sings, exploring the alternate rock edge of jazz; and daughter Julianna, a dancer.] Sandy wrote many of the album's lyrics, in Portuguese and English, and some of the music; the other pieces are credited to Ian Faquini, Hugo Wainzinger, Obiedo, Jovino Santos Neto, and noted band leader/composer Antonio Adolfo. The mellow music of jazz sambas and bossa nova flow harmoniously and richly by rounded sound quality and arrangements. Cressman's previous album, "Brasil, Sempre no Coração," was 12 years ago, covering Brazil's great songwriters. It was more exciting, uptempo, and brighter, but the new album, in addition to exhibiting her writing talents, is far more varied and deeper in feeling. Moreover, the host of participating musicians make each track unique. The arrangements may be thick or sparse, feverish or gentle, with instrumentation supporting the lyrics.

This fine new album offers a nice assortment of Brazilian jazz styles performed by a bevy of esteemed musicians. Sandy Cressman, and colleague Harvey Wainapel, somehow fell in love with Brazilian music and have fostered close relationships with regionally re-settled and Brazil-based artists to make the Bay Area a thriving center of this much loved sound. This sweet, rhythmic album is a splendid showcase of their art.

gk
2.0 out of 5 stars Disappointing
Reviewed in the United States on June 9, 2018
Disappointing.
I liked Sandy Cressman's records with Homenagem Brasileira where she sang covers of mostly really great songs.
This recording has no good songs.

The musicians and recording quality are all good but the music is just mediocre at best.
Far away the high point of this recording is Peter Horvath's playing on "Here In Your Arms I Dream" (hard to ignore the poor song writing) but better to save your money and buy Peter's recordings
Read more
One person found this helpful
Helpful
Comment Report abuse

Michael Wesolowski
5.0 out of 5 stars Música Popular Brasileira Jazz (MBPJ) Ten Stars
Reviewed in the United States on February 3, 2017
From one to five stars “Entre Amigos" is a TEN! Bom Demais!, (Too Good to pass up) The latest release and expressions of the great and lovely Brazilian singer, composer, poet, lyricist, collaborator and producer, Sandy Cressman brings together about three dozen of family and friends, all stellar Brazillian groove masters and Brazilian luminaries that make this collaboration of songs so special!
Sandy and friends will take your saudade away and have you dancing and singing along with the their musical Brazilian ear candy like pulling your heart to a warm Brazillian beach with friends and loved ones for a festa or take you to Recife for Carnaval with Frevo Master Spok and reminisce with Elise Regina's legendary pianist Antonio Adolfo about Rio.
Entre Amigos is beautifully fresh and inspired Musica Popular Brasiliera Jazz (MPBJ) from the opening samba/batucada to beautiful bossas, baião and maractu complete with contempory poems and solos.
There are marvelous horn arrangements from Natalie Cressman, solos from Jeff Cressman and stellar horn players, acoustic guitar prodigy Ian Faquini plays a beautiful acoustic guitar duo with Sandy, Brazilian groove master bassist David Belove, Scott Thompson and Sidiel Vieira swing the bottom, great pianist as Jovino Santos Neto (Flora Purim) and Anne Sadjera, with Ray Obiedo (guitar+) and many many more of Sandy's friends from her Brazilian heart make this music so special that you'll be on the replay button over and over again. Valeu Sandy e Amigos!
Read more
One person found this helpful
Helpful
Comment Report abuse