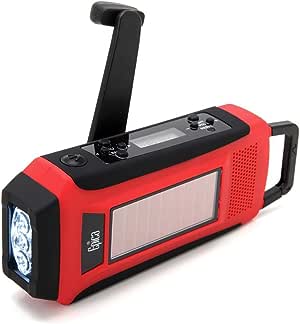 Visit the EPICA Store
3.7 out of 5 stars 1,459 ratings
| 126 answered questions
Currently unavailable.
We don't know when or if this item will be back in stock.

3.7 out of 5 stars
3.7 out of 5
1,459 global ratings
How are ratings calculated?
To calculate the overall star rating and percentage breakdown by star, we don’t use a simple average. Instead, our system considers things like how recent a review is and if the reviewer bought the item on Amazon. It also analyzes reviews to verify trustworthiness.

Michael Cast
5.0 out of 5 stars A HUMBLE APOLOGY for a commendable seller and manufacturer.
Reviewed in the United States on May 25, 2016
Verified Purchase
I must apologize to Epica and Perella's for lashing out with a harsh review of this product without giving the seller or the the manufacturer a heads up before I wrote a scathing review. I really blasted these poor guys. I ordered this device because it DOES NOT NEED BATTERIES. Crank the dynamo, or leave it in the DIRECT sunshine, and you have a flashlight or radio that will work for hours, and (most importantly) you can pick up the emergency and weather broadcast frequency. It's not a good idea to go camping in a dead zone where cell phone reception is unreliable or, more likely, the battery runs down on the phone. Either way, a timely forecast could prevent a disaster. The dynamo CAN crank out enough juice to PARTIALLY charge a device like a cellphone; JUST enough power to make an emergency call if you can find a signal. It will not FULLY charge a phone or tablet. It is a radio, not a pocket sized nuclear reactor. For me, it was exactly what I was looking for. It arrived just in time for the three day weekend. I was ready to go.
BUT HERE IS WHERE I OWE AN APOLOGY: The afternoon before we left for the lake, I was getting things together, so t took the S-charger radio out of the box to pack it. That is when I noticed that the factory static plastic that protects the solar screen and controls looked tattered. I peeled away the plastic to find that the solar lens was SCRATCHED! And then I see there are two cords but NO adapters. I checked the label again; yes, there were supposed to be adapters in the box. There were pieces missing! Honestly, I probably would have let the scratches go, but the charging cord was designed to work with the adapters. In other words, you HAD to have those adapters. Without them I would not be charging anything, part way, or any other way. So I believed that I had received either a rebuild, or a returen that just got put back into circulation. Some companies sell 'Open Box Products'. I was very disappointed! I have been tricked before. So, I marched right to my keypad and expressed my disappointment in a review... I am a reviewer. It is my duty. Here's what Epica did:

My review could not have been posted for more than a few hours when I started getting frantic e-mails. Epica and Perella's were falling all over each other trying to find out why I had just sucker punched them! What was wrong!? And, what can they do to rectify my problem!?.....Well, that was my first clue that I may have jumped to conclusions. The seller obviously was as upset as I was! They had no idea how that package got sent to me in that condition. After a flurry of emails they said they would be sending a new one immediately! No arguments. No excuses. The seller didn't even care HOW, or WHY it was sent out that way, they were only concerned with getting me a NEW one. I believe they were sincere, because if they weren't they would not have contacted me at all. So, I took that first review down. I felt kind of bad for not contacting them first before reacting. So, I will give them good feedback, and here is the review that should have been posted in the first place. The dynamo radio flashlight is a good product. And the seller is honest.

Scott
1.0 out of 5 stars Radio has limited shelf life
Reviewed in the United States on November 24, 2017
Verified Purchase
This radio has a limited shelf life. If you intend to use it as an emergency radio, as it's advertised, and store it for any period of time, it will not work after a while. It only has a one year warranty. Epica does not back their products. The ad on Amazon reads: "OUR “THERE WHEN YOU NEED IT” GUARANTEE: Epica makes products that last ... and last. But if for any reason your Epica product doesn’t make you happy, reach out and you’ll receive our 100% refund or replacement." Here is the response I received after contacting them outside of the warranty period:

"Unfortunately, this unit is no longer covered under the one year warranty. We apologize for this inconvenience."

I advise you to spend your money elsewhere for a higher quality product.

Creature
1.0 out of 5 stars Stopped working completely after using it for less than two months. Its worthless.
Reviewed in the United States on May 1, 2016
Verified Purchase
I thought this was a good idea and it looked like it had great reviews. I was excited at first and instantly started trying out right out of the package. I took the clear tape off of the solar panel and the glass/plastic piece lifted right up! Not the tape, the part that protects the solar piece. It wasn't dropped and I only had it in my hand for 30 seconds. I pushed it back down but it will pop right back off if it were to bump against anything when I use the back clip to attach it to my person to carry around. I easily lifted it back up with my fingernail after I started writing this. I should not be able to do that (photo posted below). The adhesive can be felt underneath and its stickiness is weak at best.

Product Update: This product is worthless after owning it for less than two months. I would use it regularly at night to test out the battery life and put in in a bright window in the daytime to recharge it. When I went to use it one night when the power went out, it didn't turn on. I fumbled with it in the dark. I cranked and cranked, nothing. It is now a paperweight. The annoying "OFF" doesn't show up on the radio side anymore. This thing is utterly dead and it has been treated ever so delicately. Has not been dropped once and I have not allowed it to charge in a "hot" area. Cool bright windowsills only. Don't bother purchasing it.

This product is supposed to be relied upon for EMERGENCIES.
Read more

Sean McMullin
1.0 out of 5 stars Was AWESOME for a week....now it's in the trash
Reviewed in the United States on March 20, 2017
Verified Purchase
Bought this for my BOB. And for a week, I loved it. Solar charged(not strong,), good radio reception, decent strength light.

Then...I went to test the battery life. I left it on to drain the battery, put in under DIRECT SUNLIGHT for 6 hours. No charge. Then, I plugged it into a wall charger for 90 minutes. Nothing. Hand cranked it for about 90 seconds. Nothing.

I truly wanted this to work. Sadly, it cannot be returned now. I might have gotten the one that QC missed...but won't buy a replacement.
Read more
18 people found this helpful
Helpful
Comment Report abuse

Louis
1.0 out of 5 stars Solar Panel use, Flashlight button broke, and Battery Drains itself because the Screen always Displays "OFF"
Reviewed in the United States on July 18, 2015
Verified Purchase
First of all, I initially liked this item. However, when the time came for it to actually be used when the power went out it proved to be utterly useless. First of all, the flashlight button does not work properly making it so that you have to either hold it down to turn on the light or mash it 10-15 times before you hit it just right to click it in place. Second, the solar panel is completely useless. You might as well put a cool sticker over top of it because the thing wouldn't charge for 5 minutes of use if it orbited the sun next to Mercury. Third, and most important, when the item is off the screen displays the word "OFF" which slowly but surely drains the battery making it worthless six months later when you actually need it. I don't what genius engineer decided that an emergency battery device needed a constant reminder to its users that it was off. Usually the way you tell when something is off is when the screen is blank but apparently the makers of this item wanted a blank screen to mean "Sorry your battery died letting you know the device was off."
Read more
51 people found this helpful
Helpful
Comment Report abuse
See all reviews

Drew Avis
1.0 out of 5 stars Junk
Reviewed in Canada on June 14, 2017
Verified Purchase
I am editing my previously positive review. The radio worked fine when we received it. I recently tried to use it when we had a power outage, and it is completely dead, 3 months after we got it. Will not charge via solar or hand crank. I would avoid buying this item, it is junk.
Read more
2 people found this helpful
Report abuse

Page 1 of 1 Start overPage 1 of 1
This shopping feature will continue to load items when the Enter key is pressed. In order to navigate out of this carousel please use your heading shortcut key to navigate to the next or previous heading.
Back
Next
Pages with related products. See and discover other items: analog radio, solar and battery powered radio, survival radios, survival radio, best emergency radio, best portable emergency radio