Buy this product as Renewed and save $7.79 off the current New price.

Epica Personal Blender with Take-Along Bottle (Renewed) $17.16
Works and looks like new and backed by the Amazon Renewed Guarantee

Save or upgrade with a similar blender 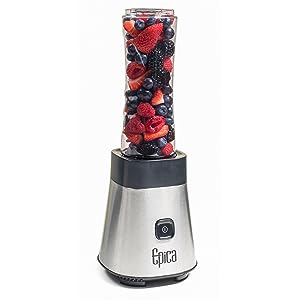 You're viewing this item 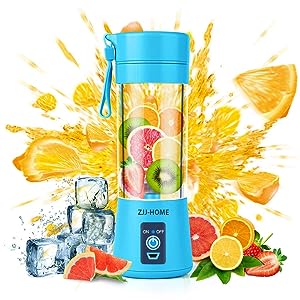 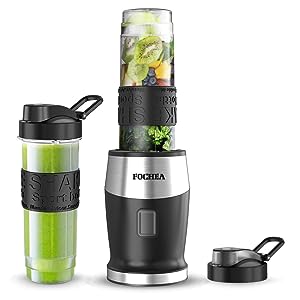 From Green Smoothie Cleanses To Bodybuilding Protein Shakes-The Epica Personal Blender is your trusted partner in your quest to live a healthy lifestyle. Sized to fit in most car cup holders, it travels easily with you on your commute to work or the gym. Versatile blender also chops nuts, whips cream, purees soups and mixes up a delightful frozen cocktail.

Cheap plastics can give off strange odors or give your beverages an odd flavor, but the high-quality Epica Blender bottle is guaranteed not to interfere with the flavors of your chosen ingredients.

Even if your personal to-go cup falls over inside your bag or car, it won’t leave a sticky mess behind because of the leak-proof lid. The jar is remarkably durable and can withstand breaking and temperatures from -40° to 175°F.

You’ll appreciate the powerful 300 watt motor and the durability of your 23,000 RPM Epica Blender, but if it fails to perform your purchase is completely covered for up to two full years.

Order Your New Epica Personal Blender Today and Discover How Easy Living a Healthy Lifestyle Can Be.

4.2 out of 5 stars
4.2 out of 5
2,085 customer ratings
How does Amazon calculate star ratings?
Amazon calculates a product’s star ratings based on a machine learned model instead of a raw data average. The model takes into account factors including the age of a rating, whether the ratings are from verified purchasers, and factors that establish reviewer trustworthiness.

d00d
5.0 out of 5 stars Is beast. Can confirm.
Reviewed in the United States on August 9, 2017
Verified Purchase
Buy it. DO IT. DO IT NOW. This thing is a bighorn ram in sheep's clothing.

I saw this pop up as a related item to who knows what I was buying and decided on an impulse to get it. It was SO cheap I felt like I couldn't NOT buy it. Plus I was tired of getting out the giant Vitamix assembly from the cupboard above the fridge every time I wanted to make myself a smoothie. I also didn't feel like cleaning that giant thing and having it take up all that counter space all the time.

That said, I also was also very tired of buying blenders, as I've had 4 of them die on me in a matter of a few years, and usually within the first year of consistent use. Like vacuum cleaners, they just aren't built to last, and the ones that are, well they're as expensive as 10 of their cheaper competitors, so you can pick your poison. There's no middle ground, and the only reason I even had a blender before the Epica is because my roommate forgot his ungodly expensive Vitamix when he moved out, and he clearly hasn't tried to make a smoothie in the last 3 years. So uh... if you see Mike go ahead and just don't bring that up. But I digress...

I love the idea of the small "bullet" type blender for single servings that can be easily used, cleaned, and stored. The ones tried previously did all that to some extent (Ninja, Magic Bullet, some Macy's brand with an Italian name I forget), but also promptly died, and two of those I would not have even tried to crush ice with. Compared to those, this thing works like you dropped a corvette engine into a chevy cruze. Unexpected beast mode. I nervously loaded ice in here for the first time, along with frozen fruit, protein, peanut butter, and who knows what else. aaaand BRRRT! Perfect smoothie. The thing barely flinched as it sliced through it all. Not only does it work way better than expected, but the stainless base blends in well in the kitchen and is small enough to leave out on the counter. Score.

Sometimes it takes a few pulses to get everything in the cup to cycle around and get crushed, and you may have to detach and shake it a bit, reattach, and then keep blending. However, it's so easy and quick to use, even with that the whole blending process takes like 30 seconds. PLUS you drink out of the cup you blended it in so you don't dirty another one, and can even take it on the go with the spill proof lid. BRILLIANT. Who hates dishes? EVERYONE SANE. Another point for the Epica.

There are downsides to the cup and they 1. are that you can't fit much in there obviously, but that comes with the territory, and that 2. it's somewhat difficult to clean. Unless you have dainty little Trump hands, its basically impossible to get your hands in there to clean with a sponge, and you would need some special brush or something to clean it really well otherwise. I usually just spray it out, swish some soapy water through, rinse. It's not perfect but it's clean enough for me. So the downsides here are that you can't make margaritas for 4 people at once, which nobody is buying it for, and that its not super easy to clean meticulously well. I can live with that and won't even take a star off for it.

One thing is for sure, you wont find a more powerful blender for anything close to what this thing is selling for. I can't speak to longevity, but I've been using it without issue for 8 months consistently, and it's so cheap that it even makes those appliance protection plans a no brainer. I bought a 3yr warranty for a whopping $3.88, so for under $29 I have a little ice-destroying beast blender, guaranteed to last 3 years. Good luck finding another deal like that.

Kindle Customer
5.0 out of 5 stars For Consumers Looking for a Huel Blender: This is for You
Reviewed in the United States on September 19, 2017
Verified Purchase
Low Maintenance: Simply rinse the blade after using and leave to dry, and quickly wash the bottle and cap after use.
Convenient: Drink directly out of the bottle used to blend, and there's a cap that can be used to bring your blend on-the-go.
Consistent: I've been using this for 3 weeks now, at least once a day, and I've had no problems.

Idk if there are many people looking for a Huel blender now that they're shipping to the U.S., but I would definitely recommend this personal blender if you are. I add 500ml of water (between the 400ml and 600ml line), 2 1/2 scoops of Huel (although that's more than most people use), and a small glob of honey, and it blends wonderfully in about 10 seconds. I've had no problems with it as of yet, and even if I did, I'd be fine with buying a new one every few months for how cheap they are.

Kindle Customer
5.0 out of 5 stars This is a great little blender
Reviewed in the United States on July 12, 2016
Verified Purchase
It's exactly what I need for protein shakes and smoothies, made right in the drinking container, no messy pouring into another container and then having both the blender and drink container to wash. Cleans easily and doesn't take up much room on the counter. Very happy with my purchase!
Read more
44 people found this helpful
Helpful
Comment Report abuse

LaToya P. Lawson
2.0 out of 5 stars I was devastated when my favorite blender broke a few weeks ago after 3 years ...
Reviewed in the United States on January 12, 2018
Verified Purchase
I had such high hopes for this blender! I was devastated when my favorite blender broke a few weeks ago after 3 years of faithful service. So, when I saw the option of getting this little personal blender that I could take along with me to work or the gym I was excited! I did the necessary research, or so I thought, and decided to buy the Epica. I waited a few days before opening it, but when I finally got around to making my first smoothie (that only contained fresh fruit and almond milk - no ice) I was a little worried about what the future might hold. Well, the first day was good, but it was a little noisy and had a bit of an odor from the blade. Fast forward to the next morning (today) when I attempted to make my morning smoothie...the blender made loud noises and all of a sudden the contents began to come out of the bottom by the blade. When I removed the bottle, the bottom was soaked in liquid. Needless to say, I was not happy...I will be sending this one back for a full refund.
Read more

Kasey
5.0 out of 5 stars Works Great, A lot better than expected
Reviewed in the United States on March 26, 2017
Verified Purchase
I use this for making a smoothie out of almonds, ice cream, peanut butter, chocolate syrup, a banana, and milk. It does a awesome job, a lot better than I thought it would for the price. It takes probably 40-50 seconds to liquefy the contents of what I'm using. Also very easy to clean and assemble. The manual does state its not recommend for ice and a few other thicker ingredients. So if you are wanting to use ice this blender probably is not for you. Other wise I recommend it %100
Read more
11 people found this helpful
Helpful
Comment Report abuse

Jessica
3.0 out of 5 stars Cheap
Reviewed in the United States on December 14, 2017
Verified Purchase
Can't really handle ice like you'd hope. I had to let my frozen fruits and vegetables defrost before putting them in here. Sometimes I had to cut them, too. If I'm gonna have to do all this prep work, I'd rather just pay more money for a more effective blender.
Read more
18 people found this helpful
Helpful
Comment Report abuse

Page 1 of 1 Start overPage 1 of 1
This shopping feature will continue to load items when the Enter key is pressed. In order to navigate out of this carousel please use your heading shortcut key to navigate to the next or previous heading.
Back
Next
Pages with related products. See and discover other items: blender soups, blenders for shakes, drink blenders, electric mixer, sauce blender, best small blender for smoothies