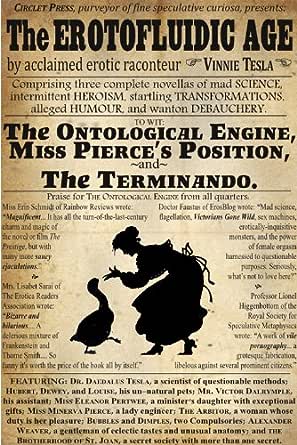 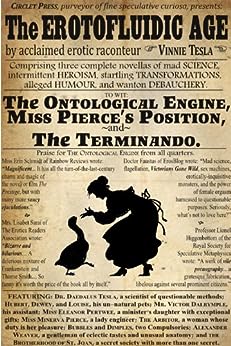 Vinnie Tesla has worked (or at least drawn a paycheck) as a whitewater guide, information architect, bicycle deliveryman (by, not of), porn video reviewer, and desktop publisher. His purchase, in adolescence, of a mass-market paperback of The Pearl was undoubtedly the pivotal event that turned him towards his calling as a fake Victorian pornographer. His subsequent internship at Circlet Press was just the icing on the cake. He has an intermittent blog at journal.vinnietesla.com and a bunch of free fiction online at vinnietesla.com/stories, including Victim/Victorian, the pornographic novella to which The Erotofluidic Age is a prequel. --This text refers to the paperback edition.

Julie Anne Behrens
5.0 out of 5 stars Pure Awesome a la Victorian Erotica
Reviewed in the United States on September 5, 2012
Verified Purchase
I will be honest. I love Vinnie Tesla's writing, so maybe this review is a little biased. But I gotta encourage everyone to read this book!

I bought a copy of it when I was feeling down and out. A little Tesla, I figured, was exactly what I needed to cheer me up. And it was so true! Within a few pages, I was both laughing and turned on. That's difficult balance to strike, and Tesla does it perfectly, like a frickin' tightrope walker. There is a lot of Victorian outrage ("MADAM! I dare say!"), social awkwardness, wonderfully imagery and vivid characters that are just about perfect. Tesla's voice is very consistent. More than just a good story, the book is WELL WRITTEN. Anyone who has thrown a book across the room for its crappy writing will know what I'm talking about. Dude is really good. Since I write too, that's important to me.

So do yourself a favor and read this book. Uh, when you have some time to yourself. Don't let your mom read it over your shoulder; she'll be scandalized.
Read more
One person found this helpful
Helpful
Comment Report abuse

Seth Kadath
5.0 out of 5 stars Some of the best and most creative erotica to be found
Reviewed in the United States on December 27, 2011
Verified Purchase
I thought a book written in the style of old Victorian erotica would quickly become tiresome and dull, but I was wrong. This book is hilarious.

This book is also sexier than a lot of erotica I've read, and boasts plot and setting that does more than just prop up the sex.

Sarah Morehouse
5.0 out of 5 stars Hilarious and hot. Very hot.
Reviewed in the United States on May 3, 2012
Verified Purchase
Do not think that you can get away with reading this in the other room while your spouse sleeps. The will hear you howling with laughter and when they come to check on you, they will find you all flushed and bodice-ripped. No, far better to read it out loud to them. You'll be torn between wanting to stop for a quick tumble after the hot bits, or read on to see what happens next in this page-turning comedy of nookie.
Read more
One person found this helpful
Helpful
Comment Report abuse

Dreda
5.0 out of 5 stars Salacious, erudite, delicious
Reviewed in the United States on September 14, 2011
Verified Purchase
So rarely does one find smut that not only satisfyingly arouses the reader but also flatters her intellect. Mr. Tesla has written a wonderfully salacious series of stories that carry off the trick of being wonderfully, filthily perverse and yet exist in a setting wherein a naughty Cartesian joke seems entirely in keeping.

Do buy this book, and enjoy the fact that the e-book format lets you bring it with you everywhere, even into the linen closet; do not, however, let that blind you to the fact that it would be unwise to read this stories when you have no immediate opportunity to gratify the urges that they will undoubtedly engender.

T. Carlson
5.0 out of 5 stars Weird but Delightful
Reviewed in the United States on August 10, 2015
Verified Purchase
This is really weird, but delightful, steampunk erotica. I recommend it highly for weird people.
Read more
One person found this helpful
Helpful
Comment Report abuse

paintcan
4.0 out of 5 stars Its different, that's for sure.....
Reviewed in the United States on February 9, 2014
Verified Purchase
..Reminds me a lot of Harry Potter in language,tone and sciences & experiments. It's erotic as all get out and grabs your attention. That is a particular talent in an age where sexually explicit - well everything - is available at every turn. That being said this is adults only stuff.
If any of the above tends to offend you don't read this book. If any of the above tends to interest you, give it a try.
Read more
One person found this helpful
Helpful
Comment Report abuse

Ruth D Alfasso
4.0 out of 5 stars Steampunk smut -- exactly what it says it is and more
Reviewed in the United States on September 15, 2011
First a disclosure: Vinnie is a friend of mine and Erotica is not my usual fare. In fact, I've gotten rather tired of the whole Steampunk thing already, too. That said, I read this book; I found it hard to put down and rather enjoyed it. There is rather more -- and better -- plot and characterization than I expected. The sex is varied and vivid, although often silly and sometimes a bit cruel. There is humor throughout, sometimes of the in-jokes and anachronism type but mostly arising from the characters and the world in which they act. If the idea of erotic steampunk amuses or excites you, this will probably hit the spot very nicely.
Read more
Helpful
Comment Report abuse
See all reviews