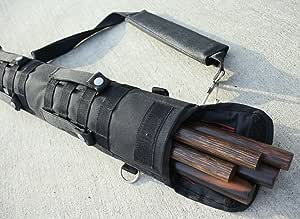 Brand: Arnis Authority
4.2 out of 5 stars 52 ratings
| 5 answered questions
Currently unavailable.
We don't know when or if this item will be back in stock.

This is the newly designed Tactical Arnis Carrying Case v2.0. The research and design team at Arnis Authority collected feedback and spent hours enhancing the design. To make We used new fabric to make it lighter weight while using lesser of the material so we can reduce our pollution and carbon footprint. It is is the most ideal way to haul your arnis and long sport equipment like guns, swords, or bow and arrows. The extra padding and super sticky Velcro allows you to haul your sticks silently and securely. Both sides of the bag has MOLLE straps allowing you to attach other gear.

4.2 out of 5 stars
4.2 out of 5
52 global ratings
How are ratings calculated?
To calculate the overall star rating and percentage breakdown by star, we don’t use a simple average. Instead, our system considers things like how recent a review is and if the reviewer bought the item on Amazon. It also analyzes reviews to verify trustworthiness.

Horace
3.0 out of 5 stars Good bag, but know what you're getting going in.
Reviewed in the United States on December 15, 2012
Verified Purchase
This is a good bag, but do NOT go by the picture.

First and foremost, this bag is not made for 6 sticks. Not if you plan to close it. Luckily, I read other reviews first and only have one pair of sticks, so I didn't mind. However, the bag in the pic doesn't have the sticks jutting out just because it makes for a nice product photo. It is actually way overpacked (the sticks are thin and still they must've had to cram those in there).

Second, it is a little heavy for the amount it can hold. I maxed it out at two pair, and then it BARELY closed. Maybe it was designed for something else entirely, and repurposed for Arnis Authority. Perhaps something heavier. It'd be perfect for carrying a couple swapout .223 carbine barrels.

Third, and despite the Molle straps (which seem solid), make no mistake about the "tactical" nature of this bag. It is PURELY a novelty. The metal snaps and rings are silver and make a very audible, very non-tactical jingling. The snaps should be enameled black and the rings should be black plastic coated to be realistically considered tactical. I've thought about enameling the snaps myself and replacing the rings with tactical plastic ones, but it's not like I'm heading into combat, and if I were I wouldn't be bringing sticks to a gunfight. Come to think about it, I don't even know why you would need a stick bag to be tactical :-P

Lastly, the configuration of the Molle straps on the bag in the picture are entirely different from the one I received. I'm sure it's not even the same product. But for 20 bucks, it's still a good bag.

Otherwise, it's a nice, masculine bag. I think I'll enjoy it.

Ken Rowe
2.0 out of 5 stars I wouldn't buy this again. It holds 4 medium ...
Reviewed in the United States on November 27, 2017
Verified Purchase
I wouldn't buy this again. It holds 4 medium thick sticks ok, 2 sticks plus 2 padded 26" sticks don't really fit, no room for anything else. The velcro became junk after 3 months of use I think. All the snaps and "tactical" looking straps serve little purpose. The carrying strap is connected with poorly chosen hardware, not a big problem, but the giant hooks they use dig in to your shoulder. I would opt for a roll-up style bag if I could go back. It came with a little fanny pack looking back that got tucked away and never used.
Read more
2 people found this helpful
Helpful
Comment Report abuse

kohlio
4.0 out of 5 stars good bag, fits 4 regular sticks comfortably
Reviewed in the United States on May 16, 2014
Verified Purchase
I've been using this bag for a little over a month now with 4 escrima sticks in it and they fit well, allowing the bag to close (not close tight mind you but close enough so that the sticks won't fall out). I had been keeping 2 regular rattan sticks as well as 2 polypropylene Cold Steel escrima sticks (a little thicker than rattan) in the case. The case was a VERY tight fit when I tried to put my foam sticks in with my rattan sticks so I wouldn't recommend that.

The molle straps came in handy as I attached the case to a tactical pack so I can jog to my kung fu classes. The case fits tight up against the pack although I also used the straps on the bag to keep it in place.

Like other reviewers I agree that this case could be bigger as to accommodate more sticks but it fits my needs pretty well.
Read more
Helpful
Comment Report abuse

ronald k
1.0 out of 5 stars Do not believe the response that this bag fits 31 inch sticks
Reviewed in the United States on August 21, 2020
Verified Purchase
The seller states in the Customer Questions section that there's a flap at the base to allow 31 inch sticks to fit. I just received and it does not even come close. The sticks extend out of the bag almost to where the velcro begin so there is no way to close the bag. WHAT IS THE POINT OF A CASE IN WHICH YOU'RE EQUIPMENT CAN'T BE SECURED? If the answer was you can put your sticks in but not close the case than I would not have ordered this. Deceptive.
Read more
Helpful
Comment Report abuse

Jim
5.0 out of 5 stars Excellent Kit Bag
Reviewed in the United States on November 20, 2017
Verified Purchase
This bag was perfect! It's also strong and padded to protect your gear. Was wrapped great, delivered fast. The MOLLE gear on the back holds my other gear securely in place. The adjustable strap is a nice touch, this bag holds my Kali sticks and karambit nicely (it'll hold two sets or 4 sticks) I'll be ordering another.
Read more
Helpful
Comment Report abuse

DS
2.0 out of 5 stars Not what you expect - Disappointed with capacity
Reviewed in the United States on October 25, 2012
Verified Purchase
Overall quality of the bag construction is solid, think of a shot gun case modified.

The BIG problem is that there is NO WAY to fit more than 3 sticks in the bag and successfully close the flap. I was very disappointed so I checked the description and photo again. That is when I figured it out - NO WAY THAT FLAP IS CLOSING IN THE PHOTO WITH 6 STICKS.

I am not sure why the manufacturer over sold us on the capacity instead of just being straight forward, especially in light of the solid construction of the bag.
Read more
9 people found this helpful
Helpful
Comment Report abuse

MC93
4.0 out of 5 stars Great Bag for the Price
Reviewed in the United States on June 28, 2012
Verified Purchase
This is a great escrima case, and the low price makes for an easy decision. Of course, I bought it because it looked original and very epic in the pics, but I was surprised at how well made it is. It can comfortably hold 3 pairs of 26"-30" sticks; in my case the case would hold a pair of rattan sticks, a pair of kamagong, and a pair of bahi. I also own a 26 inch straight kris moro sword with wooden sheath, and this case can carry it around very easily. The inside is also heavily padded, thus making less noise when carrying around. The item description does not say, but the strap is indeed adjustable, so if you want to wear the case across the back diagonally, you can easily make it so.

The only reason why I gave this product 4 stars instead of 5 is because of the fact that there are no side pockets for any training knives or palm sticks. However, the MOLLE straps make way for customization, and I intend on finding a simple way to add another pocket.