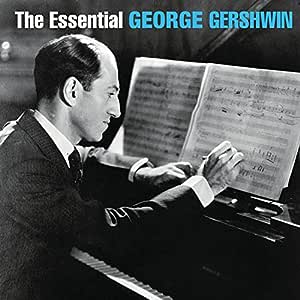 2 CDs of Gershwin's greatest compositions, sung and played by the preeminent artists in the Columbia vaults! Includes Swanee Al Jolson; Someone to Watch over Me Frank Sinatra; Summertime Billie Holiday; Soon Dorothy Kirsten; Let's Call the Whole Thing Off Fred Astaire; But Not for Me Doris Day; I've Got a Crush on You Ella Fitzgerald; Of Thee I Sing Hi-Lo's; Prelude No. 2 played by Gershwin himself, and more. 41 strokes of genius!

Given his seemingly effortless ability at melding such disparate forms as jazz and gospel with his own rare melodic gifts, it's not hard to view George Gershwin as America's first classical crossover artist. But as this glorious, 41-track double-disc introduction to Gershwin's epochal repertoire quickly demonstrates, that assessment woefully shortchanges the sheer grandeur of "Rhapsody in Blue" or the sultry earthiness of "Summertime." Singer and pop musicologist Michael Feinstein produced the set (as well as contributing a new recording of "Home Blues"), and under his guidance it understandably leans toward Gershwin's remarkable body of songcraft, though it also includes more concert-oriented pieces such as the "Rhapsody" and "Prelude No. 2," both in original performances by the composer. But Feinstein's loving sense of American pop song history insures that the performances here are both inspired and enlightening. Indeed, his choices represent not only a who's who of 20th-century pop and saloon singers--spanning a rich pantheon that includes Jolson, Kelly, Astaire, Holliday, Sinatra, Bennett, Waters, Torme, Clooney, Day, Vaughan, and Fitzgerald--but deftly underscore Gershwin's transcendent synthesis of style, era, and distinctly American subject matter. Also includes a written tribute by modern songwriter Diane Warren and an essay by Pulitzer Prize winner Tim Page. -Jerry McCulley

4.3 out of 5 stars
4.3 out of 5
85 customer ratings
How does Amazon calculate star ratings?
Amazon calculates a product’s star ratings based on a machine learned model instead of a raw data average. The model takes into account factors including the age of a rating, whether the ratings are from verified purchasers, and factors that establish reviewer trustworthiness.
Top reviews

Amazon Customer
4.0 out of 5 stars For the true purist of George Gershwin music.
Reviewed in the United States on May 29, 2019
Verified Purchase
You need to be a true purist of George Gershwin music. A lot of the songs are done by the original artist & not necessarily up to singing standards nor preferences of today. I loved it myself.
Read more
One person found this helpful
Helpful
Comment Report abuse

audrey frances
TOP 1000 REVIEWER
5.0 out of 5 stars 's wonderful, 's marvelous
Reviewed in the United States on June 1, 2003
Verified Purchase
If you have any interest in American music of the early 20th century in general, or George Gershwin in particular, you will not be able to look at the playlist to this remarkable 2-dvd set without salivating. This is a who's who of talent beginning with Gershwin himself (Prelude No. 2 for Piano and Rhapsody in Blue) and continuing on with Fred Astaire, Rosemary Clooney, Gene Kelly, Al Jolson, Doris Day, Aretha Franklin, Billie Holiday, Cab Calloway, Benny Goodman, Frank Sinatra, Harry James, Mel Torme, Miles Davis, Sarah Vaughan and Tony Bennett. The sound quality is surprisingly good and the selection is magnificent, the songs presenting a wonderful and vivid protrait of the American music scene in the early part of the 20th century. (Even though Gershwin died in 1937, singers and bandleaders have been performing his songs ever since.)

The accompanying booklet contains fine essays by music critic Tim Page and composer Diane Warren, as well as liner notes for each of the 41 selections, and a few pictures.

bootzin
5.0 out of 5 stars Deeply Familiar
Reviewed in the United States on October 11, 2013
Verified Purchase
Needless to say, these melodies and songs are timeless gems. Not to sound cliché or redundant, but classics are just
that, for stirring something deep in ones soul, that seems comfortable, and lovingly human. My grandmother kept coming to mind,
picturing her knowing the words to all of these, when I used to visit. Now I'm enjoying these so much, I put it on for several days
in a row for a good week.
Read more
5 people found this helpful
Helpful
Comment Report abuse

Who cares
5.0 out of 5 stars If you like Gershwin and singers of the 30's, 40's and 50's then this is amust.
Reviewed in the United States on April 3, 2014
Verified Purchase
First you have to like Gershwin music then love to listen to the singers of way old. The sounds is good for the most part but it hard to clean up old, old records, that are of archive quality and permission to use them from record companies and families of deceased singers.
Read more
One person found this helpful
Helpful
Comment Report abuse

Philip Weismehl
5.0 out of 5 stars Wonderful Gershwin Collection
Reviewed in the United States on August 12, 2013
Verified Purchase
Have always enjoyed Gershwin's music. Recently saw one man show "Gershwin Alone" which prompted me to augment my home music collection. This was the ideal collection to fill that need. "Essential" is a good title since it includes many of the Gershwin classics, some performed by George Gershwin himself and others by the artists that made the classical renditions of so many compositions.
Read more
Helpful
Comment Report abuse
See all reviews from the United States

sheila ward
5.0 out of 5 stars Good value
Reviewed in the United Kingdom on September 30, 2018
Verified Purchase
As expected
Read more
Helpful
Sending feedback...
Thank you for your feedback.
Sorry, we failed to record your vote. Please try again
Report abuse

novice reviewer
4.0 out of 5 stars Gershwin All Rounder
Reviewed in the United Kingdom on September 30, 2013
Verified Purchase
Initially I was only aware of the standard Gershwin - Walking the Dog, Rapsody in Blue, however after listening to this CD I was surprised at how much other Gershwin creations I was familiar with and was happily introduced to others that were completely new to me. For the non music connoiseur it is an enjoyable listen and great to have on in the back ground.
Read more
7 people found this helpful
Helpful
Sending feedback...
Thank you for your feedback.
Sorry, we failed to record your vote. Please try again
Report abuse

One singular sensation...
4.0 out of 5 stars Sometimes it is nice to revisit the past and discover something new
Reviewed in Canada on February 22, 2015
Verified Purchase
At first glance I wasn't even tempted to buy this CD. I had most of the songs, all but two, in fact, and generally on original cast recordings. But then I realized that these were not at all going to be the same, in most cases, but popular versions, the old fashioned singles of eons ago. So I took a little bit of a chance, and purchased it.
It was a good move.
There are about six bands that I would have cast aside as too mundane, too uninspiring in their presentation, but with most of them, it was comfortable to hear Gershwin done outside the confines of a theatre stage or concert hall. The movie cuts were suddenly not that special either as they were far too familiar and needed their jewel-box settings.
It was the other songs, some by singers I had never heard of, some song versions that had never been released at all before now.
In a major way, this set compliments all the other Gershwin CDs I have, very nicely.
I'm now wondering what other treasures are sitting hidden away in the storage vaults of the various recording companies. As an example, Johnny Mathis recorded one set of Broadway songs, and it sold well. Yet the other set he recorded was never released...until about two years ago. Makes me wonder what recordings of Peggy Lee, Lena Horne("You Got Class"?), Tony Bennett, Rosemary Clooney, and even Frank Sinatra are on shelves or boxes fading away.
Read more
One person found this helpful
Helpful
Sending feedback...
Thank you for your feedback.
Sorry, we failed to record your vote. Please try again
Report abuse

Vincze Miklós
5.0 out of 5 stars The Essential George Gershwin
Reviewed in the United Kingdom on April 25, 2014
Verified Purchase
The album I ordered arrived in time and in perfect condition. This cd I bought as used, I think it was rated like new, and it is quite true. Thank you.
Read more
One person found this helpful
Helpful
Sending feedback...
Thank you for your feedback.
Sorry, we failed to record your vote. Please try again
Report abuse