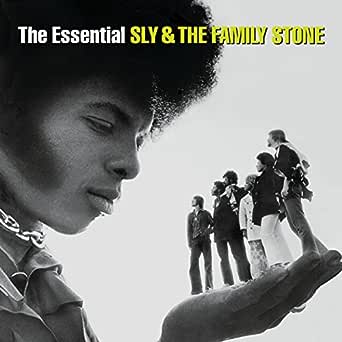 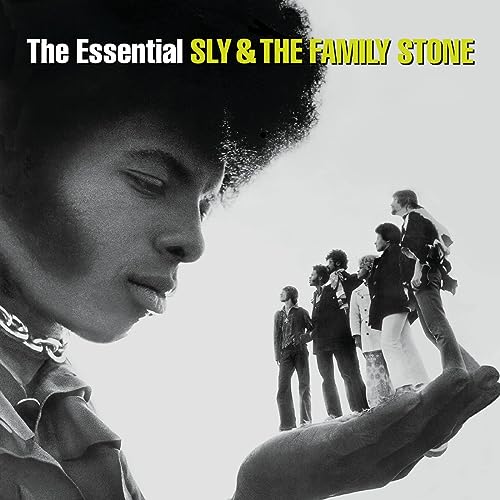 The Essential Sly & The Family Stone

4.7 out of 5 stars
4.7 out of 5
193 global ratings
How are ratings calculated?
To calculate the overall star rating and percentage breakdown by star, we don’t use a simple average. Instead, our system considers things like how recent a review is and if the reviewer bought the item on Amazon. It also analyzes reviews to verify trustworthiness.
Top reviews

NoChina
5.0 out of 5 stars Perfect sonically mixed tracks and track list lacks no great ...
Reviewed in the United States on September 9, 2014
Verified Purchase
Wow. Its about time they got one right. Perfect sonically mixed tracks and track list lacks
no great Sylvester masterpiece. I immediately noticed a huge difference with this vs some other
old cds I had over the years. This is more bass and mid range perfection. Nothing missing, nothing added.
This isn't the tinny, clanky sounds that some remasters deliver, but its far more flat and heavy, which are good
adjectives for listening to music with a purists ear like mine. When 'Sing a Simple Song' came on, I about wrecked
the damn car! It was SO awesome. And Runnin Away remains one of my favorites. Some folks like to banter
about with mixes by Prince or Michael Jackson, which are noteworthy artists, but I believe now without a doubt that Prince
didn't just form out of nothing in all his skills (musically or production-wise). I think he looked back at this heavy cat and realized he could (and
should) copy some of his mojo and take it a different direction. You can hear Prince borrowing from Sly quite a bit in fact.
But it all started here, -and Mr James Brown of course. Cheers!

Michael Stack
VINE VOICE
5.0 out of 5 stars A fine introduction to a great band.
Reviewed in the United States on May 18, 2007
Verified Purchase
A superb overview of an essential musician who has been somewhat dismissed, "The Essential Sly and the Family Stone" presents a picture of just what this incredibly important band was all about. Formed by songwriter/producer/one-time DJ Sly Stone, the band was in many ways an extension of him and his vision, beginning as a pop/funk/soul outfit and quickly evolving into something altogether different, rewriting all the rules along the way. The early recordings have much more of a band feel, anchored by the incomporable rhythm section of Larry Graham and Gregg Errico. Both would leave the band as Sly Stone's vision seemed to become more exclusive and the band seemed to become a reflection of the darkness that was growing inside of him.

But enough hyperbole-- the music itself, presented in fine remastered sound, includes virtually all their singles for Epic and a number of album tracks, with particular emphasis on "Stand!" (seven cuts), "There's a Riot Goin' On" (eight) and "Fresh" (six). As I've often thought the three of these were far and away superior than everything else the band ever did, I'm alright with this. With the presentation chronological, you can hear the band rising from an older funk sound ("Underdog") to the commercial pop forced by the record label ("Dance to the Music") to eventually into a sunny sort of optimistic funk/soul ("Life"). Had the band stopped when they did find their own sound, they dismissal of them would make sense, but instead Stone's artistry became increasingly more dense, more personal, and more powerful. There are few records out there as direct and potent as "Stand!" and "There's a Riot Goin' On", the former perhaps the summation of the California dream ("Stand!", huge hit "Everyday People"), the latter being a reflection of its failure ("Luv N' Haight", "(You Caught Me) Smilin'"). Along with all this are many songs that have worked their way into collective consciousness-- the aformentioned "Everyday People", "Sing a Simple Song", "Everybody is a Star", "Hot Fun in the Summertime", "If You Want Me To Stay"... when I first started listening to Sly and the Family Stone only recently, I was shocked how much of this material I knew.

For fans, in the wake of the recent batch of remasters, this is somewhat undervalued with the band's first seven albums available in remastered sound. This does however include the two singles that were omitted from that remasters-- "Hot Fun in the Summertime" and double-A side "Thank You (Falettinme Be Mice Elf Agin)"/"Everybody is a Star". There's also one track from Sly Stone solo record "High On You" ("I Get High on You"), which has not been reissued.

Sly and the Family Stone's place in music history is a bit undervalued, and I think this collection can go some way towards reconciling that. For the uninitiated, this is the place to start. Highly recommended.
Read more
14 people found this helpful
Helpful
Comment Report abuse

David C. Tanner
5.0 out of 5 stars You may still need this even if you bought "the collection"
Reviewed in the United States on May 13, 2007
Verified Purchase
At first I bought "The anthology" (the single disc 20 track complilation), I wanted more so I bought Stand, There's a riot going on and Stand.

It wasn't until years later they came out with the "Essential Sly and the Family Stone". This is an excellent collection and feels more complete than "the anthology".

However, now the Collection (seven sly albums remastered and with bonus tracks) is out.

You would think that the Collection would have ALL the Sly tracks. BUT IT DOESN'T. Three singles (that were not on any albums and were singles only) are not in the collection, "Thank you" "Hot Fun in the Summertime" and "Everyone is a Star". As far as I know, these three tracks are only on compliations i.e. "Greatest Hits" "The Anthology" and "The Essential Sly and the Family Stone". The Essential is the only one that is remastered. (It usually makes little difference when they "remaster" tracks but the stereo versions of "Thank You" and "Hot Fun" do sound better).

If you need all the Sly tracks, you might need this for those three tracks. If you want a good compilation of some of sly's best tracks, well, this is the better of the three.
CORRECTION: The Sly and the Family Stone Collection seemed to have gone up to about 65 dollars (it was 55 the last time I checked which is about a week ago)
Read more
13 people found this helpful
Helpful
Comment Report abuse

Zub
4.0 out of 5 stars Almost...
Reviewed in the United States on May 25, 2003
Verified Purchase
Dubbed "Essential", this career retrospective/greatest hits/best of Sly and the Family Stone effort surpasses all such collections that have preceeded it. Content-wise, nearly every charting single is represented yet with two discs to work with one wonders why "Smilin'" a modest hit from '72, is absent while nearly half of the tracks are album cuts or non-charting singles.

And while the liner notes booklet does provide track details (with a few minor errors), a few pics and a meager group history, this is not the strong point of this piece. The biggest appeal in this set - besides being a nearly complete musical overview - is the vast improvement in sonic quality. Every track is in crystalline stereo, often a revelatory improvement over what has appeared on previous Sly CD's. If you're looking to purchase a Sly best-of compilation, look no further. If you already own previously issued collections, this piece is worth having for the sonic improvements alone. With its minor flaws, this still represents the best Sly "best" to come along.
Read more
11 people found this helpful
Helpful
Comment Report abuse

kevin j spear
5.0 out of 5 stars old tunes
Reviewed in the United States on June 21, 2013
Verified Purchase
if you remember Woodstock, the original from the 60's and i'm not talking about that crappy from the 90's, and seen sly's performance in the movie this compiolation will bring those good vibes back. this is worth the money it doesn't matter if you're white or black or whatever the beat of sly's music will get you to dance to the music. and if ypo don't like it, well all I can say is different strokes for different folks. ha ha ha . but really it's is worth it. i'm so glad I found this
Read more
Helpful
Comment Report abuse
See all reviews

warwick bergin
5.0 out of 5 stars Brilliant!
Reviewed in the United Kingdom on February 3, 2019
Verified Purchase
I know why I bought this... brilliant!
Read more
2 people found this helpful
Report abuse

elsa griggs
5.0 out of 5 stars Unexpected pleasant surprise!
Reviewed in the United Kingdom on August 27, 2011
Verified Purchase
As much as i am already aware how soulful & uplifting sly & family stone can be, i was blown away how this cd could improve on the cd compilation i already own.
Read more
2 people found this helpful
Report abuse

Mr S
5.0 out of 5 stars It's a Family Affair
Reviewed in the United Kingdom on November 13, 2017
Verified Purchase
A perfect introduction to the band across 2 packed discs.
Read more
One person found this helpful
Report abuse

Sherif Laoun
4.0 out of 5 stars Essential for all music fans.
Reviewed in Canada on May 31, 2014
Verified Purchase
It's easy to hear why Sly and the Family Stone are among the pillars of r n b, funk, rock,hip hop and all dance music that has followed. They don't get quite the press that George Clinton and James Brown get, but they have all the respect.
All the hits are in this collection that is peppered with nuggets to discover- new to you as NBC used to say about their reruns.
Sly and the Family Stone is a must for all music fans, music fans in the widest possible definiton. The Essential Sly and the Family Stone is great for someone who wants more than just the hits but who's not willing to get every album.
Read more
Report abuse
See all reviews