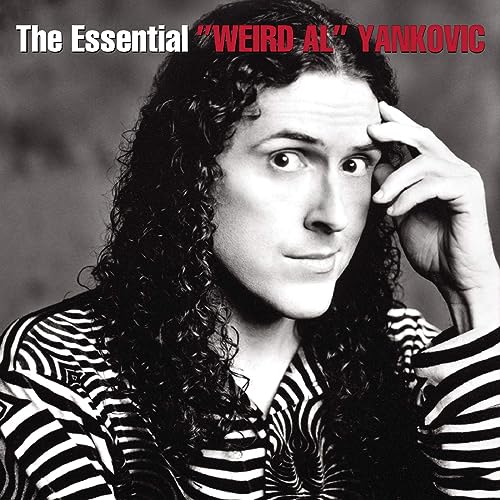 4.8 out of 5 stars
4.8 out of 5
513 global ratings
How are ratings calculated?
To calculate the overall star rating and percentage breakdown by star, we don’t use a simple average. Instead, our system considers things like how recent a review is and if the reviewer bought the item on Amazon. It also analyzes reviews to verify trustworthiness.

DeathOfTime
2.0 out of 5 stars songs are to quiet
Reviewed in the United States on July 21, 2020
Verified Purchase
songs on the digital version are much quieter then the rest of my collection. making it impossible to use this in a playlist. to hear it properly i would have to blast the rest of the music in my collection
Read more
2 people found this helpful
Helpful
Report abuse

Attila The Shopper
5.0 out of 5 stars A Great Set !
Reviewed in the United States on December 22, 2019
Verified Purchase
This is a well priced, two-c.d. set! It arrived in good condition, unlike other albums I've recently ordered from Amazon. If you like Weird Al, even if you don't have his other albums, try this. It has a good sampling of his albums, save his last two, which were not out yet when this was released. For me, like Ray Stevens, Weird Al is great for his social commentary. I enjoy listening to this when I need a good laugh. Highly recommend this!
Read more
Helpful
Report abuse

Avery Abernethy
4.0 out of 5 stars Good Compilation for the Time Period
Reviewed in the United States on March 16, 2016
Verified Purchase
An excellent compilation of both his hits and overlooked work.

Those unfamiliar with his earliest recordings may be surprised by their low technical quality. Al started out playing a solo accordion in low tech recording environment. Many found out about him from the syndicated "Dr. Demento" radio show in the 1970s. After acquiring a full band his music was much more technically proficient. Purchasers can see the evolution of a one-man accordion parody song writer to a full band with solid playing ability doing song parodies.
Read more
2 people found this helpful
Helpful
Report abuse

Michael H. Weekley
5.0 out of 5 stars Funny!
Reviewed in the United States on May 20, 2019
Verified Purchase
I was introduced to Weird Al in college and saw some of his videos. I was astonished. Al takes well known songs/tunes and turns the into satire. I'm sure some musicians/writers enjoyed his comedies just as much as the rest of us do. I'm sure you can watch them on YouTube to cut your ear teeth on. Enjoy.
Read more
Helpful
Report abuse

Cade_One
5.0 out of 5 stars The Best of Weird Al (sort of)
Reviewed in the United States on March 2, 2018
Verified Purchase
Bummed that "I Want a New Duck" was not on here, but some of favorites are on here. If you want to introduce your kids to the wonderful world of Weird Al, get them this CD! My daughter has listened to it about as much as I did my old cassette tapes.
Read more
5 people found this helpful
Helpful
Report abuse

DTroppens
5.0 out of 5 stars Great album
Reviewed in the United States on March 23, 2021
Verified Purchase
If you are a Weird Al fan and you are going on a trip to the Biggest Ball of Twine in Minnesota, bring the album. It doesn't include songs from a couple of the more current albums, but it has a great selection from all of the others.
Read more
Helpful
Report abuse

Gena Chereck
5.0 out of 5 stars A parodist looks at 50
Reviewed in the United States on February 14, 2010
Verified Purchase
To begin with, "Weird Al" Yankovic -- who just turned 50 last year -- is someone I always forget how much I've liked until I happen to hear a new song from him. I heard the Michael Jackson parody "Eat It" sometime in the 1980s when I was very young, and I thought it was a hoot; after that, listening to The Dr. Demento Show in the early '90s, I was introduced to songs like "Fat," "Smells Like Nirvana" (my personal fave), the Beach Boys pastiche "Trigger Happy," and "You Don't Love Me Anymore." A few years later, the Coolio parody "Amish Paradise" came along, and in 1999 I caught "The Saga Begins" (the plot of Star Wars Episode 1: The Phantom Menace set to the tune of "American Pie") and VH1's cheeky Behind The Music special. Then "White & Nerdy" and the hysterical charity-single goof "Don't Download This Song" caught my attention in 2006. All of the aforementioned tracks are included in this 2-disc, 38-track Essential collection -- indeed, it's the Weird Al retrospective I've been waiting for.

Al's first 8 albums (from 1983 to 1993) have been anthologized many times before -- on two volumes of Greatest Hits, the box set Permanent Record, The Food Album, The TV Album -- and now they're revisited on Disc 1 of this set. But this set is the first time his 4 albums from 1996 to 2006 have received the best-of treatment; this period is covered on Disc 2. Given that the tracks on Essential were picked by the man himself -- including a mix of hits, his personal favorites, and fan faves -- I can't really argue with what he apparently feels is his best and most enduring work. Anyway, this was meant as an introduction for beginning fans, and besides, any compilation NOT specifically based on which songs were released as singles and/or how high they charted is bound to come up short for longtime fans. (For the record, from what little I've heard on the radio, I'm already missing "Stop Draggin' My Car Around," "Christmas At Ground Zero," "When I Was Your Age," "Couch Potato," and "Ode To A Superhero.")

Frankly, I'd rather address what actually IS here. Though Weird Al is most widely known for his parodies of Top 40 pop hits ("Like A Surgeon," "eBay") and rock classics ("Yoda," "Jurassic Park"), his original tunes are often equally accomplished -- from twisted love songs like the nasty heartbreak ballad "One More Minute," the power pop-y "Melanie" and the doo-wop ditty "Since You've Been Gone," to the off-the-wall narratives of "The Biggest Ball Of Twine In Minnesota" and "Albuquerque," to the remarkable rapid-fire sections of "Your Horoscope For Today" and "Hardware Store." Furthermore, he and his longtime bandmates -- drummer Jon "Bermuda" Schwartz, bassist Steve Jay, and guitarist Jim West -- prove themselves incredibly versatile performers, moving deftly from polka (the covers medley "Polkas On 45") to New Wave ("Dare To Be Stupid" and "Dog Eat Dog," dead-on "style parodies" of Devo and the Talking Heads, respectively) to rap and R&B ("It's All About The Pentiums," "Trapped In The Drive-Thru") to symphonic pop (the Brian Wilson homage "Pancreas"). Regardless of whether or not you think Al's lyrical jokes hold up, you really can't deny the sheer craftsmanship that went into the music.

Weird Al's career has lasted a good 30 years (which is as long as I've been *alive*), outlasting the careers of most of the artists he's parodied. Early on, after his accordion-driven self-titled 1983 debut (represented here only by "Another One Rides The Bus," an acoustic single he had actually recorded in 1980), he and his band realized the best jokes are told with a straight face rather than with a giggle; throughout this set's 2-and-a-half+ hours, you can follow the band's musical growth, as well as Al's knack for keeping up with current trends without altering himself in any fundamental sense (i.e. occasional mild vulgarity and gross-out humor aside, his lyrics are intended for a general audience, and have never resorted to outright profanity). Not that Al shows any signs of slowing down, either: He is currently working on a new album -- five of the tracks having already been previewed on last year's digital EP Internet Leaks -- and I am most certainly looking forward to whatever he does next.
Read more
5 people found this helpful
Helpful
Report abuse

Matthew Hansen
5.0 out of 5 stars A Trip Down Memory Lane
Reviewed in the United States on August 26, 2017
Verified Purchase
I have always loved Weird Al's music ever since I was a kid (a cousin introduced me to his music) and revisiting his music recently not only gave me something to remember, but to also appreciate even more. Thanks!
Read more
One person found this helpful
Helpful
Report abuse
See all reviews

Blew1
4.0 out of 5 stars A comprehensive, fun collection of the Weird one's best parodies and some original songs to boot!
Reviewed in the United Kingdom on November 24, 2016
Verified Purchase
This collection covers Weird Al's entire discography up to its release. 20 songs on the superior CD1 and 18 on CD2, make for a great value and largely varied package. There's everything here musically and thematically! Michael Jackson's 'Beat It' and 'Bad' turns into 'Eat It' and 'Fat,' Rage Against The Machine's best songs are morphed into a medley chronicling an overly enthusiastic, personal injury claimants list of transgressions and on the other side of the spectrum, Backstreet Boys' 'I Want It That Way' - 'eBay.' As for the originals, I physically cannot play 'Dare To Be Stupid' just the once, 'UHF' is also pretty close.
Disc 2 has two extended songs that really overstay their welcome, especially the monotonous 'Trapped In The Drive Thru.'
The music is flawless and perfectly captures the sound and vibe of the many artists parodied / paid tribute to, Weird Al's band deserves a lot of credit for this aspect and Al's Bob Dylan impression is as spot on as it is belly achingly hilarious. The production is also perfect, although some of the older songs are little lower down volume wise.
I dare to be stupid and say you could easily forego every Weird Al album for this collection, as it's so comprehensive and you can only stomach so much parody music before you yearn for the real thing.
Read more
Report abuse

Brawny Withed
5.0 out of 5 stars Weird Al: THE Essential Collection
Reviewed in the United Kingdom on November 25, 2011
Verified Purchase
A great introduction to the music career of Weird Al. Spread over two discs you get some of his greatest hit's from 1981's Another rides the Bus to 2006's White and Nerdy.

I can't recommend this album enough as the music is hilarious and smart and very catchy and in addition the CD is excellent value for money. There are some notable exceptions missing from the album such as Pretty fly for a Rabbi but obviously these can be purchased on his other albums which have merit in themselves.
Read more
3 people found this helpful
Report abuse

Richard Morgan
5.0 out of 5 stars Mandatory Fun
Reviewed in the United Kingdom on May 10, 2021
Verified Purchase
The CD came in time and in good condition. It's a very good bargain with a ton of clever, funny songs. Many of them unknown to me, including Weird Al's own compositions. American-centric, but extremely enjoyable.
Read more
Report abuse

Michael
5.0 out of 5 stars 5*
Reviewed in the United Kingdom on September 12, 2011
Verified Purchase
This compilation album brings the talent of 'Weird Al' Yankovic into a single place where the fabulous range of songs he has recorded over several albums can be listened to without hassle, and in one place. There are in my own opinion a few songs that have been missed; germs and pretty fly (for a rabbi) are two obvious omissions (though they can be bought on ' Running With Scissors '), but this is still a 5 star collection I feel is worth having.
Read more
2 people found this helpful
Report abuse
See all reviews