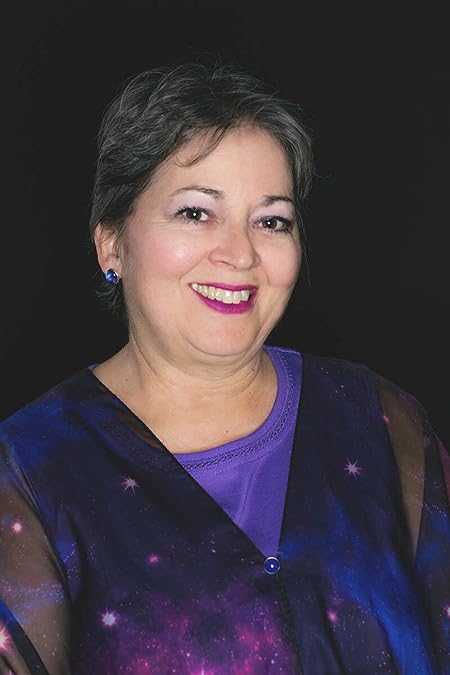 Ester is a writer and publisher and lives in the Smoky Mountains, where she has been writing sci-fi and paranormal/inspirational adventure romances for almost 30 years. Her first children's book, "The Adventures of Charlie and Ellie" was released in 2020. You can find her on her website: www.esterlopez.com or on Facebook at www.facebook.com/EsterLopezAuthor
Read more 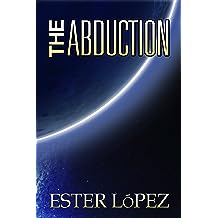 The Abduction: Book One in The Vaedra Chronicles Series Apr 29, 2016
by Ester Lopez
( 13 )
$4.99
Adam Davis, born and raised in east Tennessee, just had a strange premonition that turns into a nightmare. He's a resourceful loner that is mistaken for a criminal and abducted by aliens. He thought that was bad enough until he discovers the criminal he was mistaken for is his alien father.

Dram, a slave-trader and a businessman, has had too many close calls with the law and thinks of making a career change, turning over his business to his son and starting a new life as a free man in another universe. When his ship is struck by lightning, he loses his long-time business partner, while trying to outrun a bounty hunter. Can things get any worse?

Genesis, a princess from Atria, working as a bounty hunter for the Interplanetary Space Patrol, has hunted Dram for the past ten years for abducting all the women of her village, and recently, her own father. When she finally captures Dram, she realizes she had the wrong man.

But Dram seizes the opportunity and abducts both Adam and Genesis and takes them to his base on Meta. He quickly sends Genesis off with a ship full of slaves and begins training Adam to take over his business. Little does Dram know that Adam and Genesis made their own deal and both of them work on their own plans to escape.

Will Dram be able to pull off his plan to use Adam to take the fall for his lifetime of crime?
Will Adam be able to escape Dram's base, rescue Genesis, and keep his promise to help her find her father?
Will Genesis keep her promise and return Adam to Earth? And if she does, can Adam let her go?
Read more
Other Formats: Paperback 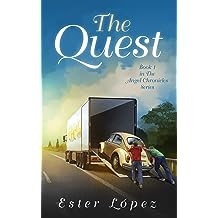 The Quest: Book One in The Angel Chronicles Series Nov 12, 2019
by ESTER LÓPEZ
( 3 )
$0.99
A recent graduate learns his father is about to lose his house to foreclosure. He returns home and learns his father lost his job after an accident caused a lengthy absence from work. His father invested money with a friend years ago and believes he has a way out of his financial problems, and sends his son on a quest to find his friend and retrieve his fortune.
On the road, Toby Flint has second thoughts and thinks his interview for a teaching job is the best solution to help his parents. His car breaks down and he is stranded when a truck driver named Raphael pulls over and offers to help.
The truck driver is heading to California where Toby needs to go. As the two head out, they make a couple stops and Toby realizes how great his father has been to him over the years and has a change in attitude.
When they stop at a diner, in the middle of no where, Toby realizes he has met Sara before and the two re-kindle their friendship. Raphael leaves Toby to finish a run and promises to return. Toby proposes to Sara and her parents plan a fast wedding. Toby learns that Sara has been cursed and has lost several husbands in the past because of it, and hesitates.
Can Toby remember what Raphael told him and break the curse?
Will Toby survive the wedding night and wake up a happily married man?
Read more
Other Formats: Paperback 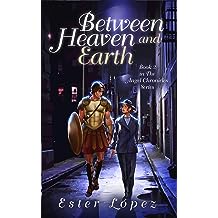 Between Heaven and Earth: Book Two in The Angel Chronicles Series Nov 12, 2019
by ESTER LÓPEZ
( 4 )
$2.99
Mike has been Maria Rojas' Guardian Angel for twenty-two years. The day he rescues her from two criminals, he discovers his human past. Fighting evil spirits and keeping Maria safe are no longer his only priorities. Now, he must find out who is trying to kill her and how he died, while fighting temptations of the flesh, forcing him to choose Between Heaven and Earth.
Maria Rojas, a nursing school student drops out of college the day she buries her mother. Being locked out of her apartment forces her to live on the streets of Pensacola. But the streets become dangerous after she witnesses a murder and realizes someone is trying to kill her as well. Her only hope is her Guardian Angel.
Can she help him find closure to his human past and discover how he died?
Will he be able to protect her from the evil that wants her dead?
Read more
Other Formats: Paperback 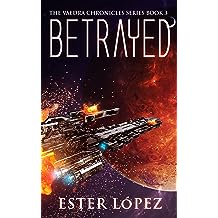 Betrayed: The Vaedra Chronicles Series Book 3 Mar 25, 2019
by ESTER LÓPEZ
( 3 )
$2.99
When a Secret Service Agent has second thoughts about her career choice, she decides to confide in her parents. Instead of making a decision, she learns her parents have seen a UFO and think they may have been abducted. Now, with more doubts than before, her boss insists that she give 100% to her job and her boyfriend leaves town and presses her to wear his ring.
When a UFO lands on the White House lawn, Keely McGuire is forced into teaming up with an alien lieutenant and an alien telepathic healer to help them find their missing landing party.
The three of them search for the missing team, but find their ship instead. With the healer's telepathic powers, they locate her mate, who happens to be an American. With two space ships, Keely and Tremol follow Genesis into the Pacific Ocean and locate Adam and the landing party in an underwater base.
Keely and Tremol face a conniving General who plans to keep the UFO a secret. Can she convince the General that the Admiral of the Concordance is ready to destroy the Earth if the landing party isn't returned safely?
Can Keely and Tremol bring the landing party back in time?
Will Keely's boyfriend's betrayal be the end of her career?
Read more
Other Formats: Paperback 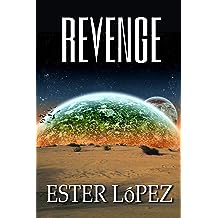 Revenge: Book Two in The Vaedra Chronicles Series Jul 8, 2017
by Ester Lopez
( 3 )
$4.99
After being orphaned at a young age, Berto raises his baby sister and manages to survive with a hidden power and stealing food. As a teen, he finds a job to support them both, but his little sister is raped by three teenaged boys. In a rage, Berto discovers his telekinetic powers are stronger than he realized and he kills one boy, injures another (who later dies) and the third runs away in fear. He seeks out a healer for his sister and the two are inseparable after that, until an acquaintance talks him into stealing a cargo ship when he's in his early twenties. He is blackmailed into working for the criminal, Dram.
When he has a chance to turn his life around, he realizes his past has come back to haunt him as he starts a new position working for the Interplanetary Space Patrol, helping them locate all the people Dram was responsible for abducting into slavery, and returning them to their home planets. But people are seeking revenge against him by sabotaging the Meta Base Station.
When Shey, a former slave, re-enters his life, the attraction between them grows. In a moment of passion, she reveals she wants revenge for her brother's murder.
Will she discover who the murderer is? Will she be able to forgive Berto for his past?
Will Berto be able to forgive himself? And can he stop the Persian attack and free the slaves with his telekinetic powers, or will he die trying?
Read more
Other Formats: Paperback 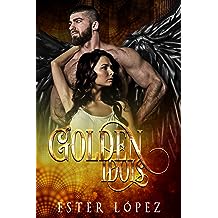 Golden Idols: Book 3 of The Angel Chronicles Mar 28, 2021
by Ester Lopez
( 2 )
$4.99
A detective and her angel partner search for a killer. Can they find him before he kills again, or will they die trying?
Read more
Other Formats: Paperback 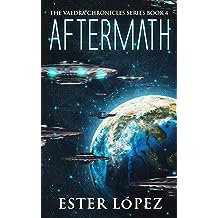 Aftermath: The Vaedra Chronicles Series Book 4 Nov 29, 2020
by Ester Lopez
( 3 )
$4.99
American astronaut, Torin Conolly, sneaks on board a ship bound for the Vaedra System. He tells his captors he's there to learn to fly their ships so he can teach others back on Earth. Instead of remaining in the brig, his captors offer to teach him what he wants to know. Will he come clean and confess his real reason for being there? Captain Gadara ni Hovsep is a flight instructor aboard the Concordance, bound for Vestra Major in the Vaedra System. She has six days left before finishing her last class so she can transfer to the Special Missions Team, until the Admiral charges her with the task of teaching this astronaut how to fly their ships. But she must also learn why he is really on board the Concordance. Will she be able to accomplish her tasks and transfer in time to the Special Missions Team? Claud Porter, an NSA employee, has a few secrets up his sleeve. He knows something about Conolly but won't reveal it. Will he finally cooperate and give up the information?
Read more
Other Formats: Paperback 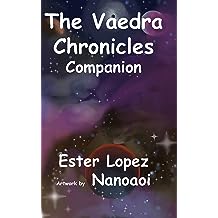