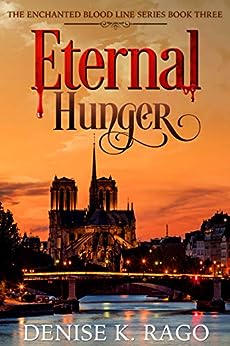 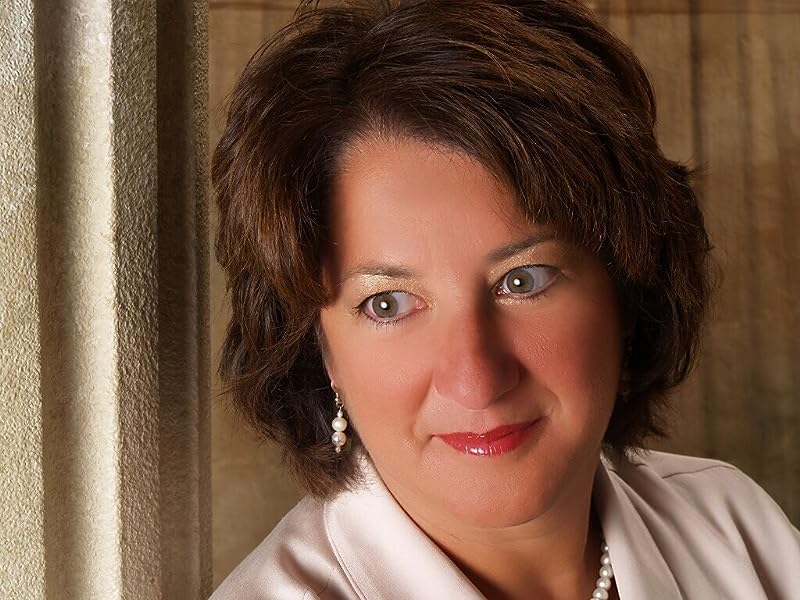 by Denise Rago (Author) Format: Kindle Edition
Book 3 of 3: The Enchanted Bloodline Series
See all formats and editions
Sorry, there was a problem loading this page. Try again.
How far would you run to protect your child? To what lengths would you lie to save them?

Eternal Hunger is the riveting third book in the Enchanted Bloodline series. Amanda and her vampire lover Michel Baptiste flee the California coast despite knowing the ancient order of vampires awaits them in France. While searching the Catacombs for clues to Christian’s whereabouts, Michel meets Victor, a supernatural being who will change the course of all of their lives. Secrets and betrayals drive this dramatic and gripping love story, as Amanda falls under the spell of Victor while conflicted over her loyalty to both Christian and Michel. While Christian’s life takes a drastic turn, Amanda and Victor scheme to save her young son Julien and Michel from a terrible fate.

Equal parts historical romance, paranormal fiction and thriller, this many-layered mystery pulls back the curtain on the ties that have bound a coterie of eighteenth century French vampires to their mortal lovers for more than three centuries.

It’s been a while since I had read a paranormal romance with a story that could capture my attention as this one did. Every so often you get an author’s great touch or spin on the vampires they create. ~ Paranormal Romance Guild

The author has a passion for art and the French Revolution and her descriptive passages about France and its museums are nice to read about. I like that the plot has many layers that are revealed bit by bit and the writing is dramatic. ~Book worm Reviews

This is series is a great one and I could definitely see it being made into a television show. ~ 4 stars ~ Danielle’s Domain

There is plenty of drama and mystery here as the chapters alternate from the 1700’s to the present and then back to the past again. ~ 3.5 stars Book worm Reviews

The author weaves a complex web of a story line with a full ensemble cast of really deeply defined characters. ~ Danielle’s Domain ~ 4 stars

Audible Holiday Deal
Join Audible Premium Plus for 60% off. Only $5.95 a month for the first 3 months. Get this deal
Books In This Series (3 Books)
Complete Series
The Enchanted Bloodline Series
Kindle Edition
Page 1 of 1Start OverPage 1 of 1
Previous page
Next page

When readers ask, where my ideas come from I explain that I don't write as much as I seem to channel the characters and their plight.  Although I enjoy writing and publishing books I also work in the world of Special Education in the business office of a small private school in my home state of New Jersey.  I have been there for most of my adult life. My love of Art and Art Museums, History, the paranormal and the French Revolution come together in all of my novels.

Nothing will stop Amanda Perretti from protecting her son.
She hides away with him, protected by her lover, the vampire Michel Baptiste, as they both await the return of vampire Christian Du Maure, once Amanda's lover and Michel's best friend, now a fugitive somewhere in Europe.
Convinced Christian is being held prisoner and in desperate need of her help, Amanda works to hatch a scheme that will get her and Michel to France to find Christian, and still keep her beloved son safe.  But they are not the only ones who seek Christian. There are some among the vampire order who believe that his rightful place is as the king of the vampires, with a strong queen beside him, and who will use any means necessary to entrap him into a heritage he has fought against for centuries.
Though Michel and Christian both carry secrets that could destroy both their friendship and their relationship with Amanda, they are only the first of many who harbor knowledge that could either see the vampire order rise to power once more in the mortal world, or destroy it completely.

If there are three things author Denise K. Rago is passionate about, they are vampires, Paris, and the French Revolution. She gets to combine all three in her latest novel. The author holds a Master's Degree in Museum Professions and lives with her family in New Jersey.
Read more

3.3 out of 5 stars
3.3 out of 5
4 global ratings
How are ratings calculated?
To calculate the overall star rating and percentage breakdown by star, we don’t use a simple average. Instead, our system considers things like how recent a review is and if the reviewer bought the item on Amazon. It also analyzes reviews to verify trustworthiness.
Top reviews

Eileen Bracale
4.0 out of 5 stars Every vampire has a story...
Reviewed in the United States on October 25, 2018
Verified Purchase
This book, the third in the series, is written with a different plot structure - it unfolds as each character's viewpoint... And it leaves the reader with a new set of open questions. I can't wait to see what's next for those vampires and humans who remain....
Read more
Helpful
Report abuse

Nai
4.0 out of 5 stars "Doesn’t love change you beyond recognition, leave you with a longing never to be truly fulfilled?"
Reviewed in the United States on January 21, 2019
Eternal Hunger is book 3 in Denise K Rago’s vampire series. I have read both Immortal Obsession and Blood Tears.
This third book in the series continues the story of Christian Du Mauré, Michel Baptiste and Amanda Perretti. These three have been in a love triangle as Amanda is mortal but the descendant of a powerful vampire Josette Delacore. Amanda’s blood is irresistible to immortals.

This book starts off where the last one left off, with a pregnant Amanda and Michel leaving NYC and now living in Venice Beach, not knowing if Christian is still alive but hoping he will come to them.

Josette is wicked, Christian has always loved her, Michel loves her as well and these three have been involved for centuries but Josette wants to kill Amanda. There is plenty of drama and mystery here as the chapters alternate from 1700’s past to present then back to the past again. Secrets are also revealed. I found I wasn’t too keen on the changes in the time line only because it would be for example 2010 then 2014 then back to 2010. The story is alternately narrated by a few of the characters, Josette, Christian, Michel, Amanda and even her son Julien. As I mentioned this is book 3 in this series and although the past is explained throughout I feel you should still read the first two books before jumping in.

What I enjoy about these books is that author Denise K Rago has a passion for art and the French Revolution and her descriptive passages about France and its museums are nice to read about. Versailles is on my bucket list. Amanda’s character worked at the Met in the previous installments which is a favorite places in NYC. It is nice to see art and history woven into the storyline.
I also like that the plot has many layers that are revealed bit by bit and the writing is dramatic.

The first book in this series remains the best one in my opinion. I felt like with this one there was a little but too much of explaining of past events. We don’t get to see Julien’s birth, which I wanted to, instead it is referred back to later. At one point Julien finds out something that happened to Christian from someone else, I’d rather have been reading that from Christian’s POV as it happened to him. I’d rather see it all unfold, not be told about it in hindsight. Much of the book is also about these vampires bloodlines and the order of things and who fathered who etc.

I find the love triangle between Amanda, Christian and Michel to be interesting. It changes and evolves. This is not your usual love story here.

There are twists and turns and surprises throughout and this third installment leaves it wide open for the next one. I met author and fellow Jersey girl Denise K. Rago online several years ago through book blogging and it has been really nice reading her books through the years. If you enjoy paranormal sagas with dramatic vampires and a dash of art history you might enjoy these.
Read more
Helpful
Report abuse

Karen
2.0 out of 5 stars Not nearly as good as the other 2
Reviewed in the United States on December 2, 2018
As hard as I tried, I could not get into this. It was an adequate vampire story; I found this story line to be quite mundane. I enjoyed the other 2 books in this series much more.
Read more
Helpful
Report abuse
See all reviews