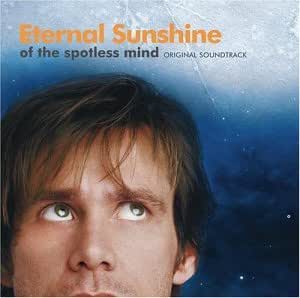 Eternal Sunshine of the Spotless Mind

Score by Jon Brion to the masterful 2004 film! Also features Beck ; The Polyphonic Spree ; ELO ; The Willowz and others.

With his soundtrack for Eternal Sunshine of the Spotless Mind, Jon Brion has carefully crafted music every bit as quirky (and fascinating) as the movie itself. As he did with Magnolia and Punch Drunk Love, Brion has made a varied score filled with odd instrumentation, infectious melodies, and at least one or two near-perfect pop songs. Best of all, these offbeat tracks compliment the movie incredibly well, and stand on their own as great listening. Mood-wise, this soundtrack is all over the map: "Row" is a simple, haunting piano solo; the movie's opening theme sounds like the austere and melancholic notes of an antique music box; while the strings on "Drive In" are playful and inquisitive. Even the non-instrumental tracks are gems: Beck's "Everybody's Gotta Learn Sometime" and Brion's "Strings That Tie You" rank among these artists' best songs. A handful of well-chosen tracks from E.L.O., the Polyphonic Spree, and the Willowz rounds out this thought provoking disc. A gem. --Jason Verlinde

canticles
5.0 out of 5 stars The Way It Should Be
Reviewed in the United States on May 11, 2005
Verified Purchase
I understand the criticism about how the pieces on this soundtrack sound underdeveloped. After all, we have tracks here that last only seconds long--"Postcard" is only twenty-two seconds long. It is difficult to listen to individual tracks alone and feel satisfied, unless you listen to the few swing and rock numbers interspersed throughout. But if you listen to the way this soundtrack is arranged in its entirety, you have to at least ask if the producer of the soundtrack didn't arrange so intentionally.

Some of these pieces enter abruptly, without a gradual introduction or fading in, such as "Phone Call." And some of these pieces, such as "Row," exit abruptly, as though you were in the middle of listening to it on your CD player and someone accidentally tripped over the cord and knocked the player out of commission. It doesn't take a genius to figure out that if the producers wanted to that they could have made smoother transitions between the tracks, by either sustaining the ending or fading in the beginning.

This soundtrack, as far as I can understand it, exists as a whole, and can be appreciated best if listened to as such. It complements the movie very well. The abruptness of the pieces, the seemingly fragmented ideas, the strange mixes of swing, rock, Indian, and jazz genres all reflect the flitting in and out of ideas that go through the head as we sometimes search to remember things. The ideas come in fragments, in different colors and sizes; we remember things from different times, putting them together in wrong order, etc.; much like how Joel Barish was doing in the movie when he was trying to save his memory. I wouldn't be as satisfied with this soundtrack if it were done in the traditional sense of putting together a fully developed suite.

Don't get me wrong. I'm not saying that I wouldn't be satisified if the pieces here were fully developed. Heck, I wouldn't have even thought of the idea of arranging the music the way it is here had this soundtrack existed in the traditional manner. But after having heard this arrangement, I would be less satisfied otherwise.

And, as though to clue us in on their intentions, the producers bring us the tracks in a different order than their occurences in the movie (just as how the movie moved along not in a timely order), including giving us songs that were not in the movie. There's a song here called "Strings that Tie to You," which occurs in the middle of the soundtrack. I don't ever remember it being played prominently in the movie. But here, it is a key song, because its lyrics are the most relevant of all to the movie. The lyrics describe exactly how one would feel before going through with the erasing procedure described by the movie. The ending number on this soundtrack is "Elephant Parade." "Elephant Parade" lasts twenty-six seconds, and in the actual movie, it doesn't come even close to being near the end. But here, they put it last . . . because the tune it plays echoes the song "Strings that Tie to You." It takes you right back into the middle of the arrangement of this soundtrack. It echoes as memories do. It echoes in a manner reconstructed; not quite accurately. The last note is even withheld, to give us a sense of incompletion. But it echoes nonetheless. I don't think anyone can doubt that the placement of at least those two tracks is intentional. "Elephant Parade" may sound like a short, incomplete fragment. It may not be the most satisfying possible track to end the soundtrack. But placed at the end the way it is, I wouldn't have it any other way.

Benjamin Lukoff
VINE VOICE
4.0 out of 5 stars Perfectly captures the mood of the film--brilliant
Reviewed in the United States on June 7, 2004
Verified Purchase
As I wrote in my review of the movie, Jon Brion's score brilliantly accentuates the scenes in "Eternal Sunshine" without threatening to overshadow them. This is my first introduction to his music, and I'm quite impressed. But beyond that, it is able to stand on its own, as it does on this CD, without moving pictures as its backdrop. How often does that happen?
Favorite tracks include "Theme," "Peer Pressure," "Elephant Parade," "Strings That Tie to You," and "Everybody's Gotta Learn Sometimes." One star off, though, for the inclusion of the Willowz, which, as others have pointed out, breaks the mood Brion carefully sets up. Five stars otherwise--four, as it is.
Read more
13 people found this helpful
Helpful
Comment Report abuse

Cecily
5.0 out of 5 stars One of the best soundtracks ever!
Reviewed in the United States on December 6, 2007
Verified Purchase
Unlike many soundtracks, which are uneven and derivative, the choices made on this one are innovative and well-thought-out. Even an oldie like ELO's "Mister Blue Sky" sounds exhilaratingly fresh as it builds to its electronically heavenly conclusion, as it is woven into the fabric of the entire CD's mood: sunshine, mind journey, loss, love and exploration of the soul. Quirky like the movie, but it all works, in my opinion. Highly recommend.
Read more
One person found this helpful
Helpful
Comment Report abuse

Alex
5.0 out of 5 stars Unsettling when it needs to be, but still touching
Reviewed in the United States on March 20, 2013
Verified Purchase
Eternal Sunshine is one of the strangest movies I've seen, but it's also one of the best. The soundtrack has a lot of original music, but a lot are shorter songs, given the pace of the movie. Beck has a few songs, which just seem to belong in here too. I just wish Elephant Parade was longer, since it's the best track. At least listen to that one.
Read more
Helpful
Comment Report abuse

52 Girl
5.0 out of 5 stars Best Soundtrack
Reviewed in the United States on October 15, 2004
Verified Purchase
I really think this is the best soundtrack of the year, comparible to the one Phillip Glass composed for The Hours - only a completely different sensibility. It successfully combines a grand score of dramatic sweet love songs with whimsical, theatrical flights of fancy-type tunes. Jon Brion composed a beautiful and unforgettable arrangement of songs that are enjoyable to listen to...this from someone who does not like to listen to movie soundtracks very often (Garden State was another contender). This soundtrack was fitted perfectly for the best movie of the year about a quirky yet meaningful trip through the subconscious minds of those enthralled in complicated relationships. Also, it's a lot of fun to listen to. Beck's cameo in Everybody's Gotta Learn Sometimes is worth buying alone, not to mention The Electric Light Orchstra's performance of Mr. Blue Sky and all the lovely score in between. My hope is that along with the movie sweeping the Oscars, this will win a grammy and an oscar. That's my two cents.
Read more
4 people found this helpful
Helpful
Comment Report abuse

Suzanne Robertson
5.0 out of 5 stars Musical Effervescence for a Visually Effervescent Film
Reviewed in the United States on May 13, 2004
Verified Purchase
Eternal Sunshine of the Spotless Mind is a film in a catagory by itself, and same goes for the soundtrack. The soundtrack is really a score (literally) to a brilliantly visual film. This record takes you on a musical journey, just like the euphoric visual effervesence of the film itself. If you liked the film, please as a favor to yourself buy the soundtrack.
Read more
One person found this helpful
Helpful
Comment Report abuse

Art Hansen
5.0 out of 5 stars Have we met before?
Reviewed in the United States on July 19, 2015
Verified Purchase
One of those rare movies that really draws me in. I can watch it over and over.
Read more
Helpful
Comment Report abuse

Juanita M. Martinez
5.0 out of 5 stars a great compilation
Reviewed in the United States on August 25, 2009
Verified Purchase
although i loved the movie, this CD is a jewel in its own right. tons of music, great listening.
Read more
Helpful
Comment Report abuse
See all reviews

Amazon Customer
5.0 out of 5 stars Five Stars
Reviewed in the United Kingdom on November 17, 2015
Verified Purchase
Bargain and such a beautiful album
Read more
Report abuse

Olivier
4.0 out of 5 stars Good soundtrack
Reviewed in Canada on September 18, 2020
Verified Purchase
The soundtrack gives the mood of the movie, especially the song of Hansen Beck "Everybody's Gotta Learn Sometimes". However, music sample from Jon Brion are too short.
Read more
Report abuse