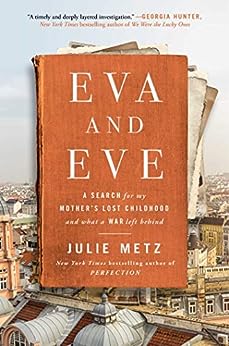 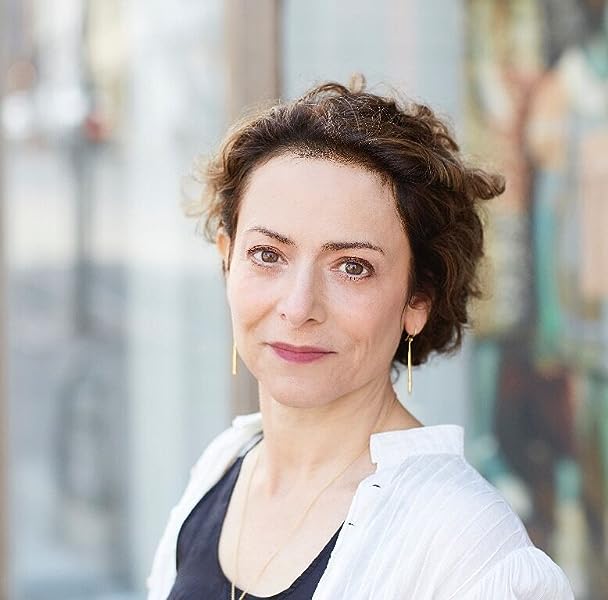 Eva and Eve: A Search for My Mother's Lost Childhood and What a War Left Behind Kindle Edition

Julie Metz is the New York Times bestselling author of Perfection. She has written for publications including The New York Times, Salon, Dame, Redbook, and Glamour. She has received fellowships at Yaddo, the MacDowell Colony, the Virginia Center for the Creative Arts, and The Vermont Studio Center. She lives with her family and two cats in the Hudson Valley. You can find out more about Julie’s writing life on Instagram: @JulieMetzWriter and her website: JulieMetz.com

Julie F. Maloney
5.0 out of 5 stars "Eva and Eve" -- Stunning and Unforgettable
Reviewed in the United States on April 28, 2021
Verified Purchase
I cannot stop thinking about this memoir by Julie Metz. Stunningly written with meticulous research, Metz weaves her personal story within the greater story of her mother's and grandparents' escape from Nazi-infested Vienna. The journey - so hazardous and terrifying it will take your breath away - describes obstacles as well as small triumphs in the most exquisite language. Metz is a writer of worth. She has poured herself into this personal story so we cannot look away. As I read, I kept bookmarking pages so I could return to the story. The tagline: "A Search for my Mother's Lost Childhood and what a War left behind" foreshadows the theme of the trauma of war and how it passes from generation to generation. Metz's memoir informs us on the cultural life of Vienna, the resilience of the human spirit and the reminder of how we must learn lessons from history. "Eva and Eve" is the highest example of what a book should do -- inform, captivate, and stay with us.
Read more
Helpful
Report abuse

K.K. Press
5.0 out of 5 stars excellent follow-up to "Perfection"
Reviewed in the United States on April 12, 2021
Verified Purchase
As a fan of Julie Metz’s first book, “Perfection,” I was keen to read her new book, and was thrilled to discover that, once again, she has used a personal memoir as a springboard to take the reader on a voyage of discovery. It includes an engrossing detective story, breathtaking descriptions of Vienna and Trieste, and a meditation on history, character, motherhood, immigration, and where we find ourselves in the present political climate and pandemic. She’s one of those writers whose eyes you want to see through, and whose company you want to keep. Both fiercely frank and comforting, it makes the personal universal and meaningful.
Read more
Helpful
Report abuse

J.K
TOP 1000 REVIEWER
3.0 out of 5 stars Interesting
Reviewed in the United States on April 18, 2021
Metz traces the story of her mother's family fleeing Vienna in 1940. She was not particularly close to her mother so a chunk of her story had to be researched after her mother's death. I liked reading about the research and her travels to investigate. They escaped in March 1940, very late and were fortunate to escape. The one drawback to the book is the author had a tendancy to inject her opinions as fact pertaining to current events. Thanks to NetGalley and the publisher for the early read.
Read more
2 people found this helpful
Helpful
Report abuse

Julie Metz, the author of “Eva and Eve” has written a heartfelt, emotional, and poignant memoir. Julie Metz writes about the present when she finds a diary filled with good-bye notes from friends and relatives to her mother, after her mother’s death. Julie has always questioned her relationship with her mother, but now the author becomes obsessed with what happened during her mother’s childhood, and how devastating and tragic war can be. The author is determined to find out what happened in the past.

The author’s mother seemed to enjoy and assimilate into New York’s cultural and artistic population, and enjoyed the best restaurants and stores. Her mother Eve, was known as Eva as a 12 year old girl, coming of age in Vienna, during the time when there was the Nazi occupation. Eva’s family was Jewish, and there was rising anti-semitism. It was a dangerous and deadly time.

Julie Metz does trace several generations of her family. Her family’s printing press was significant and important to Germany. Also discussed is that there were good people that did make a difference, just as there were evil people that caused destruction.

The author mentions immigration at that time and compares it to problems in the present. I would recommend this informative and intriguing memoir to other readers.

Anne Baird
4.0 out of 5 stars A Great Tribute!
Reviewed in the United States on April 6, 2021
Julie Metz writes a beautiful memoir about her mother’s life. It isn’t until her mother passes away from Cancer that she discovers the truths of her mother’s past of escaping Vienna Austria during the Nazis occupation and immigrating to New York. As this authors so eloquently puts it she knew Eve, her mother as an adult, while her mother was called Eva as a child, a person her mother kept hidden due to her horrific experiences as a Jew in Austria. This author takes the reader on her research journey to uncover the truths of her mother’s family’s past.
Read more
One person found this helpful
Helpful
Report abuse

She Just Loves Books
4.0 out of 5 stars A beautiful memoir!!
Reviewed in the United States on May 5, 2021
Julie Metz has written an absolutely stunning memoir that takes her family’s story and brings you into each heart-racing moment!

This story brings Julie’s personal impact from the War and her family’s harrowing experiences together. I really appreciated the opportunity to see how the war continued to change people’s lives long after it ended. Julie’s story opened my eyes and broke my heart a bit (she puts it back together though)!

Metz writes of Vienna and Trieste with beautiful descriptions that really took me there. She finds just the right words to paint pictures for me! Her story brings so many topics to the surface for the reader to consider. It’s truly an amazing story, and one that I highly recommend.

I was provided a gifted copy of this book for free. I am leaving my review voluntarily.

Tarheels
4.0 out of 5 stars A powerful memoir
Reviewed in the United States on April 6, 2021
Eva and Eve is a powerful memoir based on the author’s mother’s childhood in Nazi-occupied Austria. It may be nonfiction because it actually happened, but it reads like the most engaging and compelling fiction.

Julie Metz doesn't learn of her mother’s challenging upbringing in Austria until after she passes away when she finds a book filled with notes from friends and family addressed to Eva. From there, Julie traces her mom’s family’s history back to Austria where she finds a story of survival.

This is a beautiful book, a glorious tribute to Julie’s mom and her family, and a powerful story that left its mark on me. My heart aches for Eva throughout her life, becoming a mom, and never sharing about her harrowing start in life.

I received a gifted copy.


Read more
Helpful
Report abuse
See all reviews
Back to top
Get to Know Us
Make Money with Us
Amazon Payment Products
Let Us Help You
EnglishChoose a language for shopping. United StatesChoose a country/region for shopping.
© 1996-2021, Amazon.com, Inc. or its affiliates