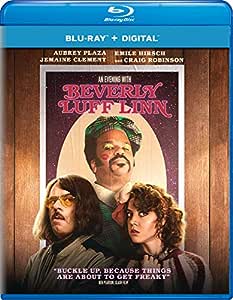 After getting fired by her scheming husband Shane Danger from his cappuccino shop, dissatisfied Lulu Danger (Aubrey Plaza) is stunned when a TV commercial for "An Evening With Beverly Luff Linn For One Magical Night Only" reveals a mysterious man from her past (Craig Robinson). When Shane and his bumbling cohorts steal the cashbox from Lulu's adopted vegan brother Adjay, specialist Colin (Jemaine Clement) enters the fray to retrieve the stolen funds. But Lulu seizes the opportunity to run off in search of her mystery man—and events only become stranger from there. This is a story of love, theft, athletic swimming, and a magical magical event.

3.5 out of 5 stars
3.5 out of 5
175 customer ratings
How does Amazon calculate star ratings?
Amazon calculates a product’s star ratings based on a machine learned model instead of a raw data average. The model takes into account factors including the age of a rating, whether the ratings are from verified purchasers, and factors that establish reviewer trustworthiness.
Top reviews

walletboyniac
4.0 out of 5 stars Napoleon Dynamite meets David Lynch is accurate
Reviewed in the United States on May 30, 2019
Verified Purchase
Pair the offbeat tone of Napoleon Dynamite with the sinister music of David Lynch and you've got this. It was quite hilarious. Of course Jemaine Clement rules in whatever he's in. The only thing I didn't like were all the love stories at the end of the movie. It's predictable territory for such a quirky movie. But the "Evening" itself I did not expect. I was fully anticipating Beverly to sing that Crash Test Dummies song.

Update 6/10/19: I revisited this after seeing Jim Hosking's other movie, The Greasy Strangler. I thought Strangler was superior. They are actually two different movies, with a similar tone. I did think Beverly Luff Linn was awesome, but was still thrown by the traditional love story at the end. Then they dance? I mean, that's just tacked on. This one was done for a major studio (Universal), which really makes me wonder if someone with money had their say.

K. Mc.
5.0 out of 5 stars Unique. Hilarious
Reviewed in the United States on December 1, 2018
Verified Purchase
It may help to have a few drinks in you, but this is one of the dunbiest AND most original things I've seen in a long, long time.

Completely worth a rental. I wish more comedies like this were made.

Forest Nymph
5.0 out of 5 stars Humboldt County Represent!
Reviewed in the United States on May 17, 2020
Verified Purchase
The exterior, lobby and lounge of the hotel are all filmed at the historic landmark, the Eureka Inn, with a tacky disguise. In the jacuzzi bathtub scene with Beverly Luff Linn, the painting of the ghost cat from the Eagle House/ Inn at 2nd and C is in the reflection in the mirror. Other buildings are used that I don't necessarily recognize, they have tried to make it all look like it's all in the same hotel. But it's not. Also, neither of these hotels have ugly 1970s Howard Johnson looking rooms, they have elegant historical decor, so I'm guessing those are props in a closet or they literally went down the street to the Best Western to film those parts.

I'm giving this five stars just because this film is low key using the local aesthetic of everything I stan.

Plus April from Parks and Rec, you know?

APPLE
3.0 out of 5 stars Why Gawd Why
Reviewed in the United States on June 20, 2020
Verified Purchase
I watched this because I loved and was disgusted by the “Greasy Strangler”. This was a jumbled mess but not in a “so awful it’s good”— kind of way. The only woman is pretty one dimensional trope. She’s a lazy bored woman in an unfulfilling relationship with a loser. Of course she kidnaps a stranger after taking his gun and steals her vegan brother’s life savings. She pining for another jerk who abandoned her by faking his death. Her only objective is to bounce from one guy to another. The men are funny idiots that do gross or inappropriate things. Can’t the characters be more? The “Greasy Strangler” has pathos and a power struggle and slap stick. As gross as it was you related to the sadness of a son who hates his parent and the feeling of a inescapable situation. “An Evening with Beverly Luff Lin” is a waste of time the character have no goals or purpose.
Read more
Helpful
Comment Report abuse

Brian
3.0 out of 5 stars Interesting....
Reviewed in the United States on October 27, 2019
Verified Purchase
I gave this movie three stars not because I hate it but because I'm a bet perplexed by it all. I just really don't know how to explain my feelings about this film. I love awkward type films like this such as Napoleon Dynamite, Nacho Libre, Gentlemen Broncos, Eagle VS Shark, etc. but this one was one of a kind. There were lots of funny stuff in it and plenty of awkward stuff in it so if you like movies like this, then try it out for yourself.
Read more
One person found this helpful
Helpful
Comment Report abuse

GREGORY BOTELLO
5.0 out of 5 stars A movie you won't soon forget.
Reviewed in the United States on November 21, 2018
Verified Purchase
Funny on so many levels. Lots of great lines in there to remember. The actors are all amazing and great to see some of them in this fall. Recommend watching twice to get all the great nuances.
Read more
3 people found this helpful
Helpful
Comment Report abuse

R. A. Goodman
3.0 out of 5 stars Didn't live up to the trailer but still a fun ride
Reviewed in the United States on December 28, 2018
Verified Purchase
The best thing about An Evening with Beverly Luff Linn was the trailer. That was some funny stuff. Now the film was an entirely different thing - Not funny. But at least it was fun to look at - similar to Twin peaks. Jemaine Clement and Aubrey Plaza had chemistry though not enough to make the film as good as their work in Fx's Legion.
Read more
One person found this helpful
Helpful
Comment Report abuse

Brian Foster
1.0 out of 5 stars Turable, just turable! NEXT!!!
Reviewed in the United States on December 20, 2018
Verified Purchase
I can't believe all these great actors are in such a terrible movie. Don't waste your money, just hit yourself in the balls, it will feel better!
Read more
3 people found this helpful
Helpful
Comment Report abuse
See all reviews from the United States

A. M. Parmenter
1.0 out of 5 stars What did I just watch........!?
Reviewed in the United Kingdom on November 1, 2018
Verified Purchase
Well there’s 104 mins of my life I won’t get back......Total cobblers! With Matt Berry in it I expected a riotous of kilter comedy joy, all I got was a feeling of disappointment & bad wind!
Read more
4 people found this helpful
Helpful
Sending feedback...
Thank you for your feedback.
Sorry, we failed to record your vote. Please try again
Report abuse

LadyStardust
5.0 out of 5 stars Quirky, bizarre, hilarious
Reviewed in the United Kingdom on May 18, 2020
Verified Purchase
This won't be to everyone's tastes, but if you like weird, quirky, slightly bizarre humour and oddball characters, you'll love this. Hilarious!
Read more
Helpful
Sending feedback...
Thank you for your feedback.
Sorry, we failed to record your vote. Please try again
Report abuse

Paul
4.0 out of 5 stars Funny and quirky movie
Reviewed in the United Kingdom on April 28, 2019
Verified Purchase
From the Director of The Greasy Strangler - low budget comedy with a surprise ending. May not be to everyone's taste but we thought it was great
Read more
Helpful
Sending feedback...
Thank you for your feedback.
Sorry, we failed to record your vote. Please try again
Report abuse

Amazon Customer
4.0 out of 5 stars Unique
Reviewed in the United Kingdom on March 26, 2019
Verified Purchase
After the Greasy Strangler a much sweeter but no less strange experience, Deserves cult status and Aubrey Plaza is a delight.
Read more
Helpful
Sending feedback...
Thank you for your feedback.
Sorry, we failed to record your vote. Please try again
Report abuse

G.C.Fox
5.0 out of 5 stars Very funny
Reviewed in the United Kingdom on June 4, 2019
Verified Purchase
Highly inventive and great fun. Not as shocking as "The greasy strangler"
Read more
Helpful
Sending feedback...
Thank you for your feedback.
Sorry, we failed to record your vote. Please try again
Report abuse
Load more international reviews

Pietro
5.0 out of 5 stars Ottimo
Reviewed in Italy on May 4, 2020
Verified Purchase
Chiuso,nuovo
Read more