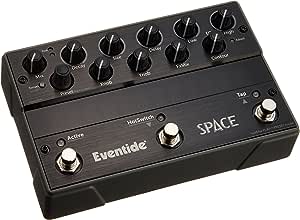 Darren Witwer
4.0 out of 5 stars Amazing sound, a bit confusing
Reviewed in the United States on July 7, 2020
Verified Purchase
The features, sound quality and variety of algorithms are very impressive. Stereo inputs and outputs were a top priority for my purchase. I have a Kemper Profiler, which contains probably the next best reverb engine out there, so I want to make some comparisons between the two approaches to digital reverb, and discuss the Strymon Big Sky, which is the only comparable reverb pedal. I consider myself very adept at using and assigning complex reverb programs and expression pedal with the Kemper. I bought the Eventide Space as a reverb for my live mixing board, and for recording (as a supplement to the Kemper). There is a depth and warmth in the Eventide that in my opinion is better than the Kemper, and definitely better than the Big Sky. However, even with the 11 parameter knobs and expression pedal, the Kemper has even more virtual knobs, and ALL of them can be connected to the expression pedal. Output level on the expression pedal is not an option on the Eventide, so if you find the swelling reverb gets louder than you want as you increase the expression pedal, you can't program the output to drop as mix increases. This was a minor weakness, given the amazing sound. My main issue with the device is that the H9 software is a bit buggy, and the way it saves and organizes the settings programs is still bewildering, so user friendliness is considerably behind the Kemper. The large display is really nice, and makes for a much better user experience than the Strymon. Expression pedal programming without the H9 software is also glitchy (even with latest firmware and H9 software).
So, after almost a month of using and programming it, here is my summary: would I buy it again, knowing what I know? Yes, and I am very glad I got it instead of the Strymon Big Sky. I can lose myself for hours in these sounds.
Who would like this over the Strymon? People not afraid to turn lots of knobs, and psychedelic music lovers. This is not a beginner's reverb unit. Also, if you want a range from traditional sounds to extreme ambient and noise textures, this is the pedal for you.
Is it better than the current (July 2020) reverb algorithms in the Kemper? That's debatable given the quality and sophistication of the Kemper algorithms now. But, I have to say that I think so, and find myself constantly adding it to my Kemper now. I really like the warm sounds. The expression pedal interface is inferior to the Kemper, but still a great tool.
Who won't like this pedal? Anyone who wants a simple, out-of-the-box, easy to use pedal. The Strymon is probably a better choice, but the Eventide Space just plain outperforms it.
The bigger question, in my opinion is: would you rather have the compact, more flexible and expensive H9 harmonizer without all the knobs, or this larger, knob monster for live tweaking? I chose the Space because I see this as an inexpensive alternative to a Lexicon rackmount studio reverb, and since I have and love the Kemper, I don't really see the virtually knobless H9 Harmonizer as a useful device for me.
Read more
2 people found this helpful
Helpful
Report abuse

islandsound
5.0 out of 5 stars Eventide Space will give you sounds you've never dreamed possible
Reviewed in the United States on October 1, 2015
Verified Purchase
I don't own too many effects pedals and or processors but I would have to say this is one that I will be keeping for the long haul. I found it on Amazon here used and it came in pretty much new condition. There's no reason to buy one of these things new if you don't have to. It's worth the wait to shop around and find a pristine used one like I did. The pedal is amazing and will keep your busy for days tripping out to the endless possibilities this thing can do. I have been using it for synth gear and it's great because I can adjust the settings while I am playing. I'd rather have multiple separate processes for what I am working on than an all in one unit. If you are looking to get some new sounds from your gear try this thing out, you won't be disappointed.
Read more
4 people found this helpful
Helpful
Report abuse

Internet Person
5.0 out of 5 stars It's a lot of Reverb
Reviewed in the United States on July 29, 2019
Verified Purchase
The Eventide is a secret sauce. It's like honey dripping into your ears. It works well with synths (there's a line switch for input and output). It's pricey, but I've no regrets.
Read more
One person found this helpful
Helpful
Report abuse

Matthew
5.0 out of 5 stars The best pedal for ambient landscapes
Reviewed in the United States on April 16, 2015
Verified Purchase
This is the best pedal purchase I have ever made. There are so many interesting settings that are all tweak able. I can't say enough good things about this pedal. One minor issue though: the first one I bought had a problem where some of the parameters would start changing while the pedal was idle so I returned it and got a new one that seems to be working fine. I contacted eventide support and they responded quickly with suggestions over email.
Read more
2 people found this helpful
Helpful
Report abuse

SHR
5.0 out of 5 stars Ordered one from Amazon, they sent wrong product
Reviewed in the United States on August 23, 2013
Verified Purchase
Beware, there seems to have been a mix up at Amazon. I ordered this pedal and instead they sent me some sort of eventide pitch shifter pedal. I read on another eventide pedal review of the same thing happening so Amazon must have mixed up stock placing SPACE pedals in a place that was meant for a different pedal. I sent it back, was refunded, so all is well. I then ordered this pedal elsewhere and received it A-OK. As for the Pedal, it is a 5 star pedal all the way. I have had the Hall Of Fame, Stereo WET and Hardwire Reverb. This literally kills them all. Lush, organic, and HUGE. No noise. It is a high quality effect and it shows. Using it with a Fender Princeton Reverb along with a Carbon Copy delay. Superb.
Read more
7 people found this helpful
Helpful
Report abuse
See all reviews
Pages with related products. See and discover other items: music studio software, guitar effects processor, guitar multi effects processor, reverb guitar pedal, reverb pedal guitar, reverb pedals
Back to top
Get to Know Us
Make Money with Us
Amazon Payment Products
Let Us Help You
EnglishChoose a language for shopping. United StatesChoose a country/region for shopping.
© 1996-2021, Amazon.com, Inc. or its affiliates