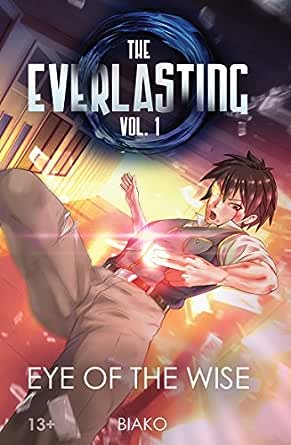 You've subscribed to The Everlasting! We will preorder your items within 24 hours of when they become available. When new books are released, we'll charge your default payment method for the lowest price available during the pre-order period.
Update your device or payment method, cancel individual pre-orders or your subscription at
Your Memberships & Subscriptions
There was an error. We were unable to process your subscription due to an error. Please refresh and try again. 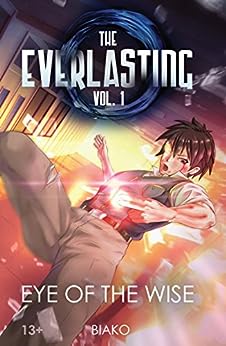 The Everlasting: Eye of the Wise: An Original English Light Novel Kindle Edition 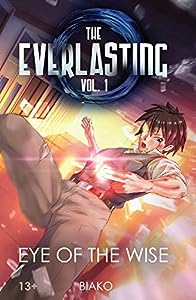 A review copy of this series has been rated 4.6 out of 5 from more than 50 reviews on Royal Road Legends. Here is what some reviewers had to say:

"This story is one of a kind. While there are many stories regarding magic, fantasy and academies, 'The Everlasting' is a unique work that will drag you into a world of creativity and imagination." - Strovist

"I love this epic story. I like how relatable the character is and how when he goes through hardships and betrayals he just pushes onwards. I highly recommend this novel it is one of the best that I have ever read." - Kingkid

"Awesome story with great potential to be one of my top favorite stories." - Cali

"Hidden gem! This story has a very deep plot ..." - Phantasoses

Tristan A. Hayes
VINE VOICE
5.0 out of 5 stars Crisp, Refreshing Read for a School Magic Series
Reviewed in the United States on May 14, 2018
Verified Purchase
The Everlasting is an interesting mix of magical fantasy with modern school life aspects. Our lead character, Asura, transfers into a magical high school on the eve before the schools massive battle ranking affair. An antagonist infiltrates on this day and chaos immediately ensues. The cover image is soon brought up and we're done. Overall this on the surface, while not being something that is innovating the medium or acting like a game changer, managed to satisfactorily hit ever checkbox for this type of series and do it in such a way that it becomes a gripping page turner.

I loved the breezily refreshing writing style of the author, as they waste no time bogging us down in details or needlessly spending time on dialogue that leads to nowhere. For many times it seems as if it was written in such a way that its almost no questions asked at times. I didnt have to find my way rereading action parts due to a lack of clarity or revisit facts due to messy descriptions. The crisp writing style also made all the dialogue feel like characters were immediately saying what was important and we wasted no time with filler commentary. Though I like some bantering from characters and also just some silly dialogue moments, the Everlasting makes a commendable effort to stay on track.

For anyone that is familiar with these type of stories, they'd be instantly familiar with this book and also with where it starts and ends up. I do find myself in love with these stories and actually loved this alot. The extended cast of the characters around Asura were fun. Shiki is the true bro, the best of the best, and I loved his company. I do hope get gets closer to Asura in the future (otp). Nassi was fun , and Kaori added an interesting dynamic to the cast. I'm glad we didnt have the tsundere type of character among this list (though perhaps Nassi is the male tsundere we didnt know we needed, but am glad we have).

The magic system was also cool.

Kindle Customer
2.0 out of 5 stars :(
Reviewed in the United States on May 3, 2017
Verified Purchase
Disappointing story.
Main character is supposed to be a super warrior but he is kind useless.
Magic system is so so
Read more
2 people found this helpful
Helpful
Comment Report abuse

JC
5.0 out of 5 stars what happen to vol. 2
Reviewed in the United States on October 7, 2020
Verified Purchase
why did you not complete the story. i hate it when you stop in the middle. i been hoping for you to pub. the next book.
Read more
Helpful
Comment Report abuse

Christian Johansen
2.0 out of 5 stars Bad
Reviewed in the United States on April 28, 2017
Verified Purchase
I did not like this book, primarily because the writing felt jolted and hurried. I didn't finish because of this.
Read more
2 people found this helpful
Helpful
Comment Report abuse

Supified
2.0 out of 5 stars Shallow and generic fantasy light novel
Reviewed in the United States on April 22, 2018
Light novels are becoming very common in the US, with the number of translated books growing by the day. For those unware, light novels are kind of similar to comics or anime in how simple the stories can be and easy to read and relate to. My own library of light novels has been growing by quite a bit, but that does not mean they are all excellent. As the number of available stories grow, the good has really started to separate from the bad, so with that in mind what did I think of Everlasting? I’ll try to avoid spoilers.

One of the major advertising points of this book is that it is an English Light novel. This might have been unusual and noteworthy before, but these days so many are getting translated that the options are huge and range from the excellent, like Tanya the Evil, I’m a spider So What, or Another to the terrible. This book follows the fantasy trope. Another famous example of this in the English translated light novel, is the smash hit, Is it Wrong to Pick up girls in a Dungeon. Given the massive popularity of the last example it is probably not fair to compare this book to that, but at the same time, kind of unavoidable. The fantasy setting in everlasting is an odd one. Magic exists and skills which the user must shout out the name to use, but the world doesn’t take into account notions like experience or levels, so they’re not trying to make the book fourth wall breaking; So what are they doing?

There isn’t a lot of depth to this book, nor any real world building. The setting is a fantasy, sort of, but it feels very modern and it is hard to tell if this is a pseudo modern fantasy setting or not. Actually it would have been quite neat if the book went that direction, but the book doesn’t really establish anything. The main character is extremely shallow and without apparent motivation or personality. The closest one I felt with any semblance of self was his best friend Shiki, well his only friend, but even then the depth of personality runs short. Did Shiki have friends before meeting the MC? Did the main? It is awfully hard to tell because the book doesn’t elaborate.

The anime tropes it uses are pretty tired too. Romance sells in books and just about every story will find a way to include some, but this book does so without the sort of background to make it actually pay off. There is no build up, it is just presented. There is the cliché walking into the wrong changing room and accidentally showing yourself to a girl and kisses that maybe the deliverer thinks is chaste but our MC does not feel the same way. These sorts of things never happen in real life and they’re just not that exciting anymore in a trashy book. Additionally romance is a pay-off, but it really does not work unless you develop the romantic interests or the main, none of which this book does before attempting to cash it in.

This is not to say the book does everything wrong. There are some concepts that might have been great, if executed better. For instance, the main character seems to be deliberately made as an everyman you can relate to. So you’re supposed to put yourself as the lead. This sort of thing isn’t new in literature, but where the book takes it is. The main is at a significant disadvantage to his peers, which is not the sort of thing you might expect in this sort of book. There is not the sense of real power from the main, rather he has a lot to overcome. This hook and payoff seems to be the biggest thing the first one has going for it, but that is scarcely enough to justify reading the book long enough to experience that pay-off.

Ultimately the overwhelming sense this book gives is shallowness. There isn’t any apparent guiding principal or moral, the characters are too empty to be related to and the romance plotline lacks any titillation. Light novels have gotten quite common and if you look on Amazon now, you could find endless already translated into English. Nothing really sets this one apart in the crowd so you’re probably better off looking elsewhere.
Read more
Helpful
Comment Report abuse

Though there wasn’t any illustrations throughout the novel, I didn’t notice until halfway through! Everything was explained nicely, and I was drawn in by the story. There wasn’t a time where Asura’s looks where explained or shown, though, which I would have liked to know. But the rest of the characters where talked about in detail and where a great addition to the protagonist.

Biako has done a great job with The Everlasting being his first light novel! Biako has told me that the story is grander than what’s apparent, and grows to cover worlds and much more!
Read more
Helpful
Comment Report abuse

If you are looking for a quick light read, this would fit that.
Read more
Helpful
Comment Report abuse