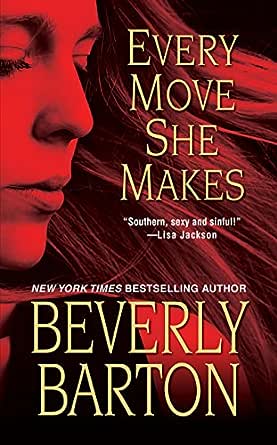 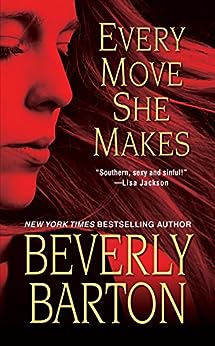 Every Move She Makes Kindle Edition

Beverly Barton was an award-winning, New York Times bestselling author of more than 50 novels, including Silent Killer, Cold Hearted, The Murder Game, and Close Enough to Kill. Readers can visit her website at beverlybarton.com. --This text refers to an out of print or unavailable edition of this title.

Hot, steamy nights and dark family secrets abound in Barton's (The Protectors, etc.) suspenseful but somewhat convoluted romantic melodrama. When he was 18 years old, handsome bad boy Reed Conway was convicted of a crime he didn't commit killing his abusive stepfather, Junior Blalock. Out on parole after 15 years and back in his hometown of Spring Creek, Ala., Reed is determined to find the real murderer. But it seems everyone had a reason to kill Junior, including Senator Web Porter, the man who prosecuted Reed when he was the county DA. Meanwhile, the murderer, aware of the danger posed by Reed's probing, arranges events that will put the parolee back in the slammer. Complicating matters further is Reed's attraction to Web's daughter, taciturn Ella Porter. Ella is drawn to Reed's raw strength, and together the two overcome their vastly different backgrounds, join forces and try to find the real killer. The narrative's myriad subplots including a romance between Reed's mother and Web, and a sibling rivalry between Ella's aunt and mother may overwhelm the reader, but the novel's sizzling sexual chemistry and high suspense will satisfy sunbathers longing for sultry poolside reading. (Sept.)Forecast: Romances set in the South, especially those with a high sensuality quotient, are in high demand. Barton's latest will appeal to fans of Olga Bicos and Lisa Jackson and will likely garner respectable sales.

Readers who like "hot and nasty" romantic suspense will relish Barton's contemporary and sexually explicit Southern gothic. For a judge, Ella Porter, the adopted daughter of a wealthy senator and his invalid wife, is pretty naive. She believes her parents' lies about their happy marriage and at 30 is still living at home, waiting for undying love like theirs, until good-looking bad boy Reed Conway is released from prison after serving 15 years for the murder of his violently abusive stepfather. Reed is obsessed with finding out who framed him for killing the man who had made his family's life hell; meanwhile the real murderer, intent on sending Reed back to jail, starts a campaign of terror against Ella, making it look like Reed is at fault. When she confronts him, they discover that the unvoiced attraction they had for each other as teenagers has not abated. They also realize that they have to find the real killer, and events escalate steadily toward an exciting climax. Diana Tixier Herald
Copyright © American Library Association. All rights reserved --This text refers to an out of print or unavailable edition of this title.
Read more

4.4 out of 5 stars
4.4 out of 5
51 global ratings
How are ratings calculated?
To calculate the overall star rating and percentage breakdown by star, we don’t use a simple average. Instead, our system considers things like how recent a review is and if the reviewer bought the item on Amazon. It also analyzes reviews to verify trustworthiness.
Top reviews

DiAnn Fields
5.0 out of 5 stars Another sizzling murder mystery by Beverly Barton
Reviewed in the United States on September 25, 2001
Verified Purchase
Every Move She Makes is another romantic murder mystery by Beverly Barton, the premiere author of "The Protectors" series.
Reed Conway has just been released from serving 15 years for the murder of his stepfather. Now that he is out, it is time to go back to his hometown to find the real killer. The years spent in prison have not been easy for Reed, but he is a survivor.
Ella Porter, the daughter of the man who sent Reed to prison, is a thirty year old judge. As a shy teenager, she had a crush on Reed, the star athlete who was also "a bad boy". Unknown to her, Reed was aware of her in high school, but did not attempt to date her.
Angered by his conviction, Reed sent Ella a few letters before he went to prison which frightened her when he described his desire for her. After Reed is released, more suggestive letters are sent to Ella - did Reed send them? Ella doesn't know what to think - does Reed want to hurt her or does he feel the electricity for her that she feels for him?
Besides Reed and Ella's relationship, there are secondary characters that make this a well-rounded and complete story. The question is who framed Reed and there are many suspects which makes the book exciting to the very last page.
If you have read another Beverly Barton book, Lone Wolf's Lady, the hero from that book, Luke, also was sent to prison for a crime he didn't commit and he and the heroine work together to solve the mystery. This book also has several "steamy" scenes.

Rose
TOP 1000 REVIEWER
3.0 out of 5 stars EVERY MOVE SHE MAKES
Reviewed in the United States on April 23, 2019
Verified Purchase
I have loved every Beverly Barton book that I've read, until this one. It was still a complex plot with good characters, but some of the sex scenes I found to be a little distasteful.
Read more
One person found this helpful
Helpful
Comment Report abuse

Tracy Vest
4.0 out of 5 stars Bad boy parolee and judge make a hot duo
Reviewed in the United States on October 25, 2006
Verified Purchase
Wrongly convicted of murdering his step father, Reed's been released from prison after serving a 15 year sentence. Though he earned a college degree and nearly a master's, the only job he can get is as a mechanic at his cousin's garage. He is dedicated to finding the real culprit behind the murder, regardless of the cost. When judge Ella Porter, daughter of the DA that put Reed away starts receiving nasty letters similar to the ones Reed sent to her while in prison, she confronts him, not realizing that someone sinister will stop at nothing to make sure Reed is back in jail. Ella has always been drawn to Reed, and finds that the forbidden passion he promises is too much to resist. Reed doesn't count on actually falling for the daughter of his enemy, and soon she's joining him in his quest for the truth, much to her parent's displeasure (yes, she's 30 and still lives at home!).

Could it be Ella's father Webb Porter, now a senator with a roving eye and zipper, and a shared past with Reed's mother; could it be Judy, Reed's harried mother who suffered greatly at the hands of her sadistic husband; could it be Reed's sister Regina, whose near rape at the hands of her stepfather have cause irreparable damage; or could it be Ella's aunt and uncle who also share a sordid past with the deceased. With plenty of suspects, the two have their work cut out for them!

Ella and Reed make a striking duo. And boy does this couple sizzle! Barton's gothic tale of murder, forgiveness, and love has plenty to keep you entertained, though I felt there were far too many romantic entanglements for a single novel, causing some of them to not be as developed as they could have been.
Read more
11 people found this helpful
Helpful
Comment Report abuse

Tracey Stevenson
5.0 out of 5 stars Great story
Reviewed in the United States on April 3, 2018
Verified Purchase
Enjoyed the characters! The story line. Fits with so many family secrets and things people sacrifice for their families. Nice surprising twist on who the killer was!
Read more
Helpful
Comment Report abuse

Linlee
4.0 out of 5 stars Another hit!
Reviewed in the United States on May 17, 2016
Verified Purchase
One of the first BB books I read. Have since read all her works and still find this a favorite. Bad boy meets good girl with a twist.
Read more
Helpful
Comment Report abuse

Amazon Customer
5.0 out of 5 stars books
Reviewed in the United Kingdom on February 1, 2009
Verified Purchase
could not put this book down..have ordered more from this author. keep writing and i will keep reading..
Read more
5 people found this helpful
Report abuse
See all reviews