Everything You Know about Indians Is Wrong (Indigenous Americas) 1st Edition, Kindle Edition 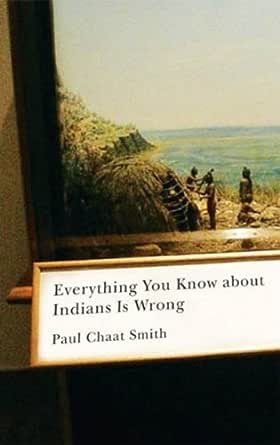 Flip to back Flip to front
Audible Sample Playing... Paused   You are listening to a sample of the Audible narration for this Kindle book.
Learn more
ISBN-13: 978-0816656011
ISBN-10: 0816656010
Why is ISBN important?
ISBN
This bar-code number lets you verify that you're getting exactly the right version or edition of a book. The 13-digit and 10-digit formats both work. 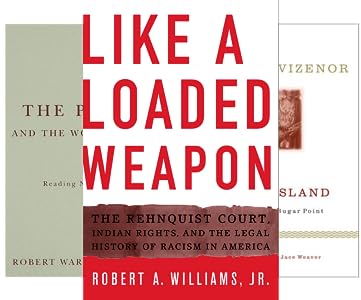 In this acerbic collection of essays, Comanche cultural critic and art curator Smith (Like a Hurricane) riffs on the romantic stereotypes of Indian as spiritual masters and first environmentalists, as tragic victims of technology and civilization, as primal beings brimming with nomad authenticity, their every artifact a gem of folk art. Such tropes, he complains, hide the riotous complexity of the modern Indian experience, which he visits in pieces that explore his grandfather's Christian church, Sitting Bull's savvy manipulation of his media image (he had an agent) and the author's own Comanche forebears, who were both world-class barbarians and avid adopters of the white man's gadgetry. These loose-limbed essays range all over the landscape, from Hollywood westerns to the 1973 siege of Wounded Knee to (somewhat obscurely) the contemporary Indian art scene. Smith doesn't entirely square his view of Indians as just plain folks with his advancing of a unique Indian cultural perspective, but his keen, skeptical eye makes such ironies both amusing and enlightening. Photos. (May)
Copyright © Reed Business Information, a division of Reed Elsevier Inc. All rights reserved. --This text refers to the hardcover edition.

Smith's recognition of the contradictions within his own life inspires his readers to resist adherence to categories that may seem comforting but actually limit personal growth.  --NeoAmericanist (added by author)

In this rigorously insightful collection of essays written between 1992 to 2008, Smith, a wry, sharp-edged cultural critic, and associate curator for the NMAI, addresses the myriad ironic complexities of American Indian reality. --Washington Post (added by author)

Paul Chaat Smith is associate curator at the Smithsonian’s National Museum of the American Indian. He is the coauthor, with Robert Warrior, of Like a Hurricane: The Indian Movement from Alcatraz to Wounded Knee.
--This text refers to the hardcover edition.
Read more

Joyce Godwin Grubbs
5.0 out of 5 stars Gritty, authentic, edgy and no-holds-barred Indigenous read.
Reviewed in the United States on November 19, 2013
Verified Purchase
The most outstanding book I have read on Indians (Indigenous Americans) and one of the best I have read of Paul Chaat Smith. The book is authentic, edgy, no-holds-barred. It is what all Americans need to read to get to the crux of all that is the Indian struggle and the Indian successes. This is an inspiration to the Indians, and to the readers who seek to truly understand the culture that is North American Indigenous.
Read more
8 people found this helpful
Helpful
Report abuse

HomeschoolOhioMom
5.0 out of 5 stars If you want to know true Native history... read this book.
Reviewed in the United States on December 6, 2014
Verified Purchase
Direct, to the point and, in many areas, absolutely hilarious. A wonderful read.
Read more
4 people found this helpful
Helpful
Report abuse

TofuGirlSF
5.0 out of 5 stars Startling insights
Reviewed in the United States on September 19, 2011
Verified Purchase
A compelling insight on every page, and your friends will be grow tired of your telling them cool stuff you learned from this wonderful book. Beautifully written.
Read more
9 people found this helpful
Helpful
Report abuse

Ursiform
4.0 out of 5 stars Personal and quirky
Reviewed in the United States on May 25, 2009
Verified Purchase
Paul Chaat Smith is an associate curator at the National Museum of the American Indian, an institution he once described as "a bad idea whose time has come". That line alone should give warning about the unvarnished opinions he offers in this book of essays, grouped to offer a flow of sorts.

In the earlier parts of the book he discusses how the idea of "Indians" didn't exist until the Europeans arrived. Before that time the Americas was divided up between nations, much as Europe was. There were conflicts between nations, and boundaries changed with time, but that also happened in Europe. It was the Europeans who imposed the idea that all natives were one group of primitive people divided into "tribes", rather than a kaleidoscope of cultures similar to the situation in Europe.

He continues on to explain, often quite amusingly, how movies and other media formed a popular but inaccurate image of native people. (Crazy Horse was nicknamed "Curly" as a kid?!)

Next Smith talks about his involvement with the American Indian Movement. For those who lived through the era, it provides another viewpoint. (A dysfunctional take, by the way.) For younger readers it can serve a brief primer on ancient history.

Then he move into contemporary Indian art. I'll just say I have different tastes than the author, especially regarding performance art.

In the end he returns to the dichotomy between how Indians are viewed and how they really live.

There are parts of this book I really enjoyed, and parts where I disagreed with the author. But it's a short book, and a personal one, and his voice deserves to be heard. If the subject interests you, go ahead and read it. Even when you disagree you'll be forced to think.
Read more
51 people found this helpful
Helpful
Report abuse

indigo
5.0 out of 5 stars Indians are People Too.
Reviewed in the United States on February 20, 2013
Verified Purchase
Well written and interesting to read. This is a modern take of how silly non-Indians can be, New Agers, Hippies, Quakers and other free-thinkiners. I'll read anything written by Paul Chaat Smith
Read more
2 people found this helpful
Helpful
Report abuse

Theresa Potente
4.0 out of 5 stars Essays to consider while traveling.
Reviewed in the United States on May 10, 2014
Verified Purchase
Some of the essays are better than others but the shift in the perspective the reader gets, is interesting and challenging.
Read more
One person found this helpful
Helpful
Report abuse
See all reviews

fomocohipo
5.0 out of 5 stars Informative
Reviewed in Canada on August 20, 2014
Verified Purchase
Great to read from a different perspective. Funny, sad and revealing.
Read more
Report abuse
See all reviews