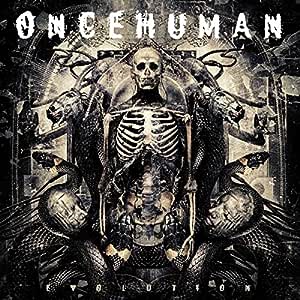 Once Human Format: Audio CD
4.6 out of 5 stars 61 ratings
See all 3 formats and editions Hide other formats and editions
Includes FREE MP3 version of this album.&nbspProvided by Amazon Digital Services LLC. Terms and Conditions. Does not apply to gift orders.&nbspComplete your purchase to save the MP3 version to your music library.
Available at a lower price from other sellers that may not offer free Prime shipping.

Having been focused on recording, producing and developing bands, I had not picked up the guitar out of passion for twelve years but as soon as I started writing with Lauren (Hart, vocals) I fell in love with what we were making, and I wanted to play in
the band and get back on stage, states guitarist Logan Mader, whose name will be familiar to metalheads not only for his production and mixing work on records from the likes of Gojira, Fear Factory and Devildriver, but also as the original guitarist in Machine
Head and his late 90s stint in Soulfly.
With the lineup rounded out by drummer Dillon Trollope, bassist Damien Rainaud and guitarists Skyler Howren and recent recruit Max Karon, everything about Evolution makes it clear that this is a band pushing itself to deliver something that truly stands apart.

Having made waves with their 2015 debut, The Life I Remember, the band have dramatically progressed beyond the melodic death metal sound of that release into something more complex, emotional, distinct, and devastatingly heavy. Evolution is not just the title of Once Human s sophomore release, it s an armor-plated declaration.

The first song most will encounter will be lead off single Eye Of Chaos , which is a hell of a way to grab the attention of both those new to the band and their followers.

Bringing together all of the elements that make the album so compelling, it has an immediacy that is undeniable.
Armed with this track and the eight others comprising Evolution, Once Human intend to build on the groundwork laid down by the two tours they did in support of their debut, and make it damn clear that this is a band to be taken seriously.

4.6 out of 5 stars
4.6 out of 5
61 global ratings
How are ratings calculated?
To calculate the overall star rating and percentage breakdown by star, we don’t use a simple average. Instead, our system considers things like how recent a review is and if the reviewer bought the item on Amazon. It also analyzes reviews to verify trustworthiness.
Top reviews

Traveling Rebel
5.0 out of 5 stars Amazing melodic death album!
Reviewed in the United States on October 5, 2017
Verified Purchase
I just found this band recently and this album is badass!! Eye of Chaos... must have replayed it 50 times in a row one day!! Tight riffs, awesome drums, and the lead singer is amazing!! Definitely recommend for melodic death metal peeps!
Read more
Helpful
Comment Report abuse

Amazon Customer
5.0 out of 5 stars The best!
Reviewed in the United States on September 19, 2017
Verified Purchase
Awesome liricks and sound. The vocals are incredible
Read more
Helpful
Comment Report abuse
See all reviews

Philip
5.0 out of 5 stars logans back!
Reviewed in the United Kingdom on March 16, 2017
Verified Purchase
Very different to what's out there right now and a great album. Its a grower n heavy as f#*ck! If you like Arch enemy n the like, you'll love this! Can't wait for tour!
Read more
Report abuse