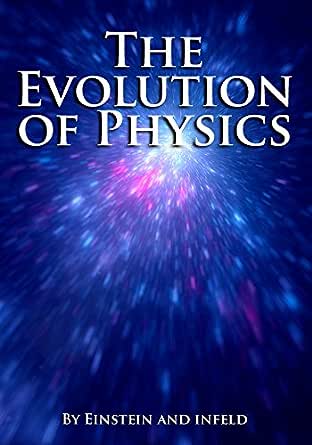 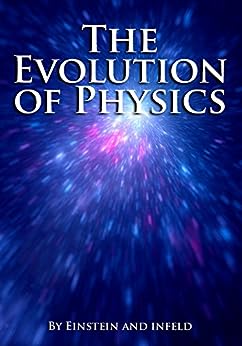 The Evolution of Physics Kindle Edition

Albert Einstein (1879 1955) was born in Germany and became an American citizen in 1940. A world-famous theoretical physicist, he was awarded the 1921 Nobel Prize for Physics and is renowned for his Theory of Relativity. In addition to his scientific work, Einstein was an influential humanist who spoke widely about politics, ethics, and social causes. After leaving Europe, Einstein taught at Princeton University. His theories were instrumental in shaping the atomic age.

4.3 out of 5 stars
4.3 out of 5
125 global ratings
How are ratings calculated?
To calculate the overall star rating and percentage breakdown by star, we don’t use a simple average. Instead, our system considers things like how recent a review is and if the reviewer bought the item on Amazon. It also analyzes reviews to verify trustworthiness.
Top reviews

Vazhaspa Spitman
2.0 out of 5 stars Excellent Book in Defective Format
Reviewed in the United States on October 10, 2017
Verified Purchase
This is somehow the repetition of the warning by other reviewers concerning the format of the e-book version. However, I did not notice the warnings, and I hope future customers pay attention to it. The ebook version is just a scanned IMAGE of the book in the poorest form you can imagine. So not only it takes too much space and time to be downloaded, you cannot search any word in the ebook version!. This raises the question: why not go with the FREE PDF version of this old book that you can easily find and download from internet and then read on your Kindle or laptop? (Search for: The Evolution Of Physics: Einstein, Albert.: Free Download) At least that is very clean and searchable. besides being free and in every format you like. In short: the current ebook version of this great book is a SCAM. By the way, I have no idea how one can return an ebook. Just trying though!!
Read more
22 people found this helpful
Helpful
Comment Report abuse

Herbert Gintis
5.0 out of 5 stars Overall Brilliant
Reviewed in the United States on October 24, 2020
Verified Purchase
The book has three parts: classical physics, relativity, and quantum physics (there wasn't much particle physics or cosmology in 1938, after all). The classical treatment is an extended examination of Galilean invariance, and is both brilliant and nicely presented (without equations). The special relativity theory part explains the twin principles of inertial frames and the constancy of the speed of light. It is very nicely done, although it has to be mysterious for the reader when even the simplest algebra is off limits. The general relativity part is presented as the extension from inertial to arbitrary frames, from with gravity is introduced via the equivalence of inertial and gravitational mass. I suspect this is mostly mysterious for the reader, but I'm not sure.
The quantum section is the least successful. The authors center on particle energy discreteness, but do not really get into the strange and mysterious aspects of quantum mechanics. Nor do the explain spin, fermions, bosons, etc.

Shmuelman
2.0 out of 5 stars A brilliant book but Not in ebook format
Reviewed in the United States on November 14, 2020
Verified Purchase
A brilliant book, I read it 40 years ago, but the format is like a PDF photo rather than an e-book. You cannot highlight, look up terms or resize the type. The pages are fixed in length. It is difficult for me to read as the type is rather small. It should have been rekeyed; it’s a short book. Maybe there were copyright restrictions. I found it impossible to read on my phone, it required my iPad reader.
Read more
Helpful
Comment Report abuse

Jamie
5.0 out of 5 stars Amazing story of special and general relativity
Reviewed in the United States on March 20, 2013
Verified Purchase
When Einstein published his General Theory of Relativity, only a small fraction of physicists understood his work. One of the most remarkable aspects of this book, written for the curious non-physicist, is that special relativity, then general relativity, is unfolded for the lay reader in such a way that the reaction is, "Of course!", as if the universe could not be any other way. I now understand better Einstein's purported statement to a journalist when asked how he would have felt if the bending of starlight around the sun during a solar eclipse had NOT confirmed predictions of the General Theory. Einstein purportedly said, "Then I would have felt sorry for God." Amazing book.
Read more
4 people found this helpful
Helpful
Comment Report abuse

CireSnave
4.0 out of 5 stars Picture on Amazon is the WRONG version of this book!
Reviewed in the United States on March 26, 2016
Verified Purchase
While the majority of the content of the book is exactly as it is stated on Amazon, the book shown in the picture on Amazon is NOT ISBN 13: 978-0671201562. The book in the picture has a different introduction by Walter Isaacson and a picture of the authors on the cover. The introduction on this book is written by Leopold Infeld. Still, the introduction is most likely not why any of us are buying this book and I'm relatively certain the content will still be roughly the same.
Read more
Helpful
Comment Report abuse

Jim Harmon
1.0 out of 5 stars Wrong media. Buy this in book form instead.
Reviewed in the United States on January 31, 2017
Verified Purchase
This rating is for the e-book version. It was not entered as text, but was photographed two pages at a time. It does not display right. Sometimes on my Kindle it would skip a page. This was really the wrong media.
Read more
9 people found this helpful
Helpful
Comment Report abuse

ana
3.0 out of 5 stars Really good service
Reviewed in the United Kingdom on December 3, 2018
Verified Purchase
Good book and arrived really fast. The only thing I don’t like is that the writing is really small.
Read more
Report abuse

Sharangdhar
3.0 out of 5 stars Paperback covering needs improvement
Reviewed in India on April 2, 2019
Verified Purchase
Pros:- *the content is awesome and fascinating, and page quality is also good

Cons:- *paperback covering is not top notch, there is a space of improvement
*And bookmarks are also not provided

Londyn Chu
5.0 out of 5 stars From the man himself
Reviewed in Canada on March 26, 2018
Verified Purchase
This book beautifully describes the idea behind Relativity (and other physical phenomenon) in such a way that anyone can understand it, regardless of your current knowledge in physics. Rather than using mathematical formulae and equations to describe how Relativity (and other laws) behaves, Infeld and Einstein bring you through a series of logical puzzles and thought experiments to explain to you how the theory of Relativity came about. You will then realize how this sort of logical thinking was paramount in creating some of the most important theories in modern physics. The clarity expressed in Einstein's thought process is fascinating, and will give you insight into how to breakdown complex problems into very simple and seemingly obvious pieces.
Read more
Report abuse
See all reviews