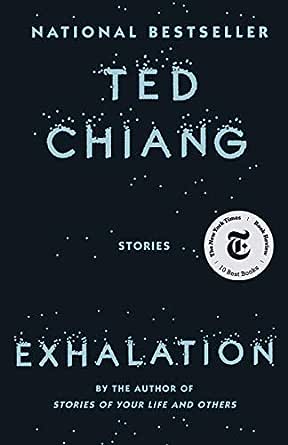 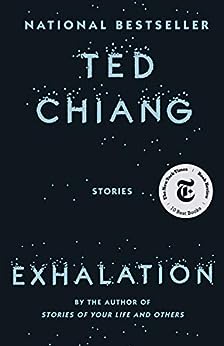 “A collection of short stories that will make you think, grapple with big questions, and feel more human. The best kind of science fiction.”
—Barack Obama, via Facebook

“Illuminating, thrilling. . . . Like such eclectic predecessors as Philip K. Dick, James Tiptree, Jr., Jorge Luis Borges, Ursula K. Le Guin, Margaret Atwood, Haruki Murakami, China Miéville, and Kazuo Ishiguro, Chiang has explored conventional tropes of science fiction in highly unconventional ways. . . . Individual sentences possess the windowpane transparency that George Orwell advocated as a prose ideal. . . . It is both a surprise and a relief to encounter fiction that explores counterfactual worlds like these with . . . ardor and earnestness. . . . Human curiosity, for Chiang, is a nearly divine engine of progress.”
—Joyce Carol Oates, The New Yorker

“Masterful and striking. . . . A fusion of pure intellect and molten emotion. . . . Represents the ideal definition and practice of all science fiction. . . . [Chiang’s] career thus deservedly joins those of only a handful of past masters who likewise did their best work in miniature: Edgar Allan Poe, Harlan Ellison, Ray Bradbury, Theodore Sturgeon. . . . His challenging and rewarding fiction proves that a sizable and appreciative audience exists for the kind of speculative fiction that doesn’t merely offer cosmic explosions, but instead plucks both heartstrings and gray matter in equal measure.”
—Paul Di Filippo, The Washington Post

“Deeply beautiful. . . . These stories are carefully curated into a conversation that comes full circle, after having traversed extraordinary terrain. . . . [Exhalation] is as generous as it is marvelous, and I’m left feeling nothing so much as grateful for it.”
—Amal El-Mohtar, The New York Times Book Review

“A master of the form. [Chiang’s] new collection of nine stories—theming free will and choice, virtual reality and regret—is so provocative, imaginative, and soulful that it makes Black Mirror look drab and dull by comparison.”
—David Canfield, Entertainment Weekly, “The 10 best books of 2019...so far”

“Delirious and exciting as hell . . . [Chiang’s] stories brim with wonder and horror, spectacle and mundanity, philosophy and religion. Tapping into a range of speculative traditions, from pulp and fantasy to the rigorous scientific accuracy of hard sci-fi and the popcorn thrills of soft sci-fi, his work has a profound richness.”
—Stephen Kearse, The Nation

“A handful of living science fiction writers have attained godlike status—N.K. Jemisin, Cixin Liu, and Ann Leckie, to name a few. But Ted Chiang is the only one who’s done it without writing a novel. In fact, he’s published far less than his neighbors on the genre’s current Mount Rushmore, usually just one short story every two years. But oh, his stories. They’re a religious experience. . . . In Exhalation, which could be subtitled ‘Black Mirror For Optimists,’ every story seems crafted with one objective in mind—pure awe. . . . A moving book about fate and free will that is destined to become a literary landmark of the 2010s.”
—Adam Morgan, The A.V. Club

“As much thought experiments as stories, Ted Chiang’s exquisite mechanisms employ science fiction as an instrument to probe the human condition. Like the chronicler of Exhalation’s title narrative, he opens the back of his own head and lays bare its mysterious golden motion for the hushed appreciation of an awestruck audience. Beautifully written and conceived, this is a marvelous, astonishing collection that we would do well to read before the worlds it conjures are upon us. Urgently recommended.”
—Alan Moore

“Exquisite. . . . The stories in Exhalation are a shining example of science fiction at its best. They take both science and humanism deeply seriously.”
—Constance Grady, Vox

“Ted Chiang writes with such a matter-of-fact grace and visionary power that one simply takes on faith that his worlds and his characters exist, whether they are human or robot or parrot; he is the rare author who makes me feel, also, that he believes in his readers, in our integrity and our imagination.”
—Karen Russell, author of Orange World

“Ted Chiang has no contemporary peers when it comes to the short story form. His name deserves to be mentioned in the same breath as Carver, Poe, Borges, and Kafka. Every story is a universe. Every story is a diamond. You will inhale Exhalation in a single, stunned sitting, because true genius doesn’t come along nearly as often as advertised. This is the real thing.”
—Blake Crouch, author of Dark Matter

“Exquisitely crafted. . . . One after another, Chiang’s stories claim their place in your mind until you’re completely swept up in his provocative and at times even charming world. . . . Each story is a carefully considered, finely honed machine. . . . What makes Exhalation particularly brilliant is that not one of the stories feels like it’s designed to be thought-provoking in a stilted, academic way. Chiang is an entertaining, empathetic writer first, before being one of contemporary sci-fi’s intellectual powerhouses, and each story reads that way. . . . [Chiang is] one of the most exciting voices in his field.”
—BookPage (starred review)

“Chiang’s long-awaited second collection. . .continues to explore emotional and metaphysical landscapes with precise and incisive prose. . . . Chiang remains one of the most skilled stylists in sf, and this will appear to genre and literary-fiction fans alike.”
—Booklist (starred review)

“An instant classic. . . . Visionary speculative stories that will change the way readers see themselves and the world around them: This book delivers in a big way.”
—Kirkus Reviews (starred review)

“Chiang is always thought provoking, and his latest collection is no exception.”
—Library Journal (starred review)

Ted Chiang’s fiction has won four Hugo, four Nebula, and four Locus Awards, and has been featured in The Best American Short Stories. His debut collection, Stories of Your Life and Others, has been translated into twenty-one languages. He was born in Port Jefferson, New York, and currently lives near Seattle, Washington. --This text refers to an alternate kindle_edition edition.

THE MERCHANT AND THE ALCHEMIST'S GATE

O mighty Caliph and Commander of the Faithful, I am humbled to be in the splendor of your presence; a man can hope for no greater blessing as long as he lives. The story I have to tell is truly a strange one, and were the entirety to be tattooed at the corner of one’s eye, the marvel of its presentation would not exceed that of the events recounted, for it is a warning to those who would be warned and a lesson to those who would learn.

My name is Fuwaad ibn Abbas, and I was born here in Baghdad, City of Peace. My father was a grain merchant, but for much of my life I have worked as a purveyor of fine fabrics, trading in silk from Damascus and linen from Egypt and scarves from Morocco that are embroidered with gold. I was prosperous, but my heart was troubled, and neither the purchase of luxuries nor the giving of alms was able to soothe it. Now I stand before you without a single dirham in my purse, but I am at peace.

Allah is the beginning of all things, but with Your Majesty’s permission, I begin my story with the day I took a walk through the district of metalsmiths. I needed to purchase a gift for a man I had to do business with, and had been told he might appreciate a tray made of silver. After browsing for half an hour, I noticed that one of the largest shops in the market had been taken over by a new merchant. It was a prized location that must have been expensive to acquire, so I entered to peruse its wares.

Never before had I seen such a marvelous assortment of goods. Near the entrance there was an astrolabe equipped with seven plates inlaid with silver, a water clock that chimed on the hour, and a nightingale made of brass that sang when the wind blew. Farther inside there were even-more-ingenious mechanisms, and I stared at them the way a child watches a juggler, when an old man stepped out from a doorway in the back.

“Welcome to my humble shop, my lord,” he said. “My name is Bashaarat. How may I assist you?”

“These are remarkable items that you have for sale. I deal with traders from every corner of the world, and yet I have never seen their like. From where, may I ask, did you acquire your merchandise?”

“I am grateful to you for your kind words,” he said. “Everything you see here was made in my workshop, by myself or by my assistants under my direction.”

I was impressed that this man could be so well versed in so many arts. I asked him about the various instruments in his shop and listened to him discourse learnedly about astrology, mathematics, geomancy, and medicine. We spoke for more than an hour, and my fascination and respect bloomed like a flower warmed by the dawn, until he mentioned his experiments in alchemy.

“Alchemy?” I said. This surprised me, for he did not seem the sort to make such a sharper’s claim. “You mean you can turn base metal into gold?”

“I can, my lord, but that is not in fact what most seek from alchemy.”

“They seek a source of gold that is cheaper than mining ore from the ground. Alchemy does describe a means to make gold, but the procedure is so arduous that, by comparison, digging beneath a mountain is as easy as plucking peaches from a tree.”

I smiled. “A clever reply. No one could dispute that you are a learned man, but I know better than to credit alchemy.”

Bashaarat looked at me and considered. “I have recently built something that may change your opinion. You would be the first person I have shown it to. Would you care to see it?” --This text refers to an alternate kindle_edition edition.
Read more