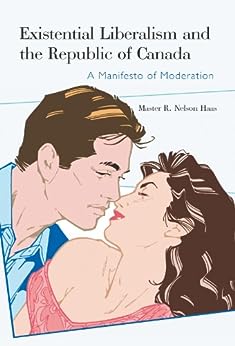 Existential Liberalism and the Republic of Canada: A Manifesto of Moderation Kindle Edition

When he left graduate school, R. Nelson Haas dreamed of changing political theory and Canadian politics for the better. However, this dream was cut short by his mysterious and untimely death. At the time, Haas was putting the finishing touches on his now-infamous manifesto of moderation, Existential Liberalism and the Republic of Canada. His death robbed the world of a true political hero and prevented the official release of his book, leaving only a few bootleg editions of Existential Liberalism to circulate through the literary black market.

Now, for the first time in recorded history, the complete, unaltered, unabridged, definitive edition of Haass magnum opus is available to fans and foes alike. Translated by Edward Coke, and featuring a fully researched introduction and afterword by the esteemed British editor Robert Von Stricker-Beresford, PhD, FRS, OBI, this new edition of Existential Liberalism and the Republic of Canada offers an in-depth critique and reappraisal of liberal theory along with a new model for the Canadian constitution. This edition also sheds new light on what really happened to Haas on that fateful night in Hamilton in 2010, including addressing the rumors of the involvement of the Existential Serial Killer.