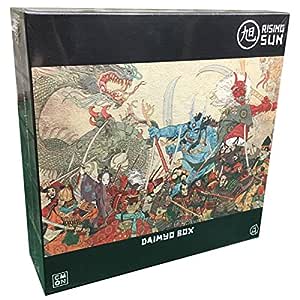 Rising Sun Board Game + 3 Expansions Bundle with the Kami Unbound, Monster Pack and Kickstarter Exclusive Daimyo Box Expansion by Cool Mini or Not

Brand: CMON Limited (Cool Mini or Not
2.9 out of 5 stars 3 ratings
Available from these sellers.

2.9 out of 5 stars
2.9 out of 5
3 global ratings
How are ratings calculated?
To calculate the overall star rating and percentage breakdown by star, we don’t use a simple average. Instead, our system considers things like how recent a review is and if the reviewer bought the item on Amazon. It also analyzes reviews to verify trustworthiness.
Top reviews

The game is played over a set of three seasons (rounds). You start in spring then head into summer and finally autumn. You end in winter where the land is settling down and you calculate all the final victory point totals to see who wins. During each season you go around the table and each player draws 1 of 4 tiles that represent certain actions that you and other players can take such as harvesting resources, buying a training card, recruiting your warriors, moving your troops around the board or even BETRAYING someone….more on that soon.

So as these tiles are selected they are lain down on the board in specific spots along this track and once you reach a certain point on the track other things happen such as collecting the benefits from worshipping certain Kami (if you place one of your Shinto minis there that is). There are 7 total spaces for these tiles so everyone around the table gets a chance to pick a tile and partake in the benefits during each season.

OH! And you can form alliances…..and commit the dreaded BETRAYALS!! So let’s discuss this a bit. At the beginning of each of the seasons you actively discuss with the other players on making alliances. You want to make an alliance if it benefits you in some way BUT you need to make sure that you reap more out of the deal that the other person in some way because there is just one winner and that’s YOU. So yeah be strategic. One of the tiles you can lay down is a betrayal tile which basically breaks your alliance immediately and allows you to replace any 2 troop minis on the board with 2 of your own. A very powerful ability, HOWEVER you also suffer a loss of Honor. Honor basically breaks all ties in this game and now I know what you’re thinking. “How many ties could there be in this game?!” Well let me tell ya it happens a lot more than you would expect. I was surprised at how many different aspects of the game were so evenly matched that they lead to ties. So honor is for sure something you want to have.

Once you get the 7 tiles laid down which basically end up consisting of moving your troops around the board to different lands and adding more troops and just generally strengthening your clan in one way or another, you then move on to the war phase. During the war phase you visit each land (which are assigned a random number at the beginning of each season) and if there are multiple troops on that particular land of different clans, they do battle. The battling is actually really innovative as well. You have a player screen that is up so the other players cannot see your decisions and you assign coins that you can accrued during the previous phase to specific spots on a war card you each have. Then reveal the cards at the same time and see how has won each specific type of battle based on who put the most coins on each spot if any. It’s basically wagering against the other player on the battle but here’s the interesting part….if you win the land from the battle you have to give the coins you wagered to the losers so even if you lose you still have some power in case you have to do battle again before that season ends. It’s a really cool way to keep players in the game and not feel like a loss is like a TOTAL loss. The winner of course gets the victory point value for capturing that land. And Victory points are the key to winning.

That’s basically the meat of the game right there. But wait there’s more! There are monsters you can summon to do your bidding! During the tiles placement phase one of the particular tiles allows you to buy a card. And these cards do all sorts of things that help you like giving you more victory points at the end of the game or giving you more money to use at the start of the war phase and so on. The coolest ones though are the monster cards. The game comes with quite a few completely different monster minis that are actually quite a bit bigger than the regular troop minis. Not only that but these are some of the best minis I have seen. VERY detailed and really cool looking. I’m just itching to paint them. Anyways, when you summon a monster you can immediately place it on one of your strongholds and these things all have different powers that do a wide range of stuff. Let’s just say it VERY advantageous to have one on your side. Once you collect the monster it stays with you the rest of the game. Even if killed it can be re-summoned back out later.

This is a game I can honestly say the more people that you have playing, the better it becomes. You can have a minimum of 3 and it works…..but with the full 5 you really get the whole experience. It’s so awesome sitting around a table plotting against the person sitting across from you and whispering into the ear of your ally some devious ploy. Little does your ally know you were planning to betray him the next turn and turn the tables!!! Also you don’t even have to form alliances either. You can go it along against the rest and you still get benefits BUT the tiles do have the added benefit that if you are allied both you and your ally gets the benefit. So even if he or she draws the tile you would also benefit from it.

All in all I REALLY enjoyed this one and am already plotting devious schemes on how I can bring it to the table more often. My entire group all had nothing but good things to say about it. Again if you are more of a solo player or can only get 2 player games out then this won’t be for you. But for those instances when you have 3 or more players, this is one game you will wish you had.

Stephanie Caamano
1.0 out of 5 stars Not worth it...
Reviewed in the United States on July 20, 2018
Way to expensive. If you take apart what is included you'd save more purchasing the individual boxes and finding the exclusive stuff on ebay.

Jimbob_Rebel
1.0 out of 5 stars Not quite as much fun as watching paint dry;
Reviewed in the United States on June 10, 2018
This is a review of the product, not the seller. This is, without a doubt, the WORST GAME I HAVE EVER HAD THE DISTINCT DISPLEASURE OF SUFFERING THROUGH. Games are supposed to be about doing things, taking action, seizing opportunities, but not this one. I've played this game with my gaming group, three of the five players had played it before, and I have no idea why they agreed to play it a second time. Anything you think you might want to do, you won't ever get a chance to do unless you happen to randomly draw the right tile. The combat system is an outright joke, whomever has the most forces in a provence at the end of the year during the war phase wins. No dice, no luck and no skill. Just be there with the most. Seriously, they'd have done better to rip off Risk's combat system. Risk at least is fun to play. You do have a chance, during the war phase, to score victory points by having your troops commit seppuku, and you may, if you happened to somehow acquire the card which gives you a couple ronnin, use the mercs to turn the tide of battle, but this "bluff" aspect of the game is blunted by the rule requiring you to tell your opponents how many coins and ronnin you have. Diplomacy and alliances are touted as an important aspect of this game but there's no ryme or reason for making alliances, you just pair up with whoever's available so you get an extra action. I could go on and on about this beautiful loser, and it is probably is the most visually appealing game I've ever seen, but to say that it disapoints is a gross understatement. If you've bought the game, then, by all means, unbox it, set it up, admire it's beauty, and then pack it away before it can bore or frustrate you with three hours of doing next to nothing.
Read more
6 people found this helpful
Helpful
Comment Report abuse
See all reviews