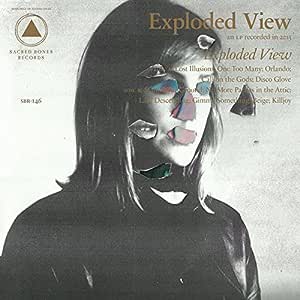 Go Unlimited
Start your 30-day free trial
Stream Exploded View by Exploded View and tens of millions of other songs on all your devices with Amazon Music Unlimited. Exclusive discount for Prime members.
Sold by Amazon.com Services LLC. Additional taxes may apply. By placing your order, you agree to our Terms of Use.

4.9 out of 5 stars
4.9 out of 5
6 customer ratings
How does Amazon calculate star ratings?
Amazon calculates a product’s star ratings based on a machine learned model instead of a raw data average. The model takes into account factors including the age of a rating, whether the ratings are from verified purchasers, and factors that establish reviewer trustworthiness.
Top Reviews

michael moodgroove
4.0 out of 5 stars Another strong album from Anika
Reviewed in the United States on February 4, 2017
Anika is still mysterious, enticing and an after-midnight performer, but I have to say her debut as Anika on Stone's Throw Records was much more accessible, tuneful and more fun than this, which has a more loose, experimental bent too it. It's a consistent album - dark and brooding, still playing with some of musical genres that made her debut great - post punk, chill/coldwave, and industrial. But you'll find she has traded hooks for kind of a more outwardly arty moodiness. As always her singing is like that of a sweet germanic vampire, the NIco comparisons even stronger here. Ratio wise, there are far more plodding, meandering tracks than on the surprisingly danceable debut. Two tracks most similar to the debut being Orlando (superior track) and Call on the Gods. It's still a great record from a unique artist, though. Don't pass it up!
Read more
4 people found this helpful
Helpful
Comment Report abuse
See all reviews from the United States