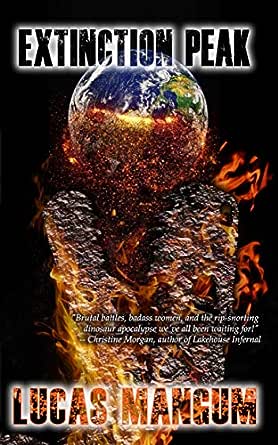 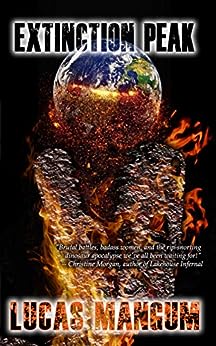 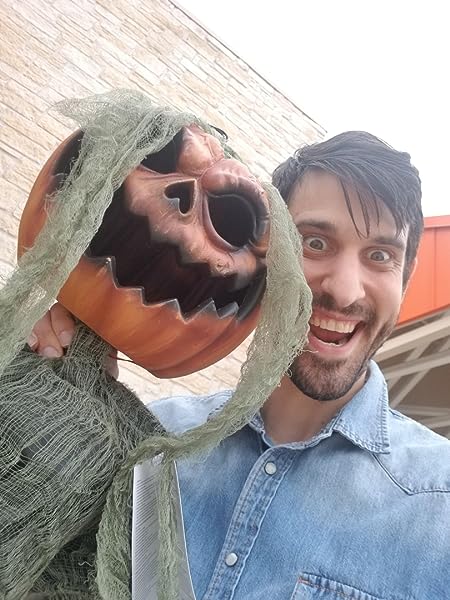 4.8 out of 5 stars
4.8 out of 5
7 global ratings
How are ratings calculated?
To calculate the overall star rating and percentage breakdown by star, we don’t use a simple average. Instead, our system considers things like how recent a review is and if the reviewer bought the item on Amazon. It also analyzes reviews to verify trustworthiness.

Kindle Customer
4.0 out of 5 stars Dinosaur horror fiction at it's best
Reviewed in the United States on November 18, 2020
Verified Purchase
What would you do if the earth was hollow, and when sinkholes started to appear around the globe, dinosaurs started to come out? I am pretty sure that I would be in the first wave of deaths, but if you were to survive, what would existence be like? This is where brother and sister, Johnny and Deandra find themselves at the beginning of the novella, “Extinction Peak.” They spend most of their life in the basement of their dad’s home (who also was a doomsday prepper), plotting a way to break into a corrupt California senator’s mansion to steal his riches. Of course they were also going to have to dodge raptors, pterodactyls, T-Rex, and even the large herbivores that are knocking down buildings and infrastructure. But this is just the beginning.

There is so much that happens in this short novella, but for something so short, there is a great deal of depth. The brother and sister on a mission is just one part of the plot that never loses it’s way, but follows more the philosophy written on page 57 (of the Kindle edition):

“This was no world for heroes. Perhaps it never had been. It was only a place for anarchists.”

Nobody in this book is really a nice guy; there are just characters that you are rooting for more than others. At the end of the day, the ones that succeed are the ones that can be the most ruthless. And there are times when the character conflict is so great that you almost forget that as soon as the victor in the fighting steps outside, they have to deal with being killed by dinosaurs. This makes for a great, cinematic story that should be read by anyone who loves dinosaur destruction and/or garbage people doing garbage things.

Mike Rankin
5.0 out of 5 stars Earth shaking bloody carnage
Reviewed in the United States on October 21, 2020
Verified Purchase
Dinosaurs along with prehistoric creatures have clawed their way from the depths of sinkholes discovered all over the planet causing a post-apocalyptic landscape. In the course of the monstrous mayhem that follows, a brother and sister have planned a daring getaway as part of their quest for survival and sanctuary.
Author Lucas Mangum wields an extreme Earth shaking writing style. He resurrects ancient beasts as well as unidentifiable species believed to be extinct for many years. Pterodactyl, raptors and prehistoric arachnids begin ravishing terrain and obliterating survivors by means of bloody carnage. Elements such as unusual predators, parallel dimensions and a picturesque view of what the world has become advances the plot with racing speed. Mangum’s ability to paint a color coded carnage canvas for the reader is impressive. A great example of this is a band of marauding women laying complete waste to anyone or anything that comes in contact with them resulting in a wake of rotted remains. Not since the pages of adult illustrated Heavy Metal Magazine has there been such female savagery. As the anarchy unfolds the reader receives the added bonus of never knowing a characters fate of salvation or damnation.
I would love to see a continuation or maybe the beginning of an on going mythos of this New Dark Age Lucas Mangum has created. His consistent fresh ideas and capability of keeping the reader engaged makes Extinction Peak a Horror Bookworm five star recommendation. ⭐️⭐️⭐️⭐️⭐️
Read more

Emily
5.0 out of 5 stars Exciting!
Reviewed in the United States on November 13, 2020
Verified Purchase
I will never get over how good Lucas's books are! Extinction Peak is SUPER exciting and flows really well. The pacing of the book is amazing, I feel the story progresses with perfect timing. The detail in this book is what really gets me, it's very colorful, imaginative, and lively! I always feel like I am a part of his books, and Extinction Peak really speaks to me since I think it's a really cool concept to write about in the horror genre. Lucas Mangum = the best at imagery! If you think you'd like a twisted and dark book, dinosaurs, horror, or any combination of these, this is the book for you!
Read more
Helpful
Comment Report abuse

Christine
5.0 out of 5 stars Christine's Horror Fiction Reviews
Reviewed in the United States on October 15, 2020
Remember all those journey-to-the-center-of-the-earth things where intrepid adventurers would go exploring and find out it’s hollow inside and filled with subterranean ecosystems of prehistoric critters? Okay, let’s take that concept and flip it ... open up a cataclysmic bunch of sinkholes all over the world and let them out!

That’s right, dinosaur apocalypse! Rampaging raptors! Flights of pterodactyls! Immense herbivores flattening everything in their path! T-Rexes! Giant snakes! Society might have been prepared for, or at least less surprised by, zombies or a pandemic or something like that. Nobody had dinosaurs on their bingo cards.

Between the initial sinkhole devastation and dinos on the loose, it’s no wonder civilization pretty much instantly collapses, leaving scattered groups of survivors. Among them, Deandra and her sleazeball brother Johnny, holed up in their basement bunker. He’s about the last person on earth she’d want to be stuck with, but there they are, until Johnny hatches a plan to take advantage of the chaos to loot a senator’s nearby mansion.

Stocked up on weapons, they get on a Harley and head out, dodging or fighting off anything that tries to have them for lunch. Thing is, though, as is often the case in these scenarios, the dinosaurs end up playing a background threat to their fellow humans, who, with the polite societal veneers stripped away, prove to be the real monsters.

Personally, I would’ve preferred even more dino-chompy, but the senator in his stronghold with his guards and his fondness for making women fight gladiator-style makes things quite fun too. Likewise the roving band of badass babes with a tank.