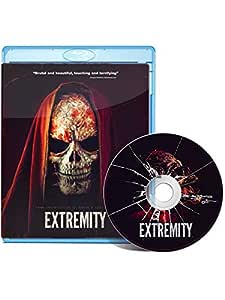 Share
STREAM ANYTIME with Prime Video from $2.99
Have one to sell?
Sell on Amazon

2.5 out of 5 stars
2.5 out of 5
60 global ratings
How are ratings calculated?
To calculate the overall star rating and percentage breakdown by star, we don’t use a simple average. Instead, our system considers things like how recent a review is and if the reviewer bought the item on Amazon. It also analyzes reviews to verify trustworthiness.
Top reviews

Logain UT Ablar
1.0 out of 5 stars Sucked
Reviewed in the United States on January 20, 2019
Verified Purchase
Extremity's premise sounds like it should have been a great film. But it never lived up to its potential for me. The film became horribly predictable once Allison threw her meds away. In short...

Female has daddy issues via the usual sexual assault/rape/incest scenarios.

Needs years of therapy to deal

Deep dives into horror/rape/murder/mutilation as a result

Dumps her meds to go to a house of horrors for...reasons

Kills a bunch of people

20 minutes in and I was snoring. Had to jump back a few scenes in the film a couple of times to catch what I missed and get through it.

Too much was revealed about Perdition too fast. You can't establish a house of horrors as being some extreme hardcore venue only to pull back the curtain in the first 30 minutes exposing it all for the sham it is. It made the entire rest of the film weak because Perdition is nothing but a bunch of posers. Allison called them out on it earlier in the film but even that sucked because her character is annoying so the defiance had no weight behind it. I was really hoping she didn't survive but we can't have nice things. Allison's roommate is more interesting making me shake my head at her still being with Allison who has enough issues to open a magazine stand. Even the Female White Skull (Ashley Smith) was more interesting like a redneck Harley Quinn and I liked her gap. It's cute, I hope she never gets that corrected.

Anyways, I totally didn't like this film but it's a great edition for a Sucky Movie Sundays marathon. 1*

Rob RodenParker
2.0 out of 5 stars Awful turn late in the game
Reviewed in the United States on March 26, 2019
Verified Purchase
I was ok with the movie through most of it. The acting was fine and I kinda liked the story. But then the lead turned into a cold-blooded killer. I felt ABSOLUTELY NOTHING for her and wanted all of her "enemies" to win because the movie actually made you feel something for THEM, not her. The main character is a vile human being and I just wanted her to die. If that was the point of the movie, then I guess it worked, but I literally wanted to turn it off after she snapped.
Read more
4 people found this helpful
Helpful
Comment Report abuse

Bridget G. Hardin
1.0 out of 5 stars Don't Order/ waste of money
Reviewed in the United States on October 10, 2018
Verified Purchase
The store audio is horrible. The music is louder than the actors voices which makes the story un watchable. Don't waste your money
Read more
7 people found this helpful
Helpful
Comment Report abuse

MW
1.0 out of 5 stars Unforgivably cliched and boring.
Reviewed in the United States on May 9, 2020
Verified Purchase
Okay, so.
-get better sets, don’t film in an actual haunted house. It felt like a long commercial.
-don’t rely so heavily on cliches to do you character building (the tattoo, the pill bottle? C’mon). The fact that she has was physically and sexually abused by her dad is just disgusting and the worst cliche of all. A woman can have trauma that does not revolve around a man or rape.
-The bad guys—when introduced—did not seem particularly sinister. The special effect guy seemed nice, actually. The head honcho is just sort of angsty, he doesn’t even have a compelling backstory.
-why is the only female bad guy dressed in underwear and thigh high boots while the men get full coverage?
-none of the torture was actual torture, in fact most of the time was spent waiting and walking. Looooots of walking. Watching someone being waterboarded is really boring. There’s no tension or suspense, never at any point did I suspect she might actually die.
-by making the main character mildly racist, you instantly made her unlikable. I didn’t really care what happened to her.
-stop splitting the focus to the bad guys and the Japanese interviewer. To create more tension, you should focus on the main characters, try to get the audience to feel like they’re the ones this is happening to.
-screenwriters and director, please watch “I Saw the Devil,” “a Serbian Film,” and read “High Life” by Matthew Stokoe before making any more torture/gore-based horror.
Read more
Helpful
Comment Report abuse

Dapper Jay
3.0 out of 5 stars Wait till it becomes available via prime
Reviewed in the United States on November 23, 2018
Verified Purchase
Dont spend the $5 or whatever on this movie. Its worth watching, there is a somewhat expected last 1/3 of the film that makes it a decent movie. It also feels like a the story was a little borderline "man hater" or "blame man for evil" something like that in storyline which was a bit single dimensional/felt like the story telling was trying to hard. I think its a decent film idea and could be better told.
Read more
2 people found this helpful
Helpful
Comment Report abuse

CaveatEmptor
1.0 out of 5 stars WTF just I just watch?
Reviewed in the United States on March 7, 2019
Verified Purchase
That was... horrible. Two freaking hours of horrible. Don't waste your time. It wants so badly to be badass but comes off like an edgy teenager. And then it. keeps... freaking... going. What in the hell did this have to do with extreme haunts?

Teri S.
1.0 out of 5 stars Pure trash, just a poor imitation of “The Game”
Reviewed in the United States on November 17, 2018
Verified Purchase
A boring, forced “female empowerment” bite off “The Game” by David Fincher. Awful, insulting, and insufferable. A couple of good gags here and there, but really just a waste of time. I’d give zero stars if I could
Read more
2 people found this helpful
Helpful
Comment Report abuse

Alexa
1.0 out of 5 stars Meh
Reviewed in the United States on October 17, 2020
Verified Purchase
This is just a garbage heap of a script that exploits the mental and emotional trauma of a female lead character in the name of "horror," which makes it predictable, boring, and worn out.

The quality of the acting is decent, despite that.
Read more
Helpful
Comment Report abuse
See all reviews