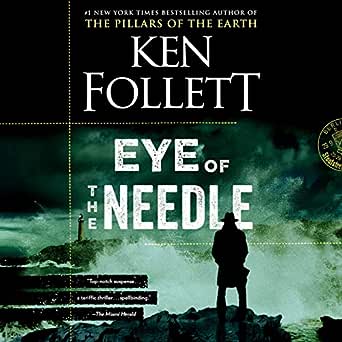 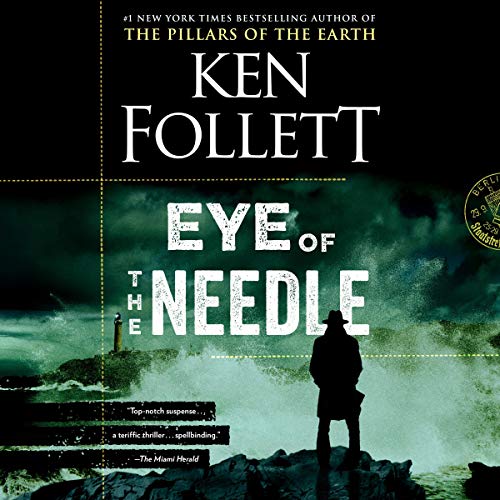 Eye of the Needle

List Price: $29.99
You Save: $6.00 (20%)
By completing your purchase, you agree to Audible’s Conditions Of Use
Sold and delivered by Audible, an Amazon company

4.6 out of 5 stars
4.6 out of 5
4,006 global ratings
How are ratings calculated?
To calculate the overall star rating and percentage breakdown by star, we don’t use a simple average. Instead, our system considers things like how recent a review is and if the reviewer bought the item on Amazon. It also analyzes reviews to verify trustworthiness.
Top reviews

Kindle Customer
5.0 out of 5 stars Not Your Ordinary War Novel
Reviewed in the United States on January 31, 2019
Verified Purchase
How did I ever miss this?? I've read Pillars of the Earth and some others by Follet. Pillars was terrific, but very long. Eye of the Needle was simply fantastic. Planning for D-Day so the German leaders think it will not be at Normandy... A spy novel unlike any other I have ever read. I was glued to it for three days and couldn't stand putting it down to do normal life things. The last 15% was suspense like few books I have ever read. Some of the (real) history I never knew...the fictionalized story was magnificent writing. I did stop and look some things up, especially during the first 20% or so. By the 60% mark or thereabouts, I was reading at a breakneck pace. I knew Follett was talented but this was amazing. If you like stories set in World War II, spy stories, war stories, or anything with terrific characters that the reader really cares about, you must read this. All my friends, put this on your "to read" list right now.
Read more
83 people found this helpful
Helpful
Report abuse

Jephy
5.0 out of 5 stars Best WWII Spy Novel
Reviewed in the United States on January 4, 2019
Verified Purchase
I think "The Brenner Assignment" (O'Donnell) is the only World War II spy story that can hold a candle to this superiorly written novel. 'Brenner' is a true story, however, so it is a must-read for WWII spy enthusiasts for different reasons. "Eye of the Needle" is captivating and realistic fiction: I don't know much about mid-century London, but felt I was living in it reading 'Eye".
Nothing not to love! I will note, however, that there's a load of foreshadowing here, so if you find yourself wondering why, for example [SPOILER] so much detail is given to the AC-as-opposed-to-DC generator in the cottage (p.48), then you aren't the only one who knows this'll come back 'round! (Follett did get the AC/DC mixed up, BTW, as others have noted.) Don't miss!

Locked&Loaded
5.0 out of 5 stars Great introduction to Ken Follett
Reviewed in the United States on January 7, 2017
Verified Purchase
Great introduction to Ken Follett, who has become on of our finest writers. I believe I've now read most everything he's published, but this was my introduction to Follett and as a German-born American, it captured my imagination from the first page. Even knowing from history that 'Die Nadle' did not accomplish what he set out to do does not make this less mesmerizing. The movie with Kate Nelligan and the incomparable Donald Sutherland actually captures the book quite well, but read it before you rent the movie.
Read more
44 people found this helpful
Helpful
Report abuse

Mal Warwick
TOP 500 REVIEWER
5.0 out of 5 stars One of the best spy novels I've ever read
Reviewed in the United States on February 26, 2019
Verified Purchase
British author Ken Follett is best known to a wide public these days for the Kingsbridge Trilogy, his mammoth multi-generational account of an English cathedral town. Together, the three books run to nearly 3,000 pages. They've reportedly sold more than 80 million copies around the world.

But that's only half of the 160 million books Follett has sold since the publication of his first novel in 1974. And he has been topping the bestseller lists ever since the publication of his classic WWII spy novel, The Eye of the Needle, in 1978. The book sold 10 million copies, and it frequently appears on lists of the all-time best spy novels. So it's no surprise that Penguin has brought out a 40th-anniversary edition of the novel. It fully deserves all the attention it gets.

The Double-Cross Committee and a fictional army

The opening scenes in Eye of the Needle take place in August 1940, following the Nazi invasion of France and the Low Countries and shortly before the Battle of Britain began. The story wraps up in June 1944, days before the Normandy Invasion.

Two of the most fascinating inventions of World War II figure prominently in Eye of the Needle. One is the XX Committee, or Twenty Committee, otherwise sometimes know as the Double-Cross Committee, which was entirely real. The other was not real at all: the fictional First United States Army Group under General George S. Patton, or FUSAG. Together, these two elements constituted what may well have been the most elaborate deception ever deployed in war. Thousands of people participated in this massive effort. The deception played a major role in convincing Adolf Hitler that the Allies' invasion in the summer of 1944 would be directed at the Pas-de-Calais and not at Normandy. Some historians credit it as decisive in the Allied victory.

A story securely grounded in history

Follett has grounded the story securely on the historical record—with the possibility of one major exception. Latter-day accounts of espionage in World War II contend that MI5 rounded up every single spy sent to Britain by the Abwehr. Some were executed by hanging. Others were "turned" into double agents and conveyed misleading information to their masters. So, Follett's conceit in Eye of the Needle that a German spy managed to elude capture for six years may be sheer fiction. However, it makes for a fabulous story.

A German spy, a classics professor, and young newly-weds

The action pits a brilliant German spy, "Henry Faber," against an academic recruit to MI5, Percival Godliman. "Professor Godliman knew more about the Middle Ages than any man alive." He had served in British intelligence in the First World War, which helps explain why his uncle, Colonel Andrew Terry, would recruit him as a spycatcher with the invasion of Britain on the horizon. It falls to Godliman to head the team that labors for years to identify Faber. A young couple, David and Lucy Rose, round out the complement of major characters. "Faber . . . Godliman . . . two-thirds of a triangle that one day would be crucially completed by the principals, David and Lucy."

In the Preface to the 40th-Anniversary Edition, Follett writes, "I was twenty-seven when I wrote Eye of the Needle. Reading it now I'm surprised, and proud, that I could do something that good when I was so young . . . Nowadays it takes me three years to write a novel. I wrote most of Eye of the Needle in three weeks. I wish I could do it again." So, Follett doesn't get high marks for modesty, but his pride is understandable.

Lady Dido
5.0 out of 5 stars Absorbing, comprehensive, educational, exciting.....what more could you want?
Reviewed in the United Kingdom on January 23, 2017
Verified Purchase
At last I have found an author to rival Robert Harris! I have been meaning to read a Ken Follett novel for years and finally decided to try out his very first book, written at the age of only 28. I am so pleased that I did.

The plot was fascinating and believable (except perhaps for one extremely unlikely coincidence). Whilst the story line and characters were fictitious, the background to the fiction was excellent and accurate. The research was meticulous - I could totally trust all that I learned about espionage and tactics in World War II. To be entertained and educated in one book is an ideal combination.

The main character was exceptionally well-drawn. I want to avoid spoilers so won't say too much, but the author demonstrated how you can hate, admire, despise and respect a person. My feelings swung from one to the other as the story progressed to a satisfactory conclusion.

Obviously, this review is many years late and so probably won't be read - but, if you see this and are wondering what to read next, do give Follett a try. He has written many novels and will keep you going for years!
Read more
27 people found this helpful
Report abuse

Appleton
5.0 out of 5 stars One of my all time favourites. a must read!
Reviewed in the United Kingdom on September 16, 2016
Verified Purchase
I had this on my "to read" list for about 2 years, but kept delaying reading it due to the belief that it may have only been good due to the time it was written in... how wrong was I! This is one of the best books I have read in years, Ken Follett really knows how to build suspense and characters.

I also loved the setting and how much there is to learn about world war 2...

One of my all time favourites. a must read!
Read more
12 people found this helpful
Report abuse

Wife number 7
5.0 out of 5 stars Great read
Reviewed in the United Kingdom on October 12, 2017
Verified Purchase
I didn't read for many years and then read this even though I had seen the film. Of all the books that I have read, only this one has ever made me jump out of my skin. Love it. Atmospheric and thrilling.
Read more
9 people found this helpful
Report abuse

mark crosby
5.0 out of 5 stars Thrilling Chase!
Reviewed in the United Kingdom on February 10, 2015
Verified Purchase
It's World War 2 and a German agent working in Britain has succeeded in discovering one of the biggest
Secrets he'll find. Now he needs to escape and meet up with his rescuing U Boat off the coast of Scotland. Ruthless and determined nothing and no one can get in his way. It's up to a fledgling MI 5 with help from Scotland Yard to catch him. But they don't know what he looks like, where he's living or how he's reporting his information. All they know is a call sign. A needle in a haystack situation it maybe , will detective work and counter espionage be enough ? Great story ,tension built up nicely started to dislike the guy enormously found myself willing on the good guys. My hopes were dashed with theirs each time a plan failed and the agent slipped through their fingers! A great read and worthy best seller!
Read more
8 people found this helpful
Report abuse