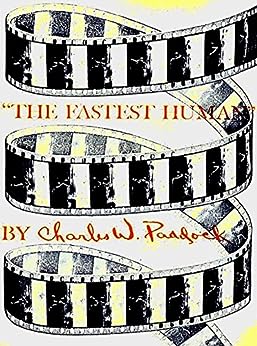 Marty
5.0 out of 5 stars If you liked "Chariots of Fire"
Reviewed in the United States on August 24, 2014
Verified Purchase
If you liked "Chariots of Fire", you will enjoy this book by one of the real- life competitors in the story, Charles Paddock. This is an autobiography by one of the great runners of the twentieth century giving insights into his upbringing, early years, his interest in running and the way in which he trained himself to be a champion. He applied his intelligence to augment his well-honed athletic skill at the running track. Adept at winning races by his wits, grit and sometimes raw determination, he set records which stood for decades. He set a good example of how someone who is exhausted, at times injured, seemingly has nothing left to give, finds an inner strength to make it to the finish line a fraction of a second ahead of the closest competitor. The reader will learn much about the history of twentieth century track stars and moments of high drama at the Olympics.
Read more
2 people found this helpful
Helpful
Report abuse

Rick H
4.0 out of 5 stars Fascinating time capsule
Reviewed in the United States on August 11, 2014
Verified Purchase
FIne book for running enthusiasts and sports historians, full of the real eye-witness verisimilitude that never comes across in a researched history of the past, One of the interesting revelations is that, while runners were as competitive then as now, character, teamwork, and good sportsmanship really were as prized as winning.

All history buffs will enjoy the clear look into California as it was in the early 20th century, when the megopolis was still wide open and Pasadena was still ranch land. The contemporary view of young men faced with World War I is interesting as well--as our grandparents keep trying to tell us, people were different then.

The narrative is at times a bit thick for modern readers used to shorter paragraphs and more scenes with dialogue, but the archaic style and language are worth the extra work.
Read more
2 people found this helpful
Helpful
Report abuse

nikki
5.0 out of 5 stars GREAT BOOK WOW
Reviewed in the United States on August 9, 2014
Verified Purchase
What a great book Charles paddock is awesome he is a part of our history
Read more
One person found this helpful
Helpful
Report abuse

Samuel Hawley
5.0 out of 5 stars A Highly Recommended Read
Reviewed in the United States on August 26, 2014
Charley Paddock was the “World’s Fastest Human” through most of the 1920s, until the title was seized by Vancouver’s Percy Williams (of whom I’ve written a biography, "I Just Ran: Percy Williams, World’s Fastest Human") and then Eddie Tolan. Of the three, Paddock was best suited for the role, at home in the spotlight and a consummate showman. He would turn up at track meets in turquoise or burgundy or powder blue gear and could usually be counted on to set some sort of record. The fastest 175 yards? Paddock set that. The fastest 90 or 125? Paddock again. The crowds loved it. On one memorable afternoon in April 1921, he managed to set four records in one afternoon—three of them in a single race, sprinting through a succession of tapes. It was that spring that sportswriters dubbed him the “Fastest Human.”

"The Fastest Human" is Paddock’s own story, originally published in 1932 and reissued here by the Paddock Family Estate after being largely unobtainable for decades. It is an autobiography but written in the third person to disguise the fact that Paddock was writing for money about running—strictly against the draconian rules of amateur athletics back in the day. It is an engaging account of Paddock’s early life and career as an elite sprinter and is filled with entertaining stories both on and off the track, featuring the names of sprint greats like Jackson Scholz, Harold Abrahams, Eric Liddell, Loren Murchison and Chester Bowman. (The quest for the 100- and 200-meter gold medals at the 1924 Paris Olympics—Paddock took silver in the 200—is the subject of the film "Chariots of Fire," winner of the Best Picture Oscar in 1981.) It also provides an eye-opening glimpse into how shabbily amateur athletes were treated in the 1920s, effectively held prisoner by the Amateur Athletic Union (AAU) with its rules against “professionalism.”

Paddock chafed against these strictures throughout his running career. He felt it was profoundly unjust that star amateur athletes should get only a cheap medal while meet promoters and the AAU raked in large sums. And so he made the most of his fame—and got barred from competition on more than one occasion. But he always came back. And when the reporters clustered around, hungry for comments, Paddock could usually be relied on for something highly suggestive. Something like: Another year of this amateur running and I can retire!

SimplySimple
5.0 out of 5 stars Eye opening look into the past
Reviewed in the United States on September 29, 2014
I've got to say, this book was fascinating on a couple of levels. First of all, the story itself is so compelling. If you've ever seen the movie "Chariots of Fire," you already know a bit about Charles Paddock. But this book gives an extra insight that's just so rare. It's written in the third person, even though Paddock himself is writing it. That allows for a different kind of narrative that you just don't see in this day and age. Also, California history buffs are in for a treat. There's so much to this book that makes it worth reading.
Read more
One person found this helpful
Helpful
Report abuse

tom mcnab
5.0 out of 5 stars Five Stars
Reviewed in the United Kingdom on June 11, 2018
Verified Purchase
Excellent account of the life of a great sprinter.
Read more
Report abuse
See all reviews
Back to top
Get to Know Us
Make Money with Us
Amazon Payment Products
Let Us Help You
EnglishChoose a language for shopping. United StatesChoose a country/region for shopping.
© 1996-2021, Amazon.com, Inc. or its affiliates