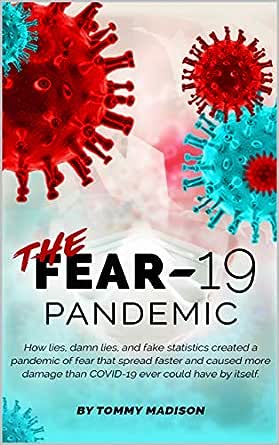 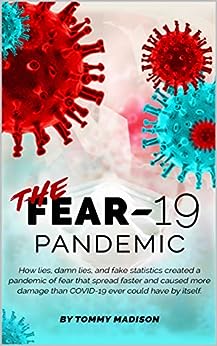 The FEAR-19 Pandemic: How lies, damn lies, and fake statistics created a pandemic of fear that spread faster and created more damage than COVID-19 ever could have by itself. Kindle Edition

Amazon Customer
5.0 out of 5 stars A very important collection of facts and quotes
Reviewed in the United States on October 2, 2020
Verified Purchase
I was very pleasantly surprised that this book includes a short note on the Diamond Princess quarantine results. The final data are on Wikipedia and in several scientific publications. The take-home message is a bit different than what Tommy Madison presents. On the ship, there were 3,711 people crowded more than residents of Hong Kong for more than two weeks (some for a month). The average age of the passengers was 68, and of the crew – 38 years old. No masks, no social distancing, no handwashing for many days. Only 696 (18% of 3,711) were positive in the RT PCR test for the virus, meaning 82% had some immunity that rejected the virus. Most probably, these persons had a previous infection with other coronaviruses that cause common cold symptoms.

What is a COVID-19 case? In infectious diseases, a case is a patient with symptoms reporting to a doctor or a hospital. In newspeak, is a person testing positive for SARS-CoV-2 RNA in one of the over 100 molecular tests that received an Emergency Use Authorization from the FDA. It is well documented that 90% of the positive results in molecular tests may be false-positive.

My take is that all the COVID-19 from the name of the virus (it should be named by the place it was found) to the statistics is damned lying only. The cases are only positive test results that may be 90% false-positives. The people with symptoms are tested by a molecular test for only one virus despite the fact that several different viruses and bacteria may cause these symptoms. The death count is based again on molecular test results and maybe 90% false-positive.

The best term that is adequate for what we see is “Casedemic.”
Read more
One person found this helpful
Helpful
Comment Report abuse

Gregory Lee Jones, MD
5.0 out of 5 stars The truth about coronavirus 2019
Reviewed in the United States on August 5, 2020
Verified Purchase
This book is a well written and easily understandable exposé of why the pandemic should have never been used for political reasons. It clearly explains how the political connection came to be. The data is real and the conclusions are meaningful. I would definitely recommend this book to all Americans and maybe for different reasons to all of the people in the world.
Read more
3 people found this helpful
Helpful
Comment Report abuse

Marcia Roby
5.0 out of 5 stars I think this book is fair to all sides.
Reviewed in the United States on June 24, 2020
I thought the book was going to be biased one way or the other. I did not find that true. It has a lot of stats and I am not a stat girl but they were interesting even to me. I appreciated someone else doing the hard work of pulling it all together! Enjoy.
Read more
5 people found this helpful
Helpful
Comment Report abuse

Kindle Customer
5.0 out of 5 stars It’s about time for the truth
Reviewed in the United States on July 17, 2020
Loved that every statistic, every number in this book was backed up with the original source. Thrilled to learn that the author is not a Trump fan, but look to the facts to fairly investigate whether the American public is getting the truth about COVID-19 and whether an across the board shelter in place policy coupled with a massive shut down of our economy smart, necessary or misguided. A MUST READ!
Read more
3 people found this helpful
Helpful
Comment Report abuse

Sherry Salfai
5.0 out of 5 stars Great Information
Reviewed in the United States on August 18, 2020
I suggest that America read this book.So much good information and the resources to back it up. I have believed this for a long time but didn’t have any evidence. Thank you for providing that!
Read more
3 people found this helpful
Helpful
Comment Report abuse

Deborah R. Habash
5.0 out of 5 stars Very Thought Provoking!
Reviewed in the United States on September 18, 2020
In a time where many of us KNOW that we are being played, this book offers refreshing statistics in an easy-to-understand format. Many of us have not taken what the news tells us for face value in a very long time. This book definitely explains why we haven’t.
Read more
2 people found this helpful
Helpful
Comment Report abuse

Anne
5.0 out of 5 stars Do yourself a favor, read this.
Reviewed in the United States on July 25, 2020
Fact-based, straight-forward common sense. Refreshing in the current political climate.
I encourage everyone to read this with an open mind, but read it.
Read more
3 people found this helpful
Helpful
Comment Report abuse

Bartok Kinski
4.0 out of 5 stars The best
Reviewed in the United States on September 20, 2020
I basically puked after I read it.
Read more
One person found this helpful
Helpful
Comment Report abuse
See all reviews

Alistair Meney
5.0 out of 5 stars Brilliant exposé of the covid-19 hysteria
Reviewed in the United Kingdom on June 16, 2020
Verified Purchase
Wonderful, a masterful exposé of all the media bullshit and quack medical drivel fabricating a fake crisis. The only crisis is the response by governments, happy to destroy their countries economies by taking at face value the advice of the usual fake, so-called experts, mostly wanked-out academics desperate for a few minutes of fame. Here in the UK the experts have been well and truly rumbled, but we still see the same old quack GPs wheeled out on TV spouting the usual unscientific drivel. Bad news for all the left-wing loonies, instagram virtue-signalling twats (mostly vegan and climate change nutcases) and idiots spouting rubbish on Twatter and Friendface. Simply the best book I’ve read in a long time.
Read more
2 people found this helpful
Report abuse
See all reviews