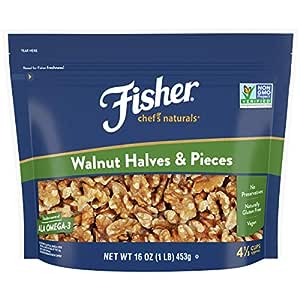 Save 15% when you receive 5 or more products in one auto-delivery to one address. Currently, you'll save 5% on your Dec 27 delivery.

Save 15% when you receive 5 or more products in one auto-delivery to one address. Currently, you'll save 5% on your Dec 27 delivery.

3. Stuff the potatoes: Split the potatoes in half lengthwise and scoop out some of the flesh. Arrange the potato halves on a baking sheet. Mash the potato flesh in a medium bowl with a potato masher. Stir in ¼ cup cheddar cheese, cream, salt and ¾ cup walnuts. Taste for seasoning. The walnuts are a great textural contrast from the potato. Spoon the filling back into each potato half and top with the rest of the cheddar cheese. Bake until the cheese browns and the potatoes are hot in the center, about 15-20 minutes.

4. Cook the bacon: Meanwhile, place the bacon in a medium skillet with ¼ cup water. Bring the water to a simmer and cook the bacon over medium heat until it completely evaporates and the bacon gets crispy, 12-15 minutes. Set aside.

5. Make the topping: In a medium bowl, stir together the garlic, lemon zest, remaining 1 tbsp. olive oil, salt, tomatoes, parsley and the remaining ½ cup walnuts. Taste for seasoning. Top each potato with the bacon, a drizzle of the bacon grease and then the topping. Arrange on a platter and serve immediately.

FISHER Chef's Naturals Walnut Halves & Pieces, Non-GMO, 16 ozFisher really goes nuts for fresh ideas in the kitchen, and we know you do too! So when cooking, replace ordinary with surprise. Experiment, improvise. Then enjoy the best part…sharing your delicious discovery with family and friends.Fisher recipe raw nuts are a wonderful way to add flavor and texture to any dish without adding preservatives. All of our recipe nuts are Non-GMO Project Verified and contain No Preservatives. Most Fisher Chef’s Naturals walnuts, pecans, and almonds are even certified by the American Heart Association.Freshness Tip: To keep fresh longer, store in freezer or refrigerator American Heart Association Heart-Check certification does not apply to recipes or other information unless expressly stated. For more information, visit heartcheck.org.Find an unexpected crunch at fishernuts.com

To keep fresh longer, store in freezer or refrigerator.

4.8 out of 5 stars
4.8 out of 5
2,094 global ratings
How are ratings calculated?
To calculate the overall star rating and percentage breakdown by star, we don’t use a simple average. Instead, our system considers things like how recent a review is and if the reviewer bought the item on Amazon. It also analyzes reviews to verify trustworthiness.

kane
3.0 out of 5 stars Disappointed experience
Reviewed in the United States on October 30, 2018
Flavor Name: HalvesSize: 16 Ounce (Pack of 1)Verified Purchase
This is the second time to buy this product. However, this product made me feel broken! As shown in the picture, these comminuted walnuts make me feel a headache! Such a powdered walnut. This disappoints me.2 packages are good and 2 packages are completely shredded.
Read more

kevinfTop Contributor: Pets
5.0 out of 5 stars Good flavor and freshness
Reviewed in the United States on April 21, 2020
Flavor Name: HalvesSize: 16 Ounce (Pack of 1)Verified Purchase
I bought the Fisher Chef's Naturals Walnut Halves & Pieces, 16 oz... I bought in bulk because I know I'll use them and Fisher walnuts always have a good flavor to me. I buy walnuts alot and the biggest problem I have with buying nuts in bulk like this is that you expect no shell pieces and few manufacturers can deliver that in my opinion. Few things worse than munching on some walnuts only to find there's a tiny shell piece in there. I've never had that problem with Fischer brand... Good flavor and freshness with a resealable pouch.
Read more
6 people found this helpful
Helpful
Comment Report abuse

CharMar B
5.0 out of 5 stars Nom! Nom! Nom! Squirrels love them!
Reviewed in the United States on June 18, 2019
Flavor Name: HalvesSize: 16 Ounce (Pack of 1)Verified Purchase
They're for the squirrels. Never met one that didn't love a walnut!
Read more

TJH Fiddler
5.0 out of 5 stars These are a great product
Reviewed in the United States on May 8, 2020
Flavor Name: HalvesSize: 16 Ounce (Pack of 1)Verified Purchase
Items like this seem to be quite expensive in our area. This was a very competitive price here on Amazon, so we simply purchased here. The product arrived fresh and tasty and we are told they are great brain food, by nutritionists, therefore we plan to eat them often. We like them straight out of the package, in our cooking, such as banana, zucchini or carrot cakes/bread, and sprinkled over ice cream in ice cream sundaes. They also mix nicely into home made trail mixes.
Read more
5 people found this helpful
Helpful
Comment Report abuse

Deb M, Mililani
3.0 out of 5 stars Shipping needs to be improved
Reviewed in the United States on April 22, 2020
Flavor Name: HalvesSize: 16 Ounce (Pack of 1)Verified Purchase
These are no doubt great walnuts. My peeve with these is the way they were shipped. Amazon shipped in a bubble envelope. This doesn't protect the nuts. The millions of pieces of mail that has been sitting on my package proves it. It looks like it's been used as a hacky sack. While the majority of the nuts are intact, I have a lot of "powdered" walnut too which is unfortunate, but still has to be included as part of my rating.
Read more
3 people found this helpful
Helpful
Comment Report abuse

Karmalitta
5.0 out of 5 stars Wow!
Reviewed in the United States on September 19, 2019
Flavor Name: HalvesSize: 16 Ounce (Pack of 1)Verified Purchase
I'm so used to buying nuts in the grocery store and of course they are usually dark in color and somewhat bitter to eat as a snack so I use them just to bake. When I opened this package I was totally amazed. The nuts were very light colored and smelled good. The taste was as impressive as the look. They make a good snack. If you're looking for a quality product, this is it.
Read more
3 people found this helpful
Helpful
Comment Report abuse

Henry Guinn
5.0 out of 5 stars Great Walnuts at a Great Price
Reviewed in the United States on September 24, 2017
Flavor Name: HalvesSize: 16 Ounce (Pack of 1)Verified Purchase
These are very good walnuts at a fantastic price. They are comparable in quality to or better than what I could buy at the store. They cost about half what I would pay there. So It allow me to use walnuts more for snacking or in cooking. I have discovered the joys of dipping these walnuts in a bit of good honey. Great snack and great for cooking. I would recommend them highly. I have already ordered my second bag.
Read more
4 people found this helpful
Helpful
Comment Report abuse

lizardwitch
VINE VOICE
5.0 out of 5 stars Fresh, a lot in bag
Reviewed in the United States on December 4, 2019
Flavor Name: HalvesSize: 16 Ounce (Pack of 1)Verified Purchase
The bags I have gotten have been fresh and have a good walnut taste. Not mealy and not a bunch of crumb sized stuff in bags. Actually, I was surprised that the price was relatively low for the amount I got. I had been ordering the black walnuts which are great & really strong but decided to switch over. These walnuts can be used in so many things..Cooking, salads, holiday stuff..Just eating out of hand for yr health..or when you find you didn't hide them well enough! :)
Read more
One person found this helpful
Helpful
Comment Report abuse
See all reviews

Page 1 of 1 Start overPage 1 of 1
This shopping feature will continue to load items when the Enter key is pressed. In order to navigate out of this carousel please use your heading shortcut key to navigate to the next or previous heading.
Back
Next
Pages with related products. See and discover other items: heart healthy nuts, best healthy snacks, pecan nuts, Best pecan pieces for baking, Healthy Snack Mixes, Raw Nut Butters