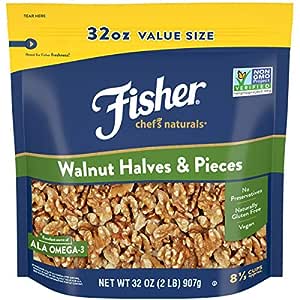 Save 15% when you receive 5 or more products in one auto-delivery to one address. Currently, you'll save 5% on your Feb 26 delivery.

Save 15% when you receive 5 or more products in one auto-delivery to one address. Currently, you'll save 5% on your Feb 26 delivery.

3. Stuff the potatoes: Split the potatoes in half lengthwise and scoop out some of the flesh. Arrange the potato halves on a baking sheet. Mash the potato flesh in a medium bowl with a potato masher. Stir in ¼ cup cheddar cheese, cream, salt and ¾ cup walnuts. Taste for seasoning. The walnuts are a great textural contrast from the potato. Spoon the filling back into each potato half and top with the rest of the cheddar cheese. Bake until the cheese browns and the potatoes are hot in the center, about 15-20 minutes.

4. Cook the bacon: Meanwhile, place the bacon in a medium skillet with ¼ cup water. Bring the water to a simmer and cook the bacon over medium heat until it completely evaporates and the bacon gets crispy, 12-15 minutes. Set aside.

5. Make the topping: In a medium bowl, stir together the garlic, lemon zest, remaining 1 tbsp. olive oil, salt, tomatoes, parsley and the remaining ½ cup walnuts. Taste for seasoning. Top each potato with the bacon, a drizzle of the bacon grease and then the topping. Arrange on a platter and serve immediately.

FISHER Chef's Naturals Walnut Halves & Pieces, Non-GMO, 32 ozFisher really goes nuts for fresh ideas in the kitchen, and we know you do too! So when cooking, replace ordinary with surprise. Experiment, improvise. Then enjoy the best part sharing your delicious discovery with family and friends.Fisher recipe raw nuts are a wonderful way to add flavor and texture to any dish without adding preservatives. All of our recipe nuts are Non-GMO Project Verified and contain No Preservatives. Most Fisher Chef’s Naturals walnuts, pecans, and almonds are even certified by the American Heart Association .Freshness Tip: To keep fresh longer, store in freezer or refrigerator American Heart Association Heart-Check certification does not apply to recipes or other information unless expressly stated. For more information, visit heartcheck.org.Find an unexpected crunch at fishernuts.com

To keep fresh longer, store in freezer or refrigerator.

4.8 out of 5 stars
4.8 out of 5
10,394 global ratings
How are ratings calculated?
To calculate the overall star rating and percentage breakdown by star, we don’t use a simple average. Instead, our system considers things like how recent a review is and if the reviewer bought the item on Amazon. It also analyzes reviews to verify trustworthiness.

Boho Bonnie
1.0 out of 5 stars Moth infestation!
Reviewed in the United States on September 2, 2018
Size: 32 OunceStyle: Halves & PiecesVerified Purchase
I love walnuts and these taste fine but as I got to the bottom of the bag (about a month after initially opening) I started to notice this stringy consistency at the bottom of the bag. Not knowing what it was I continued to pick out the walnut pieces and remove the stringy debris (which oddly continued to get worse & worse over the next few days). Then, codling moths started to appear all over the house. After doing some research I discovered that the moths lay eggs in walnuts and that's how they initially got into our house. That stringy texture - EGGS. I have never been more disgusted and have now been dealing with a codling moth infestation for over 6 months (even after removing the initial nest of eggs from the house). They have eaten my clothes. They have laid eggs everywhere. They are near impossible to get rid of. I will never bring another bag of walnuts into my house regardless of vendor or brand. Not worth the risk. Beware!
Read more
100 people found this helpful
Helpful
Report abuse

SoCADesertRat
1.0 out of 5 stars REPULSIVE - Terrible Experience
Reviewed in the United States on May 8, 2020
Size: 32 OunceStyle: Halves & PiecesVerified Purchase
Opened the bag 2 days ago and started to eat them. Best-buy date is 3/12/21. Today, day 2, the resealing system broke - so I had to transfer the nuts to a ziplock bag--Fortunately. In the bottom of the Fisher bag are rotting nuts and genuine SLIME. If the resealing band had not broken I would not have known about the slime and would have continued to eat the nuts until my fingers touched the slime!! How repulsive!!! Contacted Amazon and they are giving me a credit -- and no return on the slimy nuts. What would they do with this mess anyway? Attempted to send photos but the Amazon system would not let me upload them.
Read more
24 people found this helpful
Helpful
Report abuse

pleineluneTop Contributor: Pets
TOP 500 REVIEWER
1.0 out of 5 stars SWITCHED to ONE STAR and WHY
Reviewed in the United States on December 5, 2017
Size: 32 OunceStyle: Halves & PiecesVerified Purchase
EDIT: Last batches I have gotten of these were just not good, stale.

Switched to Happy Belly, which I can get here on Amazon as well. Taste much....fresher.

Walnuts are a staple for me. Use them almost daily in my oatmeal. BUT they're not cheap. I was getting Diamond Walnuts, but often they would taste stale and/or bitter, so I was searching for another.

Fisher's large size is a great price, they taste fresh and I have three bags delivered to my door each month.

VERY HAPPY and will keep buying as long as the price is right and I can get from Amazon.

Tracker
5.0 out of 5 stars Recommend without subscription
Reviewed in the United States on March 3, 2020
Size: 32 OunceStyle: Halves & PiecesVerified Purchase
These are very good and fresh. I use one bag a month so I subscribed so I would automatically get each month. I received the last ones Feb 6 and am out so I checked to see when the order would be shipped. To my dismay the month moved up to March 20th!! I thought I could change my delivery but IF I do I will NOT GET THE PROMISED DISCOUNT AND I HAVE TO PAY FOR SHIPPING!! What is the purpose of subscribing?? Very unhappy!
Read more
12 people found this helpful
Helpful
Report abuse

dianastasia
1.0 out of 5 stars Not fresh and my bird won't eat them.
Reviewed in the United States on May 28, 2018
Size: 10 Ounce (Pack of 1)Style: Halves & PiecesVerified Purchase
These walnuts do not look fresh they are almost white in color. My bird refuses to eat them.
Read more
29 people found this helpful
Helpful
Report abuse

kane
3.0 out of 5 stars Disappointed experience
Reviewed in the United States on October 30, 2018
Size: 16 Ounce (Pack of 1)Style: Halves & PiecesVerified Purchase
This is the second time to buy this product. However, this product made me feel broken! As shown in the picture, these comminuted walnuts make me feel a headache! Such a powdered walnut. This disappoints me.2 packages are good and 2 packages are completely shredded.
Read more

Lori L.
5.0 out of 5 stars Healthy, Yummy and Inexpensive = Win!
Reviewed in the United States on October 26, 2019
Size: 32 OunceStyle: Halves & PiecesVerified Purchase
I learned that walnuts are good for lowering blood pressure and a number of other healthy benefits because we are all about choosing something natural before a prescription. I read reviews of this brand. I didn't think they would be all that considering they are less expensive than some others. Holy moly! They are delicious!! What a yummy, healthy add to a side of rice or a salad or just eat them by the handful. 1/2 cup a day. I will definitely buy these again and again.
Read more
11 people found this helpful
Helpful
Report abuse

CharMar B
5.0 out of 5 stars Nom! Nom! Nom! Squirrels love them!
Reviewed in the United States on June 18, 2019
Size: 16 Ounce (Pack of 1)Style: Halves & PiecesVerified Purchase
They're for the squirrels. Never met one that didn't love a walnut!
Read more

Mohit Malhotra
3.0 out of 5 stars Taste not so fresh
Reviewed in Singapore on January 5, 2021
Size: 32 OunceStyle: Halves & PiecesVerified Purchase
Walnuts taste was not very fresh and, I guess that is why it was very reasonably priced.
Read more
Report abuse

Lynn
5.0 out of 5 stars Price is affordable
Reviewed in Singapore on March 23, 2020
Size: 32 OunceStyle: Halves & PiecesVerified Purchase
For leisure and also mix with my cereal.
Read more
Report abuse

Ravi Gupta
4.0 out of 5 stars Ok ok quality
Reviewed in Singapore on October 7, 2020
Size: 32 OunceStyle: Halves & PiecesVerified Purchase
Taste is ok and too many broken pieces are there.
Read more
Report abuse
See all reviews