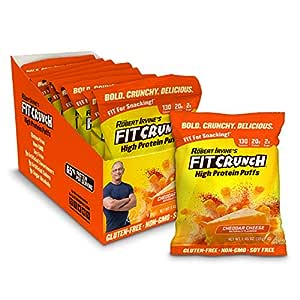 Visit the Fit Crunch Store
3.8 out of 5 stars 888 ratings
| 9 answered questions
Currently unavailable.
We don't know when or if this item will be back in stock.

Chef Irvine says, “There aren’t too many savory protein products on the market today. And being perfectly honest, what’s out there is awful. After working to develop a savory protein product of our own I learned why: it’s difficult! But with a lot of time in the kitchen and a whole lot of trial and error, I’m proud to say we made a major breakthrough. My new high-protein puffs make the perfect healthy snack for when you’re craving something salty and savory.

3.8 out of 5 stars
3.8 out of 5
888 global ratings
How are ratings calculated?
To calculate the overall star rating and percentage breakdown by star, we don’t use a simple average. Instead, our system considers things like how recent a review is and if the reviewer bought the item on Amazon. It also analyzes reviews to verify trustworthiness.

MDTop Contributor: Photography
2.0 out of 5 stars Didn't work for me
Reviewed in the United States on December 2, 2018
Color: Variety PackVerified Purchase
Well, this was a disappointment. Living on keto has meant giving up everything I was used to eating (but happily gaining health, and losing weight, nearly 30 pounds in 3 months), and, while I appreciate that folks out there are trying to make keto friendly approximations to carb infested foods, I've had to accept that most of these facsimile items just don't cut it. I have found some sweets that are pretty close, but stuff like crackers and breads and chips just are hard to replicate without carbs and most are a let down.

I gave these a shot, just missing old snack foods, and, while the nutrients and ingredients and macros get good marks, for sure (and I do appreciate any brand that tries to help us be healthy!), and the texture is nice and crispy, reminds me of a "real" cheese puff, I could not abide by the taste. :(

The "BBQ" just tasted like chemicals, very nasty chemicals. The sour cream and onion was massively overpowering, super salty and a poor imitation for flavoring, missing the mark. Not as bad as the BBQ, which were inedible, but certainly not a pleasant sour cream and onion flavor. The best was the cheese, which almost makes a palatable snack item, but there's just something off, that is unpleasant, for me. My brother didn't care for them either.

So, at day's end, it's a lot to pay for a tiny bag of not very decently tasting cheese ball substitutes. Might do in a pinch of cravings, but even the cheese ones, for me, didn't taste good enough to actually enjoy as a snack item. It more just reminded me of what I miss eating, haha, so that's not helpful. I'm coming to terms with just saying farewell to all those old goodies, but thought this was worth a try.

I can't recommend these, but everyone's tastes are different and I will say that the main issue of being a "healthy" snack food is found here. For me, they just didn't taste good enough to eat, so I will pass on buying them again.

Glad I could order the multi-flavor pack here, for less, considering I would have had to buy a much larger box of single flavor packages for more money, to try them elsewhere. This sampler pack is at least a good way to test the product.

Props to the maker for the nutrients, but, as others also said, the flavor really misses the mark.

Hank J. Brightman
3.0 out of 5 stars Great Product - Just Be Careful When You Crunch!
Reviewed in the United States on January 9, 2019
Color: Cheddar CheeseVerified Purchase
I've tried the puffs in each flavor and I like them very much. My only caution would be to be VERY careful when you crunch them. Regardless of which flavor you select, there appear to be little calcified deposits of protein that infrequently make their way into one or two of the puffs in the bag, and it is the equivalent of biting into a small stone. I've nearly cracked a tooth several times. I've sampled different batches of the product (and again, different flavors), so I'm not sure if it's a quality control issue, or an infrequent by-product, but you definitely want to tread (er, bite) lightly to be on the safe side. Otherwise, excellent, tasty and healthy product!
Read more
26 people found this helpful
Helpful
Comment Report abuse

CheekyMermaid
1.0 out of 5 stars Just don’t buy these...period!
Reviewed in the United States on November 4, 2018
Color: Cheddar CheeseVerified Purchase
These are the grossest things I think I’ve ever eaten. I can’t beleve how stupid I was to pay that much money for these. First of all, They are small title balls, so it’s hard to pick them out of the bag. Secondly, they are covered with so much cheesy like substance that it covers your finger (waaay worse than Cheetos or Jax). Yuk! And they are very salty with a chemically soy after taste.
Read more
22 people found this helpful
Helpful
Comment Report abuse

Mike Pucci
5.0 out of 5 stars versatile product
Reviewed in the United States on October 18, 2018
Color: Cheddar CheeseVerified Purchase
Love their new puffs! They are great by themselves or you can crush them up and put them on salads, or make healthy breaded chicken recipes with them!
Read more

Kathleen M.
5.0 out of 5 stars The answer to my prayers!
Reviewed in the United States on January 12, 2019
Color: Cheddar CheeseVerified Purchase
I don't have a sweet tooth. I have a savory tooth. The toughest thing about protein snacks is finding something savory that does not have a weird aftertaste. I've tried them all. But since I loved Robert Irvine's FitCrunch protein bars, I wanted to give these a try. They are fabulous. I've only tried the cheese flavored but I'll be ordering the variety pack to try BBQ and Sour Cream flavors. I'm doing carb cycling and these work great when you want a snack but have little carbs left in your daily macros. The puffs are small, but you get plenty of them. I'm online now because I ran out and need to order more.
Read more
12 people found this helpful
Helpful
Comment Report abuse

Lauren Klein
1.0 out of 5 stars There has to be a better way...
Reviewed in the United States on October 11, 2018
Color: Cheddar CheeseVerified Purchase
The taste was awful and had a terrible aftertaste. I do agree that the nutritionals are great but they are not worth struggling through having to actually eat them. The price is certainly not worth it at all. I would have expected more from a chef.
Read more
13 people found this helpful
Helpful
Comment Report abuse

noellejd
5.0 out of 5 stars Satisfies the crunchy cravings
Reviewed in the United States on June 11, 2020
Color: Jalapeno CheddarVerified Purchase
My partner loves Cheesy Poofs and keeps a tub around the house most of the time. As a low-carber I was looking for a snack that can prevent me from stealing his (I have a salty, crunchy weakness).
These do the trick. They're quite small but the benefit of that is eating them one by one keeps me crunching for longer. They're also more crunchy than those big Poofs, so again, a plus for the crunch craving.
The spicy flavor was a perfect amount of spicy, not too overpowering. The downside is that they're more expensive than I would like, but such is the life of a low carb snacker. At least they help get protein in!
Read more
2 people found this helpful
Helpful
Comment Report abuse

Jacob
5.0 out of 5 stars So tasty!
Reviewed in the United States on October 23, 2018
Color: Cheddar CheeseVerified Purchase
FitCrunch Protein Cheddar Puffs are a great anytime snack. And the best part about these is that I can use these both as a snack and post work out recovery meal in my salad. I will definitely be buying the Cheddar flavor again.
Read more

Page 1 of 1 Start overPage 1 of 1
This shopping feature will continue to load items when the Enter key is pressed. In order to navigate out of this carousel please use your heading shortcut key to navigate to the next or previous heading.
Back
Next
Pages with related products. See and discover other items: Keto Friendly Chips, erythritol sugar, Keto Artificial Sweeteners, Keto Chips, Low Carb Sugar Substitutes