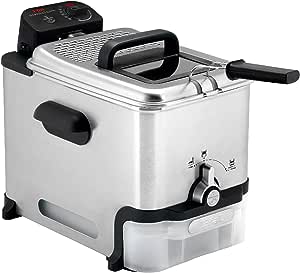 Visit the T-fal Store
4.6 out of 5 stars 9,852 ratings
Amazon's Choice recommends highly rated and well-priced products.
Amazon's Choice for "deep fryer with oil filtration & drain system"
Available at a lower price from other sellers that may not offer free Prime shipping.
See more

For warranty information about this product, please click here [PDF ]

4.6 out of 5 stars
4.6 out of 5
9,852 global ratings
How are ratings calculated?
To calculate the overall star rating and percentage breakdown by star, we don’t use a simple average. Instead, our system considers things like how recent a review is and if the reviewer bought the item on Amazon. It also analyzes reviews to verify trustworthiness.

Amazon Customer
1.0 out of 5 stars DIDN'T WORK
Reviewed in the United States on May 8, 2017
Style Name: Easy Clean Deep FryerVerified Purchase
I purchased this for my parents for Christmas as this was something they wanted. Once they finally tried it out after the holidays they couldn't get the oil to heat up over 300 degrees. I went over a few weeks later to give it a try and we made sure everything was connected, knobs were turned to where they needed to be and still could not get the oil to heat up over 300, we pulled out the cooking thermometer to check. We contacted T-fal and after a few calls have been told they need for us to send the item to them to inspect it and after they review it they will let us know if we will be able to get a new one or if they find nothing wrong with it they will return the item back to us. I explained we have not been able to use the item it is still under warranty that something is wrong we need a new one this one is faulty if it is not working the first time we tried it. We are still waiting on the results.
Read more
426 people found this helpful
Helpful
Report abuse

Chris
1.0 out of 5 stars Oil Spill - Buyer Beware
Reviewed in the United States on October 24, 2018
Style Name: Easy Clean Deep FryerVerified Purchase
I just missed the return window. After several uses, never had an issue. But last night after the oil cooled down and started draining into the lower basket, it had a hole or leak near the lever. We caught it when it leaked out 25% of the oil all over the kitchen cabinet, around the cook top, down the cabinet door, inside the cabinet and across the floor. We had oil all over the place and took an hour to clean up. I am not for sure if the plastic basket is designed for oil or why it started leaking. The basket has been empty for about a month as I recycled the old oil and added new oil last night to cook fries. Now I can't trust this device and will have to get a different model.
Read more
221 people found this helpful
Helpful
Report abuse

Jon Frey
4.0 out of 5 stars Super Product
Reviewed in the United States on July 5, 2018
Style Name: Easy Clean Deep FryerVerified Purchase
Ok, it would seem obvious that you should let the oil cool before turning it to auto-filter, so it is a good idea. Don't tilt the unit while it is filtering the oil...it will leak. Pretty darned good (or best) residential deep fat fryer available today. 1. All parts but the heating element are washable. This is a huge deal for fryers as over time and usage, the oil makes them nasty. 2. The design has no rubber gasket on the top to get clogged with oil and bits of food. 3.The food cooks perfectly at the correct heat. 4. The plastic oil container can be washed in the dishwasher heat. 5. You can cook with the lid on or off without problems (I cook with it off). 6. The price is in line with the product quality. I've had a number of fryers over the years and this is the best I've used.
Read more

Will Rosenthal
3.0 out of 5 stars Giant fryer with shallow available oil depth
Reviewed in the United States on April 26, 2017
Style Name: Easy Clean Deep FryerVerified Purchase
OK, this thing is HUGE. My issue for not paying attention to the measurements, but, sheesh! That reservoir adds quite a bit height.
The sad part is the cooking depth you have access to between the basket sitting on the heating element and the "max oil" line is pretty shallow--it barely covers an average sized breaded chicken drummette. That means that you are required to manually turn almost all items you fry. It also puts the heating element in direct contact with the fry basket and very close to your food which could result in even more uneven cooking. Also, the fry basket doesn't sit levelly on the heating element so the oil depth is even lower for items in the far end of the basket.

Heats up nicely, simple controls. The drain worked like a charm and made it very easy to clean out the accumulated crusty bits. I really like that you can clean the cooking chamber independently without worrying about getting electrical parts wet.

Dumping the filtered oil back in the chamber was OK. Can't tilt it too far or oil will come out the filter port. There is a recessed "ditch" in the top that caught the oil coming out the port, but still had to wipe down the top.

Overall, I wouldn't recommend purchasing this unless you absolutely hate dealing with dirty oil.

Callanish
1.0 out of 5 stars Failed after 1 year and a half. Customer service is Disreputable.
Reviewed in the United States on December 7, 2017
Style Name: Oil Less Air FryerVerified Purchase
Update. Mine failed little less than after a year and a half. Fortunately I took out an extended warranty, so I ended up buying a replacement. Here's why I went from 5 stars to 1 star. Customer service. I received the new one and the top part was really flimsy in staying in place, so I took it off and looked at it more closely. Turns out the plastic locking mechanism that keeps it in place had broken off, so rather than go to the hassle of sending it back, I contacted T-Fal hoping that because I just got it, they would just send me a replacement top. They sent me a reply email that really ticked me off. They said I had a discontinued model which isn't true. The FZ7002 is actually the same FZ700251 model sold by TFAL and it states FZ700251 on the box, so they are full of it in not knowing what they're actually selling on Amazon and they are using an excuse that the dealer isn't reputable to avoid a warranty issue, even though the product was fulfilled by Amazon. Point is, say you have a warranty issue, and you send them the invoice showing it was purchased from Amazon. They are going to see that it says FZ7002 and make an excuse that it's a discontinued product, even though the product model number is actually FZ700251. That's the kind of situation that makes me want to send the product back and go with a competitor, because the only reason I haven't is the old one that failed me due to the heating element still had a perfectly working top that fitted into the new one. If I didn't like the product, it would be getting shipped back today, but I'm going to sleep on it. Not going to reward a company that will say anything to avoid addressing a warranty issue from a product that was only purchased one week ago. Fortunately I took out an extended warranty with this one as well. Just be warned of my experience, and yes, this situation is enough to justify me dropping the product from 5 star to 1 star.

Owned this for 6 months now and it's made a huge difference in how I cook things now. I'm mostly cooking frozen food and for that alone, it's a huge convenience rather than having to turn on an oven and wait for it to heat up. Anything frozen from french bread pizza, to frozen wings, fries, etc all come out great. I also bought the small basket attachment that spins which helps with items that you can't use with the turning mechanism that works great with fries and wings. It's capable of so much more and when there's anything that requires getting re-heated and either choosing the microwave or the oven, I'll always use the t-fal for flavor and convenience and it's really easy to clean up as well. 5 star product.
Read more
140 people found this helpful
Helpful
Report abuse
See all reviews

Kip Home
1.0 out of 5 stars Great product but bad price!
Reviewed in Canada on October 20, 2020
Style Name: Easy Clean Deep FryerVerified Purchase
Love this fryer, great for small fry jobs and a breeze to clean. My problem with this is the price. Canadian Tire has this exact same model on for $159 everyday price. I paid 189 on PRIME DAY!?!? And Amazon doesn't price match. Buyer beware, you can get better prices elsewhere.
Read more
5 people found this helpful
Report abuse

J & E
3.0 out of 5 stars Great Deep Fryer. Smells like all the rest.
Reviewed in Canada on October 27, 2020
Style Name: Odorless Deep FryerVerified Purchase
Its a great little deep fryer. Heats up quickly, Maintains its heat quite well. Clean up is quite simple. Just don't be fooled by the way it is advertised. This deep-fried is not odorless. It smells the exact same as any other deep fryer you will purchase. I would still recommend it due to the fact that it is a very good compact deep fryer for home use.
Read more
4 people found this helpful
Report abuse

theskuj
5.0 out of 5 stars A "rice cooker" for fries
Reviewed in Canada on September 23, 2018
Style Name: Oil Less Air FryerVerified Purchase
I bought this to make fries. It does a decent job of that, if you make the proper preparations. 1 kilo of machine-fry-cut russet potatoes takes about 45 minutes to cook, and requires no intervention. What you're really paying for beyond a convection oven is the continuous stirring of the contents, which provides an even cook. Clean up is very easy. Personally, I see limited use beyond fries. Maybe some side vegetables.
Read more

5.0 out of 5 stars A "rice cooker" for fries
Reviewed in Canada on September 23, 2018
I bought this to make fries. It does a decent job of that, if you make the proper preparations. 1 kilo of machine-fry-cut russet potatoes takes about 45 minutes to cook, and requires no intervention. What you're really paying for beyond a convection oven is the continuous stirring of the contents, which provides an even cook. Clean up is very easy. Personally, I see limited use beyond fries. Maybe some side vegetables.
Images in this review