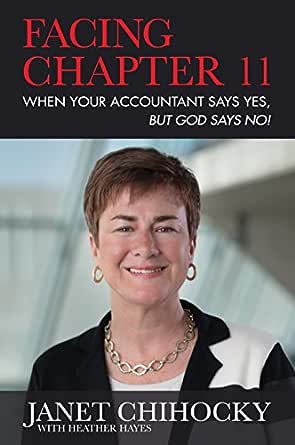 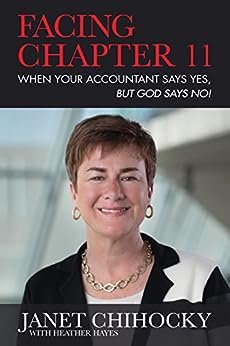 Facing Chapter 11: When Your Accountant Says Yes, But God Says No Kindle Edition

"Janet has made her unique story applicable to both women and men who want to take risks, insist on doing what is right and persevere, against any and all odds, in the pursuit of their greater purpose in life. Her book is captivating and a must-read for anyone who believes they were made for more." - General (Retired) Ann Dunwoody, the first female four-star general of the U.S. Armed Forces and author of A Higher Standard --General (Retired) Ann Dunwoody

"While we read some books to define leadership for us, Janet's story gives readers the imaginative experience of leadership on a successful mission." --Janet Greco, Ph.D. --This text refers to the paperback edition.

Janet Chihocky is the founder and CEO of JANSON, a successful communications, branding and analytics firm in Manassas, Virginia. Even as her career as a communications professional and small business owner has risen rapidly, fallen dramatically and then risen again to unparalleled success, she has leaned heavily on her faith in Christ and tried to seek His provision and guidance at each and every turn. Janet is a much sought-after speaker on such topics as brand positioning, market intelligence and strategic communications and serves as an advisor to both military leaders and civilian executives.Heather Hayes has been a writer and editor for 25 years. She has written more than 3,000 articles on such topics as business, travel, health care, the U.S. military, education, entertainment, technology and sports in publications that include The Washington Post, The Washington Times, USA Today, Destinations, Historic Traveler, Associated Press, Virginia Business, Washington Business Journal, Army Times and The Mid-Atlantic Thoroughbred. She served as final editor and proofreader for My Mother, My Son, by Dwayne J. Clark, 2012, and Blind in One Eye, by David R. Ford, 2010. She has received four Virginia Press Association Awards for outstanding business writing. --This text refers to the paperback edition.

Jeanette Rismiller
5.0 out of 5 stars No one need despair during a crisis
Reviewed in the United States on June 13, 2018
Verified Purchase
Janet's testimony during her most difficult crisis bares witness to the faithfulness of God when one surrenders and fully chooses to let go and let Him lead. This is an amazing story which will encourage and give hope regardless of the nature of the crisis. How God orchestrated each step in her journey is nothing short of incredible.
Read more
One person found this helpful
Helpful
Comment Report abuse

Amazon Customer
5.0 out of 5 stars Retired SFC US Army
Reviewed in the United States on October 30, 2018
Verified Purchase
Janet was so transparent and open in her book. She was sharing her conversations with God and the answers she received as well. Here book give me hope as a business women. This book was so good I purchased some for a group of ladies at my church. Janet book showed courage, and character which is 2 ingredients that you need in life and as a business person. I recommend that you get this book and shared is with family and friends so they can be delivered and set free.
Kathleen
Read more
Helpful
Comment Report abuse

Retired MSG
5.0 out of 5 stars Great story of maturing faith in action
Reviewed in the United States on June 13, 2018
Absolutely terrific book and great story of maturing faith in action. The account of Janet's journey will be an encouragement to anyone facing the hopelessness of possible financial ruin both in the business and personal realms of life. Her story is very well articulated and the highly personal nature of the dialog resonates deep within the heart and soul. While a great and uplifting read, this book is also applicable as a dynamic resource for small group study and discussion.
Read more
One person found this helpful
Helpful
Comment Report abuse

Jess
5.0 out of 5 stars Great Book with a Strong, Positive Message
Reviewed in the United States on June 24, 2018
Janet’s words transcend her own story to resonate with every person who reads this book and can relate to their own “Chapter 11” moment. This book was a great reminder to have faith in the path even if we don’t understand the timing or the reasons behind the curves in the road. This book was also a reminder that people come into our lives at a specific time for a reason much bigger than us.
Read more
Helpful
Comment Report abuse

MKB
5.0 out of 5 stars I could not put this book down
Reviewed in the United States on July 5, 2018
Facing Chapter 11 is well-written and flowed from chapter to chapter. It is an inspiring book that reinforces how the power of prayer combined with hard work and dedication can change your life for the better.
Read more
Helpful
Comment Report abuse

Laura, Arlington, Virginia
5.0 out of 5 stars Moving and inspiring - an excellent read!
Reviewed in the United States on October 31, 2018
Janet's story is a lesson of humility, resilience and faith. In a brisk and eminently readable book, we are brought through her Chapter 11 moment, and hopefully, have had our own faiths deepen along the way. Highly recommended!!
Read more
Helpful
Comment Report abuse
See all reviews from the United States