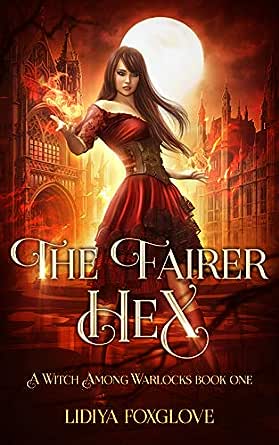 You've subscribed to A Witch Among Warlocks! We will preorder your items within 24 hours of when they become available. When new books are released, we'll charge your default payment method for the lowest price available during the pre-order period.
Update your device or payment method, cancel individual pre-orders or your subscription at
Your Memberships & Subscriptions
There was an error. We were unable to process your subscription due to an error. Please refresh and try again. 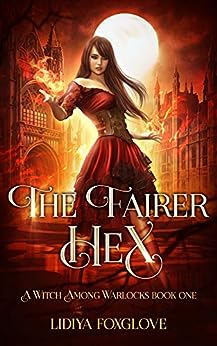 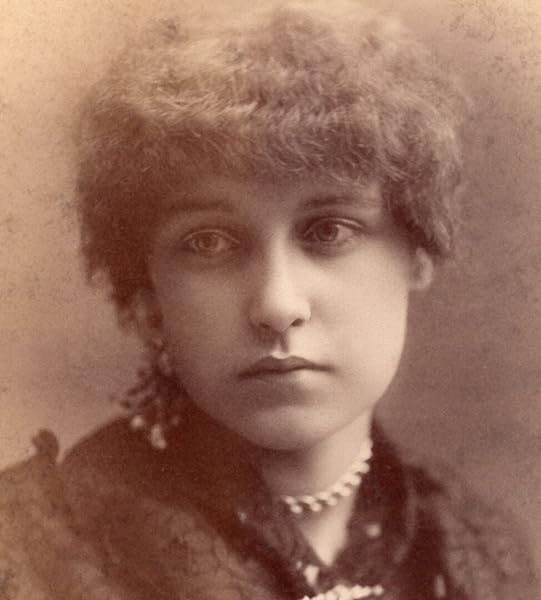 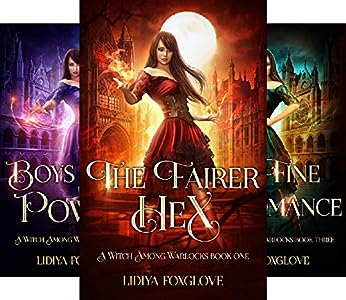 4.1 out of 5 stars
4.1 out of 5
165 global ratings
How are ratings calculated?
To calculate the overall star rating and percentage breakdown by star, we don’t use a simple average. Instead, our system considers things like how recent a review is and if the reviewer bought the item on Amazon. It also analyzes reviews to verify trustworthiness.
Top reviews

MitaMossBalls
2.0 out of 5 stars Weak.
Reviewed in the United States on April 3, 2019
Verified Purchase
While the storyline has an interesting premise, it is brought to ruin my immature dialogue, shallow characters and predictable outcomes. Altogether, this potentially strong story is a flop due to weak writing.
Read more
13 people found this helpful
Helpful
Comment Report abuse

Chris Shattuck-Weill
5.0 out of 5 stars Love this take on Witches and Warlocks!
Reviewed in the United States on March 16, 2019
Verified Purchase
This is an entertaining and imaginative take on the way of Witches and Warlocks plus other supernaturals. Poor Charlotte finds out shortly before she is to leave for Georgia University that not only is she a Witch but she has had a familiar staying in her backyard her whole life keeping her safe and oh Yeah, he is her gaming buddy from an online game she has been playing. Then, because of a mix up, she is to report to the Warlocks Academy where she is roommates with an incubus who is best friends with a vampire and the most popular, important boy at the Academy. I quite like Charlotte, she has a fun snarky outlook on life which she needs cuz the majority of the students and faculty really don't want her there. I was kept on the edge of my seat as mayhem and demons ensued. We are left on a cliffhanger and now need to get to book two to find out what happens. I recommend this series, it is a suspenseful, fun romance. Enjoy! 💚💜💛💙
Read more
4 people found this helpful
Helpful
Comment Report abuse

TipseyBookReviews
3.0 out of 5 stars Interesting world
Reviewed in the United States on March 18, 2019
Verified Purchase
Charlotte was an interesting MC. One day she finds out she is a wit h and her life is turned upside down. I liked that while she was powerful she didn’t just immediately have skills/control. I liked Alex, Firian, and Montague, but I’m on the fence about Harris, he did a couple things that really irritated me. At times I felt like the pacing was slow. I do think I will be looking to check out book 2, because I am intrigued by the world and characters.
Read more
3 people found this helpful
Helpful
Comment Report abuse

Rhaysha
4.0 out of 5 stars Great story potential
Reviewed in the United States on June 22, 2019
Verified Purchase
This book has a good story line and overall story arc, yes, there is a 'but'... The main character seems to be a hybrid, like the original version and then an amped up version that was written in later on. She vacillates between clueless and helpless to sassy and kickass with a speed that gives you whiplash. There are a few plot holes and concepts that are poorly introduced. I think with a good editor, this could be tightened up to a top notch book, but as it stands, I won't be continuing with the series.
Read more
2 people found this helpful
Helpful
Comment Report abuse

Tina
5.0 out of 5 stars The Fairer Hex
Reviewed in the United States on March 19, 2019
Verified Purchase
Plot twist upon plot twist kept this book charging forward at a nice steady pace, I enjoyed the unique storyline, which introduced wonderful protagonists with very interesting personalities. The story is just as playful as the blurb suggests. This is a fun read; I look forward to book 2.
Read more
2 people found this helpful
Helpful
Comment Report abuse

Ruby
2.0 out of 5 stars So disappointing for a Lidiya Foxglove book!
Reviewed in the United States on September 17, 2019
Verified Purchase
I've read many of her books and have not been disappointed in the interesting story or the sizzling sex scenes. In fact I've referred other author's failed attempts at writing reverse harem to Lidiya Foxglove to see how it's done. Imagine my surprise with the complete disappointment this book brought. It's not tantalizing enough to make me want to read the rest unless they end up free. I guess the author was trying to tease the readers and build up anticipation. Nobody likes a cock tease! I'm not interested in reading the rest.
Read more
Helpful
Comment Report abuse

ObsidianAsh
4.0 out of 5 stars I liked it
Reviewed in the United States on March 16, 2019
Verified Purchase
Na. Paranormal. Mystery/Suspense. Rh. 4 guys. Multi POV Magical Academy setting. They do NOT have a insta bond. I would love to hit a few in the head with a shoe. Charlotte finds out she's half witch and has been excepted to a prestigious all boys school for warlocks. A incubus that's spelled not to touch her, a newbie vampire that has flash back memories of his lord, a not so new fox familiar, and a miserable warlock prince. Sounds fun right?
Read more
Helpful
Comment Report abuse

Lisa
5.0 out of 5 stars Enjoyable & Edging on Steamy
Reviewed in the United States on May 10, 2020
Verified Purchase
If you're a fan of urban fantasy with a mix of young adult elements paired with a hint of sex then this is for you. It's an easy read, maybe 3-4 hours but it flies and its intriguing. It's unique enough that you can sink your teeth on and create your own movie in your mind while reading while being eager for more. The ending was a little bit of a let down but I'm in intrigued enough to read the next one in the series.
Read more
Helpful
Comment Report abuse
See all reviews

loopylou124
4.0 out of 5 stars Good premise
Reviewed in the United Kingdom on November 2, 2019
Verified Purchase
I read and listened to this book, switching between audio and reading. I must admit, I struggled with the audio version, as I am British, and the southern American accent is really annoying to me. I found the premise good, and the first chapter really caught my attention. Charlotte is a really likeable character.

I found initially her finding out to be a witch all a bit rushed. She totally accepts it, in a world when she didn’t know it existed before. This to me felt rushed and contrived. I wanted a bit more shock factor. The story runs quick, and so kept me very interested throughout. However, I felt a fair few dramatic scenes were skimmed over and lacked build up and suspense.

It was very top heavy with dialogue - which I usually like. But I did feel at points some scenes weren’t described as much as I liked.

So I don’t really like RH, and I really want to find one I do, but I just don’t get excited by 4 boys liking one person and who accept each other. I much prefer them fighting over each other to have someone. But that is just me. So this is just a preference thing, and nothing to do with the writing. The boys are actually really nice. Alec was my fave, anyone you can’t touch is always the sexist.

Overall, I liked the fast paced story line, some people said they found it confusing, but it definitely wasn’t - I like books that have big and complex plots. Charlotte as a protagonist is good, and the boys all have good back stories. I am not a big fan of changing POV. And overall I struggled with the audio version with the the strong southern American accent, but I did enjoy this book all the same.

Bee
5.0 out of 5 stars LOVED IT!
Reviewed in the United Kingdom on May 8, 2019
Verified Purchase
Seriously this book was bloody awesome, completely unexpected and loved it for it!
I loved the pace, the whole concept, especially that familiar part 😉👍 and I especially, like really fell in love with the authors wit and banter throughout the whole book, it seriously cracked me up 🙈😂
This is the first book I've read from this author and I deffo recommend checking out her books cause she is an awesome writer and I'm sure I'm missing out on all her other books sooooooo cya! Off to continue drooling over her next creations 😂
Read more
One person found this helpful
Report abuse

Nikita
5.0 out of 5 stars Amazing!
Reviewed in the United Kingdom on March 15, 2019
Verified Purchase
I cannot recommend this book enough it really is brilliant and well worth the read! I easily fell in love with th characters and absolutely can not wait until the next one comes out which I'm hoping is very soon! I finished it in one sitting and now I wish I made it last a bit longer! Happy reading everyone! (seriously read it!)
Read more
2 people found this helpful
Report abuse

Pat W
5.0 out of 5 stars Outstanding
Reviewed in the United Kingdom on September 16, 2019
Verified Purchase
Wow what a read. I was gripped and hoping what powers she will have. The storyline was super. Looking forward to the next book
Read more
Report abuse

5Star
4.0 out of 5 stars Great start to series
Reviewed in Australia on September 18, 2019
Verified Purchase
Great start to the series. I was engaged from the beginning and loved the concept of a female going to Warlock school. Charlotte is a well written MC. She is real which I liked. She is cute and brave but also clumsy and nerdy. She was determined though and didn’t let the all the Warlocks stop her. Look forward to reading the next book. Glad this series is complete so I can stay on the adventure.
Read more
Report abuse
See all reviews