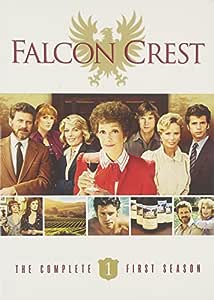 Nineteen eighty-two was a very good year for prime-time soaps. Dallas, in its fourth season, revealed who shot J.R., Dynasty heated up in its second season with the addition of Joan Collins, and Falcon Crest made its auspicious debut. Neither as wickedly fun nor campily over the top as its predecessors in its inaugural season, Falcon Crest added a touch of class to this genre of infinite guilty pleasures. The venerable Jane Wyman, a casting coup, stars as Angela Channing, the iron-willed matriarch who will stop at nothing to maintain her power as head of Falcon Crest Winery and the surrounding Tuscany Valley. Robert Foxworthy, not the snappiest grape on the vine, costars as Charles Gioberti, Angela's nephew, who inherits a share of the winery in the wake of his father Jason's death. He moves west to make a new life for his troubled family, including wife Maggie (Susan Sullivan), a freelance writer; hotheaded son Cole (William R. Moses), an aspiring archaeologist; and angsty teenaged daughter Vickie (Jamie Rose), especially unhappy in her new surroundings. "I can't breathe in that house," she complains to Cole in the episode "Dark Journey," just before running away to San Francisco, where she unwittingly becomes enthralled to a pornographer. Falcon Crest was referred to as "Dallas with grapes," but there is one key difference. Larry Hagman's J.R. took great and gleeful pleasure in plotting his rivals' downfalls. Angela is a tough old bird, but whether she's hiring Charles's disreputable former war buddy to sabotage his crop or undermining his campaign for the County Board, she seems to get no particular kick out of her machinations to drive Charles and family out of the valley. What she and Falcon Crest needed was a more formidable and equally cunning opponent. Enter David Selby as Richard Channing in season 2. Until then, we have Lorenzo Lamas as Angela's spoiled nephew and dangerously eager coconspirator and plenty of dark secrets and uncovered family skeletons to propel the season forward, principally Charles's growing suspicions that Angela isn't telling the truth about his father's death (well founded, as the audience knows from the pilot episode). One Very Special Episode features Lana Turner in her first screen role in more than a decade as Chase's mother. Anyone hoping for a Dynasty-esque catfight between Turner and Wyman will be disappointed, but the two screen legends are great verbal sparring partners. A special shout-out, too, to Chao-Li Chi as Chao-Li, Angela's very faithful butler and chauffeur, as well as Ana Alicia as Melissa, who livens things up as a scheming wine heiress who loves Cole but submits to an arranged marriage with Lance. Though it serves up some cheese with its wine, Falcon Crest has aged well, and its first season can be savored in episode sips or in one intoxicating gulp. --Donald Liebenson

4.5 out of 5 stars
4.5 out of 5
250 global ratings
How are ratings calculated?
To calculate the overall star rating and percentage breakdown by star, we don’t use a simple average. Instead, our system considers things like how recent a review is and if the reviewer bought the item on Amazon. It also analyzes reviews to verify trustworthiness.

KaseyG
5.0 out of 5 stars Addictive and Underrated Gem From the Heydey of Prime Time Soap Operas
Reviewed in the United States on September 18, 2013
Verified Purchase
More understated and sedate than "Dallas", yet miles more interesting and classy than the trashy, overindulgent "Dynasty", this inaugural season of "Falcon Crest" has it all: addictive storylines and solid performances that make for an enjoyable viewing experience. Favorite characters are the sane, sensible Maggie (Susan Sullivan), blonde good-guy Cole (Billy Moses), flighty Emma (Margaret Ladd) and swarthy bad-boy Lance (Lorenzo Lamas).

With "Waltons" creator Earl Hamner at the reigns, the series maintains a dignified ambiance that elevates it from its contemporaries. Later seasons would become more sudsy, but this one plays more like straight drama with soap opera elements thrown in. The picture quality could be better, but that just adds to the vintage flavor, like the fine wine that flows at Falcon Crest itself. A lot of the episodes have the original yellow closing Lorimar logo which really takes me back to the early '80s.

Robert R.
3.0 out of 5 stars Hang in there -- it gets better
Reviewed in the United States on May 29, 2010
Verified Purchase
UPDATE ABOUT FALCON CREST SEASON 2:

This DVD set for the second season of Falcon Crest isn't being distributed in the U.S. like the first set was, but is instead available RIGHT NOW at Warner Bros. wbshop dot com. Whoever's selling these out there online for ridiculously marked up prices is getting them there and reselling them. Presumably any future season collections will be sold the same way. Go to the site and order yours directly.

Falcon Crest was pitched to CBS (and bought by them) as something more like The Waltons than like Dallas/Dynasty. It was only after production started that CBS asked the creators of the show to move it in a Dallas-like direction to retain the audience that Dallas' lead-in on Friday nights gave them.

In addition, the first season of Falcon Crest coincided with a Hollywood writer's strike, and the producers found themselves rushing to cobble together formulaic/episodic scripts whose basic story could have appeared on any series, so the first half of episodes on the DVD are a mixed bag, and it's not until about the 11th or 12th episode that one can see the beginnings of the Falcon Crest we all came to know.

So while this first season DVD is okay (the Gioberti's [with the exception of Susan Sullivan] are dreadfully dull and have boring dialog), it's going to get better. It's also going to get a lot prettier, as in coming seasons the Spring Mountain Winery/Miravalle mansion in St. Helena, California where Falcon Crest was filmed will be better landscaped (cypress trees flanking the winery doors, 3-Tiered Waxleaf privets flanking the entrance to the mansion and Boston ferns hung along the porch, better cars, better characters [Philip Erikson, Richard Channing, and especially Ana-Alicia as Melissa Agretti],and so on).

So by all means buy this DVD, but don't judge Falcon Crest as a whole on its contents. It improves considerably.

Sadly there are some very overexposed outdoor scenes on this DVD that did not appear that way when first broadcast, and the setting, even more than the story, was responsible for a considerable amount of this series' appeal. I hope they improve this in coming season releases. It's a great shame that what was gorgeous and perfect gets a substandard treatment here at times.
Read more
6 people found this helpful
Helpful
Comment Report abuse

Moonglow
5.0 out of 5 stars Falcon Crest on DVD at last!
Reviewed in the United States on August 30, 2010
Verified Purchase
Wow, I was beginning to think I'd never see the day. But finally, Falcon Crest, my favorite prime-time soap of all time, is making it to DVD.

The cast of this show is tremendous - Jane Wyman is one of the most talented classic film stars to make the transition to prime time television, and she holds the audience of Falcon Crest spellbound as in season one, we only begin to realize the lengths to which Angela Channing will go to control the vineyards of Falcon Crest. This tough-as-nails character has some of the greatest lines ever uttered on a prime-time soap, and these (plus Wyman's brilliant portrayal) serve to set her up perfectly as 'The Queen of Mean'.

In season one Chase (Robert Foxworth), and to a lesser extent, Maggie (Susan Sullivan) are the chief 'good guy' thorns in Angela's side, but in season 2 the action really revs up with the arrival of Richard Channing (David Selby), who at least in his earlier seasons is in no way a 'good guy'... a fact which makes him a perfect adversary for Angela. Angela's partner in crime during the early part of the show is her spoiled nephew Lance (Lorenzo Lamas), but Lance has some problems of his own, in the form of his ongoing love/hate relationship with Melissa (Ana Alicia).

I hope the rest of the seasons will be quickly on the way. My old VHS tapes recorded from TV in the 1980's are well past their expiry date!
Read more
9 people found this helpful
Helpful
Comment Report abuse
See all reviews

Amazon Customer
5.0 out of 5 stars Excellent
Reviewed in the United Kingdom on October 18, 2018
Verified Purchase
Missed this when it first went out and on reruns, thank you for the opportunity to collect this series on dvd. Excellent.
Read more
One person found this helpful
Report abuse

Janet
5.0 out of 5 stars Falcon crest season 1
Reviewed in the United Kingdom on November 19, 2018
Verified Purchase
Good buy but not opened it as I realised I ordered the wrong 1. I already have it. My mistake.
Read more
Report abuse
See all reviews