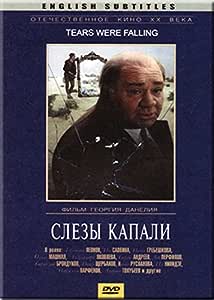 Georgi Daneliya, a brilliant director (I Step Through Moscow, Autumn Marathon, Kin-Dza-Dza). This film is spiritual, deeply. Like a lot of Daneliya's films, this one has a sub-title which is a "Sad Fairytale". But aside from that this film is about a normal man's life, who has a pretty boring job in city planning (tearing down and planning building projects), a supportive wife, a son who lives with them with his wife and daughter. The film starts with a narration of fairytale about an evil inventor who made a mirror, "in which everything that was kind and good disappeared, and everything that was bad and obscene was reflected and seemed even worse". The students of the evil professor did a lot of evil with the mirror and finally tried to get it up to heaven, but the mirror fell and shattered into millions of tiny pieces. The person in whose eye fell a piece of the mirror began to see in everything foolishness, and life for him became unbearable". That is my shot at a literal translation, being Russian. Credits roll and then our journey begins.