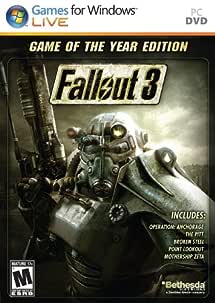 4.4 out of 5 stars
4.4 out of 5
553 global ratings
How are ratings calculated?
To calculate the overall star rating and percentage breakdown by star, we don’t use a simple average. Instead, our system considers things like how recent a review is and if the reviewer bought the item on Amazon. It also analyzes reviews to verify trustworthiness.

KazTop Contributor: Pets
5.0 out of 5 stars Simply just so much fun
Reviewed in the United States on November 18, 2017
Platform: PCEdition: Game of the YearVerified Purchase
Fallout 3 is one of the greatest games of all time.

I know that last sentence seems over the top, but I don't give praise like that lightly, so take it as the true endorsement it is. As a role-playing game Fallout 3 offers you a great deal of choice; who do you want to side with, what type of person is your character, how do you advance your abilities--all these and more are left to you. The story writing is excellent and there is an incredible amount of attention give even in the minutiae. You might find a remote home on the map with no connection to any quest or story in the game that still has a developed NPC (non-player character) who offers humor, sadness, or greater insight into the world of the game. Another strength of this game is the open-world design. While I am not always a fan of open-world games, this one, being set in Washington, DC, keeps things feeling fresh and interesting because of the richness of the locale. DC has such a wealth of famous landmarks, government buildings, military bases, and subway tunnels that you really feel like you are in post-apocalyptic America. The attention to detail with the Metro (subway) system in particular was downright eerie. On top of all of this the gameplay itself was fun and satisfying; there is the usual assortment of weapons, armor, companions, and abilities to keep things interesting.

There are, of course, some flaws. You will likely, at some point, find or do something that makes the game crash. Likewise, as the game is now older, you may have to tweak it to make it work correctly. But it will be completely worth it.

Overall this is a phenomenal game that you can easily, even with just playing the core stories, spend over a hundred hours playing. The story, setting, and variety of characters, abilities, and weapons makes this a ton of fun. Do yourself a favor and play Fallout 3.

S. Penatzer
5.0 out of 5 stars Fallout. Fallout never changes.
Reviewed in the United States on May 3, 2018
Platform: PCEdition: Game of the YearVerified Purchase
PC/ Xbox/ PS? doesn't matter. Great game. Bethesda took some flak when they bought the franchise, but this installment does a really good job of updating the 1997 "Fallout" to modern format. The design team did an excellent job thematically and aesthetically, and kept the lore of the original games very canonical. My favorite thing is how they took a 10+ year old (at that time) top-down PC strategy RPG and evolved it into a modern FPS while still maintaining the RPG feel. (I concede, it's "The Elder Scrolls" with guns, but it works). In fact, it made me dust off my old PC copy of #1 and I got hooked all over again. It did so well it revitalized and renewed an interest in a game I'd all but forgotten about, but more importantly, the transition between the two was practically seamless because they did such a fantastic job of translating the essence of the original into "Fallout 3". Yes, "Fallout: New Vegas" is probably the better game as any true Wastelander will tell you, but it wouldn't exist were it not for "Fallout 3" and what it accomplished.
Read more
Helpful
Comment Report abuse

L. Cerny
5.0 out of 5 stars This Dystopian Life
Reviewed in the United States on August 13, 2013
Platform: PCEdition: Game of the YearVerified Purchase
A large open-world FPS with an extensive amount of quests.

If you haven't played Fallout 3 or seen any of the trailers or gamer videos, you are in for a treat. Released in 2008, the story literally and figuratively begins with the birth of your character. After choosing your attributes, you experience, via growing older, a couple short scenarios in which you learn how to maneuver and use the controls. Then... WHAM... you are released into the vast post-apocalyptic landscape of the mid-Atlantic U.S.

You are given a main quest, and many, many side quests, which requires extensive walking and exploration throughout the territory. In order to complete quests, you must interact with NPCs, choosing which factions to support or fight against. In your personal menu, known as a PIP-boy, you will see how the different affiliations view your character, i.e., "Evil", "Good", or "Neutral". Found items can be cobbled together into weapons and ammo, and armor and weapons deteriorate with use, so you will have to replace them or increase your repair skill. Skills are increased by completing tasks or reading magazines, which provide a timed increase in the skill, or by reading books, which provide a permanent in crease in the skill.

How long the game takes to "finish" depends on how you like to play games. If you want to simply jet through the game, get it over with, then you could complete the main quest in a couple of days. If you're like me, and need to pick up every single item and walk every inch of the territory, then the game becomes never-ending - I've logged over 600 hours. You can always finish the game and restart, selecting different attributes and changing which factions you want to support; some achievements can only be accomplished this way.

The game is beautiful with immense detail, shading, perspective, and the scaling is incredible. At one point your character must climb atop a satellite relay station and walk across the upturned dish. Several of the tiles are missing and as my character peered through one of the gaps to the ground far below, I experienced vertigo.

Although futuristic, the game incorporates retro advertising, appliances, vehicles, and aesthetics from the 1950s, a source of irony as that was the era of the Cold War. The retro nature of the visuals also provides humor and charm - something lacking from most FPS games. There are also many references to movies, T.V. shows, and popular culture, such, The Iron Giant, The Jetsons, Star Trek, and Them! (the 1954 film)... and be on the lookout for wayward teddy bears.

I cannot gush enough about this game, but anymore information will simply detract from the experience of discovery. Yes, the graphics are a little dated, but the game is so well-developed that it is hard to believe that it is a mere video game and not a virtual world, such as, Second Life. (sigh) I wouldn't mind living there if I thought I could actually survive an attack by a Deathclaw.

Abhijith U.
5.0 out of 5 stars Delayed delivery, awesome game !!
Reviewed in India on June 17, 2015
Platform: PCEdition: Game of the YearVerified Purchase
Product received in excellent condition. The delivery did take 2 weeks time (it had to come from the US) but the wait was worth it. I have played Fallout-1 and Fallout-2, and now I am journeying through the wasteland again, and the journey has been awesome as expected. My one gripe is that the bundled 'Wasteland Survival Guide' is in French. :(
Read more
One person found this helpful
Report abuse