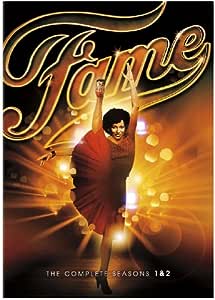 You want Fame? Timing is everything, and thanks no doubt to the 2009 feature-film remake, this high-spirited 1982 TV series is back in the spotlight where it belongs. Not as gritty as the 1980 cult classic, this more family-friendly Fame shares the original movie's lets-put-on-a-show exuberance and thrill of performance. It also shares some key original cast members, principally Emmy and Golden Globe-winner Debbie Allen as Lydia Grant, the demanding dance teacher at New York's prestigious School of the Arts. Albert Hague reprises his screen role as curmudgeonly music teacher Benjamin Shorofsky, as do the late Gene Anthony Ray as untrained dance sensation Leroy Johnson and Lee Curreri as musical prodigy Bruno Martelli. Though Zac and Miley-like fame eluded most of the cast members, their fledgling talents still shine. The most well-known is Lori Singer (Footloose) as new student Julie. Standouts in the ensemble include Erica Gimpel as diva Coco Hernandez (played by Irene Cara in the original film), Carlo Imperato as aspiring stand-up comedian Danny, Valerie Landsburg as spunky, wisecracking Doris Schwartz, and Carol Mayo Jenkins as the tough but compassionate English teacher Elizabeth Sherwood.

This set contains all 16 episodes from season 1 and 22 of 23 episodes from season 2 (the episode "The Kids from Fame in Concert" is missing in action). Fame is an irresistible mix of show-stopping musical numbers and After School Special issue-oriented melodrama. Episodes tackle such subjects as the Holocaust, death, divorce, censorship, and pre-marital sex. One of the benchmark episodes in this set is the four-time Emmy-nominated "Not in Kansas Anymore," a cleverly staged homage to The Wizard of Oz, complete with black-and-white prologue. Three show-business troupers are in their element here. Gwen Verdon guest stars in "Come One, Come All" as a faded musical star who takes over the school's Parents' Night show much to the displeasure of her resentful son. Art Carney adds stature to "A Big Finish" as the school janitor, a former Broadway hoofer, who is secretly hiding his homeless best friend (Ray Walston). Whether you're a child of the '80s or a contemporary fan of High School Musical, the release of Fame should fill you with Glee. --Donald Liebenson

4.7 out of 5 stars
4.7 out of 5
90 global ratings
How are ratings calculated?
To calculate the overall star rating and percentage breakdown by star, we don’t use a simple average. Instead, our system considers things like how recent a review is and if the reviewer bought the item on Amazon. It also analyzes reviews to verify trustworthiness.
Top reviews

Lynnette215
5.0 out of 5 stars Even better than the movie
Reviewed in the United States on April 28, 2020
Verified Purchase
Great movie made into a tv show.I loved it brought back so many memories.I saw the movie and didn't think it would be as good as the movie since Coco was played by Erica Gimpel instead of Irene Cara. I was so disappointed that Irene didn't reprise her role as Coco

I didn't like her version of singing Fame like Irene cara.i didn't think she would be as good as her or the show.i was so wrong not only the show was great I liked Erica Gimpel as Coco. Of course Irene's version of Fame is spectacular but Erica's version is cute.i can't wait until there's more seasons released.Gene Anthony Ray was great in the movie and TV shows and so is Debbie Allen.please release more..you all left me hanging😂
Read more
One person found this helpful
Helpful
Report abuse

DEWEY M.
5.0 out of 5 stars FAME TV SERIES: "GONNA LIVE FOREVER"
Reviewed in the United States on May 16, 2010
Verified Purchase
Two years after Alan Parker's original 1980 film, writer Christopher Gore successfully adapted the "Fame" format into a TV Series. The Series is toned down a bit from the film-- the students don't use profanity and Season 1 student Montgomery (P.R. Paul) is now heterosexual instead of homosexual. Minor changes aside, an episodic TV series is actually the better medium to follow the students at New York's School For The Performing Arts and their coming of age stories. When I was 16, I loved music, musical theatre, and performing arts; so Thursday nights at 8:00 pm, from 1982-1983, NBC was the place to be for "Fame." I watched Seasons 1 and 2 religiously.
Most "Fame" episodes are actually mini-musicals; which, I suppose, brings comparisons to the more recent "High School Musical" franchaise and "Glee." While I strongly doubt "High School Musical" or "Glee" will be fondly remembered in future, "Fame" holds up remarkably well. Most of the musical numbers are well integrated into the episodes and staged in an appropriate "performance" context at the school itself. A few take place in other locations, like a music store or New York deli. I vividly recall Debbie Allen (as spirited dance teacher Lydia Grant) and her students dancing exuberantly around the streets of New York City in a number titled "Body Language." I also recall the "Othello"- inspired number "Desdemona" from the Season 1 episode "The Strike." Not surprisingly, the series generated several successful TV Soundtrack Albums.
Albert Hague, Lee Currerri, and the late Gene Anthony Ray reprise their film roles as music teacher Mr, Shrovsky and students Bruno Martelli and Leroy Johnson, respectively. Other principal cast members include Erica Gimpel as Coco, Lori Singer as Julie, Valerie Landsburg as Doris, and Carlo Imperato as Danny. Dancers Stephanie E. Williams and Michael De Lorenzo are also prominently featured in several episodes. Michael De Lorenzo is also recognizable as one of the featured dancers in Michael Jackson's classic 1984 video "Beat It." Morgan Stevens joins the cast in Season 2 as drama teacher David Reardon, replacing Michael Thoma as Mr. Crandall. The death of Mr. Crandall, and the effect on his favorite student Danny, is acknowledged in the touching episode "A Touch Act To Follow." Many episodes deal with a mixture of conflict and compassion between students and teachers. Mr. Shrovsky has many battles with his headstrong student Bruno Martelli, and Lydia and English teacher Elizabeth Sherwood (excellently portrayed by Carol Mayo Jenkins) are often at odds over Leroy. Hot-headed, stubborn Leroy is a dynamic dancer and Lydia's most talented student. But he is also almost functionally illiterate; a matter of great concern to Sherwood. Indeed, "Fame" is not all happy songs and dances. Episodes address such topics as teen-age runaways, censorship, racism and other forms of prejudice, students and teachers with developmental and physical disabilities, death, and suicide. But my favorite "Fame" episode is Season 2: "Not In Kansas Anymore", a fun and inspired tribute to "The Wizard Of Oz," with Doris as Dorothy, Leroy, Bruno, and Danny as the Scarecrow, Tin Man, and Lion, Mr. Shrovsky as the Wizard, Lydia as Glinda, The Good Witch, and Miss Sherwood as the Wicked Witch. This episode includes a beautiful version of "Over The Rainbow," performed by Valerie Landsburg and Debbie Allen.
NBC cancelled "Fame" after Season 2, but the Series was quickly picked up in syndication and ran for three more years. I never saw the rest of the series and would love to! I hope the rest of the Series (Seasons 3-6) is soon made available on DVD; as "Fame" is extremely worthwhile and highly recommended!
Read more
16 people found this helpful
Helpful
Report abuse

The seller was super responsive and gave me a refund for the defective disks. Very happy with how it was resolved, Great seller! :) I updated my review to 5 stars. Thanks Amazing Wildcat!

See my video! There is something wrong with the quality of all these disks. The intro to the disk is fine, but once you get to the menus for the Fame everything goes blue. It's really intense. Maybe these are cheap reproductions? Both disks are the same blue. You can't even call it a blue cast, it is much more than that.

I wish I had checked them when I got them. They were bought months ago, but I didn't have a chance to view until later. Save your money!! Really hoping the seller offers to make it right. If so I'll change my review.
Read more
Helpful
Report abuse

T. Turner
5.0 out of 5 stars Brings Back the Memories
Reviewed in the United States on October 28, 2009
Verified Purchase
I am enjoying watching these episodes again. It brings back the early 80s in a big way. My friends and I would set aside Thurs. night as our Fame night. And I tell you, it's as good as it was back then. The episodes still deal with teen issues in a way that can be related to. Yes, it looks 80s. But if you weren't around, it's a way to see what it was like. Leg warmers, dancing, singing, feathered hair, and neon are some of the details you might have missed or never experienced. Welcome back to the early 80s, and enjoy a Fame fix. It's a great way to relax in the evening.
Read more
8 people found this helpful
Helpful
Report abuse

Gary J. Astorino
5.0 out of 5 stars Great follow up to movie
Reviewed in the United States on July 11, 2020
Verified Purchase
Show is pure 80s. Loved it. My niece a big fan of the original movie and wanted to see the series with many of the original cast. Made her day.
Read more
Helpful
Report abuse

Beekah Myce
5.0 out of 5 stars I Bought This Set as a Gift
Reviewed in the United States on December 30, 2020
Verified Purchase
I bought this set as a Christmas Gift for my older daughter. I hope that she enjoys it as much as the movie version.
Read more
Helpful
Report abuse

Laura
5.0 out of 5 stars Flashback
Reviewed in the United States on April 28, 2019
Verified Purchase
What wonderful memories this series brought back. The quality of the recording was great visually and pretty good with the audio. Well worth the money !
Read more
Helpful
Report abuse

ArtiztikFoto
5.0 out of 5 stars Waiting for Forever...
Reviewed in the United States on October 17, 2009
Verified Purchase
I'm greatful that the second season is finally released after all these years, but will the remaining 4 seasons follow soon? I understand music-driven shows require more time and expense to acquire the rights to the music, and there has to be enough market demand for the producers to make the investment. There have been many excellent series (American Dreams for one) where only a few seasons are released, and not the complete series. I do hope they release seasons 3 thru 6 promptly...it has been too long a wait. If you want the rest, please make this a top seller! Did you know Janet Jackson is in Season 4?
Read more
7 people found this helpful
Helpful
Report abuse
See all reviews

BJ
5.0 out of 5 stars The series
Reviewed in Canada on May 21, 2014
Verified Purchase
With having the cd and the series my daughter never gets bored of watching it. You can pick it up many times and never get sick of it. Really good series.
Read more
Report abuse
See all reviews