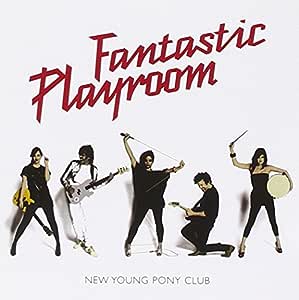 Debut album from the London five piece, fresh from the NME Nu-Rave tour having played with the likes of Klaxons and CSS. This electro pop album includes indie dancefloor hits 'The Bomb' and 'Get Lucky' as well as the insanely sexy and catchy 'Ice Cream', recognisable from Intel's recent TV campaign.

New Young Pony Club: new rave or new disco? Answer: who cares when their music sounds this good? The London quintet might be a new phenomenon to some, but others will know them well, as theyve been working hard behind the scenes for a good three years or so, building up a solid fan base to accommodate the release of this debut album. And what a debut it is. Fantastic Playroom ticks all the right "influence" boxes--Bowie, Blondie, New Order-to make it suitably zeitgeist-capturing, yet their tunes are infused with an extra savvy and edginess, putting them slightly ahead of the new whatever game. Singles like "Ice Cream" and "The Bomb" illustrate the bands way with a sexy rhythm; songs like the percussive "Hiding on the Staircase" keep the party going, while the bands 80s style synth-pop indulgences come unashamedly to the fore on "The Get Go" and "The Jerk." A large part of the bands appeal is vocalist Tahita Bulmer, whose slightly detached vocal delivery sits well on the bands songs. True, Fantastic Playroom can feel more like a collection of singles than a coherent album at times, but thats just what this band do best. We should love them for it. --Paul Sullivan

The_Lucas
5.0 out of 5 stars Fantastical
Reviewed in the United States on April 2, 2008
Verified Purchase
I can't get enough of this CD. I burned it to CD with Fancy Footwork
by Chromeo. I can't even begin to guess at how many times in a row I've listened to it, it took me a few listens to really get into it, but as with most CDs that happens. It is hard to describe the music...it's pop-y, catchy, and reminds me of the 80's. It is one of my most listened to CDs since I got a hold of The Essential Alice in Chains: Alice in Chains, The Faint, or Give Up: The Postal Service.

Donald E. GillilandTop Contributor: Rock Music
2.0 out of 5 stars Awfully Annoying
Reviewed in the United States on February 14, 2019
I heard a track by New Young Pony Club that I liked and when I saw a copy of their "The Optimist" CD at a shop in Kuala Lumpur I took a chance and bought it. Quite impressive. Sort of a cross between pop-dance and an edgy sort of retro new wave.

Liking my first exposure to the band I got this CD a few months later. Ugh. Hardly sounded like the same band. Inane lyrics and vapid dance beats, and songs that were clearly not well written. This album was so annoying I couldn't get past two complete listens, which is very rare for me. But when confronted with an album as annoying and pointless as this one, why waste my time?

Benjamin Norman
3.0 out of 5 stars Really 3 1/2 stars!
Reviewed in the United States on January 7, 2008
The New Young Pony Club is one of many bands that are embracing the sound of Disco Rock. With groups like Maroon 5 taking it mainstream, smaller, more dance-oriented acts can fully flesh out that sound without fear. NYPC hails from London (but has a huge following in Australia, where they are signed to Modular Records), and has toured with Lily Allen, CSS, and the Klaxons, to name a few. Some might call their sound New Rave, but I much prefer my own labeling.

Fantastic Playroom, NYCP's debut album, is a romper room of fun and danceable beats. Singer Tahita Bulmer's voice sounds more like Imperial Teen (i.e. frequently out of tune) than Sarah Brightman, but this isn't really a bad thing in this case. Sometimes the more technically correct a vocalist sings, the less accessible they are.

"Get Lucky" opens the album, a groovy number about, gasp!, getting lucky! This song reminds me of Peaches, without the vulgarity. "Hiding on the Staircase" is the next track, and the one that stands out the most on the album. It is very different from the disco rock sound that is featured just about everywhere else. This song has a great tribal beat (not circuit tribal for all those people out there who love their club music) and a great political message. This is probably one of the most exciting songs on the album. "Ice Cream," their big cult hit, is the following song. I cannot get enough of this song, and for those in the same boat, track down Van She's fantastic Tech Mix of this song. Blowing full force back into disco, this song is not only as infectious as ice cream, but just as smooth and delicious. NYCP amp it up for "The Bomb," a relative stomper with a sing-a-long feel to it. Definitely a stand out. There are only a few tracks I don't really dig, like "Talking, Talking" and "Grey," in which we are told that grey is not their favorite color.

Summary - This album is for anyone with a desire to shake their booty, for anyone who loves their music a little different, or for anyone who's been looking for the next Blondie.
Read more
2 people found this helpful
Helpful
Comment Report abuse

KOL
5.0 out of 5 stars Pretty good debut from Pony Club
Reviewed in the United States on August 28, 2007
This new group is all the rage in Britain at the moment and I have been following them for a while in the NME. I first got to hear them on the ultra-cheap digital penetration sampler that came out quite a while ago. This debut album really confirms that they are one of the more interesting bands to come out at the moment. They have very strong New Wave influences which might seem to be a bit trendy but they are really better than that. Blondie and others have been cited but I would in may ways put them closer to the Waitresses or ESG. The music is rather simle melodic New Wave with guitar and synthesizer. The singing is really good. The production could have been slightly cleaner but overall the album is great. One of the few records to buy this year so far (and believe me I have unfortunately bought the others as well).
Read more
4 people found this helpful
Helpful
Comment Report abuse

NotoriousTIMP
5.0 out of 5 stars Finally, a new CD that keeps my attention
Reviewed in the United States on September 15, 2008
I cannot stop listening to this band, their CD is catchy, moody, and will grab you from the get-go. I find it very rare these days to find a CD that i can honestly say I enjoy from start to finish. NYPC fits the bill as a band that has produced a album that is worth 5 stars.

Every single song is enjoyable and fun. Do yourself a solid and listen to the album for yourself. I think you wont be disappointed.
Read more
2 people found this helpful
Helpful
Comment Report abuse

Jym Buss
5.0 out of 5 stars Every Song is Great! One of those Rare Finds!
Reviewed in the United States on October 17, 2007
About every 6 to 7 years an album will come out where I hear it the first time and love everything on it. It is SO rare - examples would be 10,000 Maniacs "In My Tribe", Eurythmics "Peace", and Edie Brickell and the New Bohemians "Shooting Rubberbands at the Stars".

I was listening to independent radio here in LA and they played Ice Cream. The song IMMEDIATELY caught my attention with its hook much like CAKE did with "Never There".

I checked it out on Itunes and bought the album immediately. I have turned so many friends onto it and they are all amazed how hot their sound is...the band is tight and she is such a Blondie-esque detached almost "Waitresses" sound.

If you like punk, 80s new wave, dance or pop this CD will work for you!

J.W.
5.0 out of 5 stars Great Album!
Reviewed in the United States on October 16, 2007
I love that EVERY song on this album is worth listening to! This is my favorite new band, they are so fun and if you are into indie pop, or like to dance - buy this album!
Read more
2 people found this helpful
Helpful
Comment Report abuse
See all reviews

Christopher Hunter
4.0 out of 5 stars New Wavey-Electro-Punkey Thingy
Reviewed in the United Kingdom on January 24, 2008
Verified Purchase
Interestingly I have had some quite extreme reactions from some of the people who I have spoken to about this record. I think it never helps when a band gets well known via an over-played advert (Intel used `Ice Cream' for one of their adverts) but I really rate this record. For a change I actually think the more interesting tracks are at the end of the record then the start where they break away from the Blondie, nu-wave type sound.

NYPC produce some nice neat songs and clearly have listened to a lot of different sources to produce modern smart pop. They remind me a little of a cleaner sounding CSS. I believe their live performances can leave a little to be desired. We shall see.
Read more
One person found this helpful
Report abuse

RJ Gregg
5.0 out of 5 stars Join the club!
Reviewed in the United Kingdom on August 28, 2020
Verified Purchase
Heard Ice Cream on Lauren Laverne’s 6Music show. Didn’t disappoint so will explore the rest of their back catalogue.
Read more
Report abuse