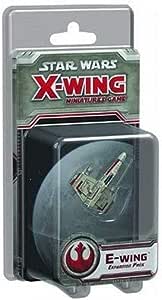 The E-wing was designed to match or exceed the performance of the X-wing in every respect and the E-Wing Expansion Pack for X-Wing introduces a starfighter that combines the best of the X-wing's firepower and durability with the A-wing's speed and maneuverability. With an E-wing miniature sculpted faithfully at 1/270 scale, four ship cards, five upgrade cards, maneuver dial and tokens, this expansion comes with everything you need to pursue entirely new tactics in your X-Wing battles!

4.8 out of 5 stars
4.8 out of 5
211 global ratings
How are ratings calculated?
To calculate the overall star rating and percentage breakdown by star, we don’t use a simple average. Instead, our system considers things like how recent a review is and if the reviewer bought the item on Amazon. It also analyzes reviews to verify trustworthiness.

Mark
4.0 out of 5 stars An upgrade on the T-65, but on the pricey side for what you get
Reviewed in the United States on September 16, 2019
Verified Purchase
Our T-65 X-wing has seen better days and I was very excited when the new E-wing arrived with just a couple of parsecs on it. The extra shielding and agility is appreciated during the inevitable encounters with the Empire on my daily commute. And it's fast too, with boost as standard - no need to continually open and close the s-foils. The sensor upgrade slot is a nice feature. I went with the cheaper Fire Control System option although Advanced Sensors was very tempting. Now for the negatives. It's already an expensive chassis and you've almost got to take the R4 astromech upgrade to help with your hard turns. This wouldn't be so bad in itself but it shuts off the other, more attractive astromech options such as an R2 unit. Why they couldn't have worked a bit harder on the handling is beyond me. Also, and I understand that they're supposedly 'experimental' tech, but the scanners are a pain. Yes, they let you get a target lock at long range, but not being able to get a lock at range 1 of an enemy ship is very frustrating and kind of negates the e-wings linked action options. So, overall, it's an upgrade on an x-wing. If they could solve the hard turns and scanners, this would be an awesome package.
Read more
Helpful
Comment Report abuse

Cary C.Top Contributor: Star Wars
5.0 out of 5 stars E-Wings never will replace X-wings
Reviewed in the United States on March 3, 2016
Verified Purchase
The blurb on the e-wing says it was designed to be better and eventually replace the x-wing but of course it never did because of the cost. I agree with this completely. The maneuvering dial is pretty amazing besting even the imperial tie defender in some ways but the cost on surprisingly low stats can’t justify the astronomical price. The e-wing cost between 27-35 squad points while x-wings can come in at 21-29 points a big difference. And yet when you compare the stats x-wings have 3 primary weapon, 2 agility, 3 hull, and 2 shields while e-wings have 3 primary weapons, 3 agility, 2 hull, and 3 shields. So essentially they upped the agility and moved a hull to shields, not really impressed. Personally I find myself reaching for x-wings over e-wings every time, the model is beautiful and the game mechanics are actually pretty good, but I find that the x-wings are more cost affective.
Read more
13 people found this helpful
Helpful
Comment Report abuse

silligirl62💃🏻🌹🥰❤
5.0 out of 5 stars My grandsons Jaden, loves playing with it🎈🥰☺‼
Reviewed in the United States on April 29, 2020
Verified Purchase
My grandsons LOVED this so much that I plan to order another, just like this one!!!
I highly recommend this🎈🥰☺‼

Gillian Bray Tunney
5.0 out of 5 stars Great rebel fighter in 2.0
Reviewed in the United States on June 15, 2020
Verified Purchase
Be aware, this is a 1.0 mini and you'll need a conversion kit to fly it. That said, what a fun fighter, early lock means double moded torps when you engage, super maneuverable, especially for a Rebel ship. Definitely going to get a second, if not third.
Read more
Helpful
Comment Report abuse

Jason Murphy
3.0 out of 5 stars Not what it could be
Reviewed in the United States on July 5, 2019
Verified Purchase
This is an ok rebel ship. It could use a fix or 2 as far as point cost and pilots, but still good.
Read more
Helpful
Comment Report abuse

Michelle
5.0 out of 5 stars As described in ad
Reviewed in the United States on May 25, 2020
Verified Purchase
Loved it as described
Read more
Helpful
Comment Report abuse

C. Booth
5.0 out of 5 stars A nice ship, but it comes with a high points cost
Reviewed in the United Kingdom on May 5, 2015
Verified Purchase
Lovely model. In the EU, the E-Wing was the intended successor to the iconic X-Wing, but it never gained traction with most pilots.

The model stats are slightly superior to the X-Wing, but not by a great deal. 3 agility gives the ship a decent defense, and the three shields and two hull points give you an extra soak for a dreaded critical hit, as opposed to the X-Wing's 3 hull and 2 shields. The ship is, though, expensive to field; it would not be advisable to field more than one in a standard game.

Corran Horn's ability is excellent, allowing him to fire twice in one turn, on the condition that he forfeits an attack in the following turn. Getting into range one of an enemy ship and having the potential to roll four attack dice followed by a further four attack dice at the end of the combat phase can work well for thinning or weakening an opponent's ships. Pairing him with R2-D2 is highly recommended, and will keep him on the table longer.He has a pilot kill of eight.
Etahn A'baht is another interesting pilot, and one that works well in Rebel swarm builds. If a Rebel ship attacks an enemy that is within range three of Etahn, that attacker can change one normal hit result to a critical. Etahn is, however, a costly 32 points. He has a pilot skill of five.
The two generic pilots come in with pilot skills of three and one, and cost 29 and 27 points respectively.
The most notable upgrade card is advanced sensors, and it is an extremely useful upgrade for a B-Wing, allowing an action to be taken before a maneuver.

All in all, it is a nice ship, but it is expensive to field. I would recommend probably only getting one, unless you really need another advanced sensors card for a tournament. The Lambda-Class shuttle is the only other ship I know of with this card.

Daniel hogg
5.0 out of 5 stars Fantastic
Reviewed in the United Kingdom on July 5, 2019
Verified Purchase
Ffg has done it again with another great ship for another fantastic quality game.
Read more
Report abuse

Simon
5.0 out of 5 stars Five Stars
Reviewed in the United Kingdom on July 13, 2015
Verified Purchase
Does what it says all good you play x wing you know what it does
Job done
Read more
Report abuse
See all reviews

Page 1 of 1 Start overPage 1 of 1
This shopping feature will continue to load items when the Enter key is pressed. In order to navigate out of this carousel please use your heading shortcut key to navigate to the next or previous heading.
Back
Next
Pages with related products. See and discover other items: jedi starfighter, game miniatures, fantasy game, gaming miniatures, painted miniatures, fantasy board games