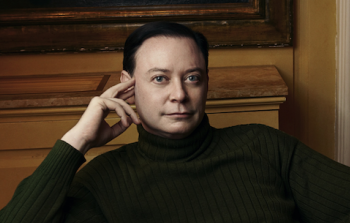 "Andrew Solomon is every bit as magnificent a traveler as he is a writer — in fact, it's difficult at times to determine which is the greater talent. Thankfully, the reader gets to experience both gifts throughout the pages of this deeply impressive and profoundly moving collection. Here is man whose curiosities are vast (politics, art, food, psychology, anthropology), and whose intellect is beautifully honed, but whose spirit is humble and whose heart is enormous. You will not only know the world better after having seen it through Solomon's eyes, you will also care about it more." -- Elizabeth Gilbert

"This is a beautiful book, inspired by love of ‘away' and uncertainty about ‘home,' a celebration of freedom which valuably warns that freedom must sometimes be learned. Much more than 'travel writing,' it's a portrait of our world, made by someone who has been there." -- Salman Rushdie

"From Cape Town to Bucharest, and Hangzhou to Tripoli, Andrew Solomon’s Far and Away is positively Whitmanian in its openness to difficulty and its embodiment of wonder. I felt exposed and expanded. This book is an ecstatic provocation to understand ourselves not as citizens of nations but as citizens of the entire world, a world whose territories are glorious and troubled and desperately connected." -- Leslie Jamison

"Agile, informative, even revelatory pieces that, together, show us both the great variety of humanity and the interior of a gifted writer's heart.", Kirkus, starred review

“Far and Away is a reminder that, although foreign reporting isn’t easy, and that American journalists probably get places wrong as often as they get them right, deep work is worth doing and worth paying for, both to encourage cultural exchange and because a skilled writer who reports at length may create literature.”, Pacific Standard

“Far and Away is a big, sumptuous collection of those pieces of reportage and travel writing. . . . . Solomon is foremost a keenly sympathetic observer; in every one of these reprinted pieces, he's carefully watching the everyday people on whose homes and plights he's also reporting. . . . . But prevailing mood is a smart, detail-oriented exuberance; this is a shrewd and generous view of the world as few people get to see it.”, Steve Donoghue, Christian Science Monitor

“[A] deeply humane book [that] cuts against the grain, urging readers to exit their comfort zones and engage with new people and unfamiliar points of view. . . . Solomon's reporting from far-flung places is surprisingly powerful, a bighearted response to a divisive era.”, Kevin Canfield, Minneapolis Star-Tribune

Andrew Solomon is a professor of psychology at Columbia University, president of PEN American Center, and a regular contributor to The New Yorker, NPR, and The New York Times Magazine. A lecturer and activist, he is the author of Far and Away: Essays from the Brink of Change: Seven Continents, Twenty-Five Years; the National Book Critics Circle Award-winner Far from the Tree: Parents, Children, and the Search for Identity, which has won thirty additional national awards; and The Noonday Demon; An Atlas of Depression, which won the 2001 National Book Award, was a finalist for the Pulitzer Prize, and has been published in twenty-four languages. He has also written a novel, A Stone Boat, which was a finalist for the Los Angeles Times First Fiction Award and The Irony Tower: Soviet Artists in a Time of Glasnost. His TED talks have been viewed over ten million times. He lives in New York and London and is a dual national. For more information, visit the author’s website at AndrewSolomon.com.

BA Stephens
3.0 out of 5 stars Three Stars
Reviewed in the United States on December 20, 2017
Verified Purchase
disappointing to me. It was well hyped!
Read more
Helpful
Comment Report abuse
See all reviews

William Jordan
4.0 out of 5 stars Interesting collection of writing on many themes, but all related to travel, from the last 20-25 years...
Reviewed in the United Kingdom on December 27, 2016
Verified Purchase
A book of travel reporting from the author of The Noonday Demon and Far From The Tree, written between the early 1990s and the present, together with a long introductory essay saying something bout his childhood and youth and how he comes to have travelled to so many countries. There's quite a bit of material that's linked to the author's interest in art (of which I had been unaware but he wrote his first book about Russian artists, I learned) - in Russia, China, Taiwan and South Africa. Then some pieces linked to, and indeed some excerpted from his work on depression - including the most interesting pieces on Greenland, Cambodia and an exorcism-type exercise he went in for in Africa and some pieces linked to and excerpted from Far From the Tree (though in that case interesting but perhaps not the most interesting pieces). There are also some pieces about political developments - Solomon was in Moscow at the time of the attempted coup against Gorbachov, and has also a long and quite interesting piece about Myanmar, for example. And finally, some more orthodox travel writing. Each piece has a short afterward, bringing the story up to date.

I didn't find this book quite as gripping as the Noonday Demon or Far From The Tree. In those cases, Solomon found a winning theme and developed in an unusual cross-cultural and original framework. Here the interest lies rather in the breadth of his interests, and the effort put into keeping up with life in many troubled parts of the world. A tempered optimism emerges. So I would recommend this, but not as strongly as his other works.
Read more
4 people found this helpful
Report abuse