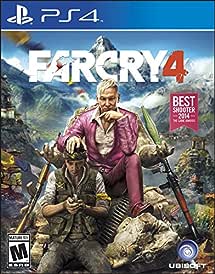 Discover the Most Diverse Far Cry Open World Ever Created

Not every journey should be taken alone. Far Cry 4 allows for a second player to drop in and drop out at any point, reimagining the co-op experience in the true spirit of next gen. Take over outposts, hunt, and discover and explore the living open world of Kyrat together.

In Far Cry 4, you won’t just explore Kyrat; you will also uncover its rich mythology. Transcend into the depths of your own mind and discover the spiritual world of Shangri-La, a fabled place sought after by mortals in hope of finding enlightenment. You will fight as a mythical warrior alongside a resilient and fearless white tiger – The Protector of Shangri-La. Work together to defeat the many evil enemies that have taken over Shangri-La, in the hope of restoring peace to the land of Kyrat.

Experience Free Open Word Co-OP for up to 10 of your friends who don’t own the game.

Buy Far Cry 4 on Playstation 4 system and receive 10 special Keys to Kyrat. Send the keys to up to 10 of your PlayStation Network friends who don’t own the game. Invite them into your open world and Explore Kyrat together for up to two hours of co-op gameplay.

Built from the legendary DNA of its award-winning predecessor, Far Cry 4 delivers the most expansive and immersive Far Cry experience ever in an entirely new and massive open world. With integrated drop-in/drop-out open world co-op play, Far Cry 4 re-imagines the cooperative experience for the next generation. You’ll now be able to discover and explore the living open world of Kyrat together.

Hidden in the towering Himalayas lies Kyrat, a country steeped in tradition and violence. You are Ajay Ghale. Traveling to Kyrat to fulfill your mother’s dying wish, you find yourself caught up in a civil war to overthrow the oppressive regime of dictator Pagan Min. Explore and navigate this vast open world, where danger and unpredictability lurk around every corner. Here, every decision counts, and every second is a story. Welcome to Kyrat.

4.6 out of 5 stars
4.6 out of 5
1,821 customer ratings
How does Amazon calculate star ratings?
Amazon calculates a product’s star ratings based on a machine learned model instead of a raw data average. The model takes into account factors including the age of a rating, whether the ratings are from verified purchasers, and factors that establish reviewer trustworthiness.

Tess Stickles
3.0 out of 5 stars If I have to play another mission where I'm hallucinating or have to fight a demon, I will SCREAM!
Reviewed in the United States on March 18, 2015
Platform: PlayStation 4Edition: StandardVerified Purchase
I want to like this game, I really do. The visuals are really quite stunning and I haven't enjoyed being in a game world as much since Red Dead Redemption. With that said, much like Far Cry 3, the missions are really annoying. The storyline has improved somewhat since the last installment but I still am more inclined to just liberate outposts and perform other side missions. I really couldn't care less about either of the sides I'm supposed to be choosing in this game and it's even more disappointing that the outcomes are equally unsatisfying.

I'm not really sure if the writers are dropping huge amounts of acid but they seem to have an affinity for writing it into their games. I grew tired of the gimmick after the second Act where I'm forced to escape the prison and evade a demon whilst drugged. I prefer my games to be more lucid and if I want to be on a bad acid trip, I will not rely on a game for that experience. I won't dare go back to the overhyped Shangri La unless i'm high in real life. Too bad. I really like achieving 100% in games but I don't even think I can finish this one.

Also, driving mechanics are still whack. Ubisoft needs to steal a page from EA and sort that out.

Gopi Krishna S
5.0 out of 5 stars Didn't like it at first, now a huge fan
Reviewed in the United States on March 30, 2017
Platform: PlayStation 4Edition: StandardVerified Purchase
Initially I didn't like this game at all. I was easily getting killed by the Royal army and the village hunters. I even thought of selling this game. Then I've watched few videos in the youtube before started playing again a week later. I was hooked on to it from that moment. It not just about shooting, it teaches you strategy on how to kill your enemies. There are few glitches in the graphics rendering, here and there. But I like the attention of details they've put into this game., like: Royal army soldier snoring while guarding the outpost and burning trees. Only thing I hate it when dogs/honey badgers attack, its difficult to look for them before you aim and kill them. I've completed 10/34 campaign missions so far. Yet to explore the north Kyrat. But the game is not allowing me to travel north, I need to complete more campaign missions. Overall its amazing game, wish there was a local multiplayer option.
Read more
9 people found this helpful
Helpful
Comment Report abuse

anonymoucity
5.0 out of 5 stars visuals and enemy AI make it stand out
Reviewed in the United States on January 26, 2015
Platform: PlayStation 4Edition: StandardVerified Purchase
First off, playing this on a PS4 the game looks great. The light especially is far more realistic than anything I've become used to on the PS3, and other releases on PS4. The shadows, foliage, the interplay of reflections on water with its surroundings... it's as pretty as a fully modded ENB play of Skyrim on a gaming PC.

Gameplay is very good. if you played FC3, you will be instantly familiar with outposts and how to tackle them, and the... be pawned for being unprepared and thinking that you can just bulldoze your way out of a sticky situation. These NPC's don't run on your dad's AI. Instead, you will be forced to actually strategize your approach, especially if you play stealth. NPC's will hear you moving around if you don't do it carefully. To me, that was the biggest surprise in gaming overall: that a studio bothered to develop NPC's such that they don't just see you but really do hear you and investigate.

Story-line felt thin and generic IMHO, but the main antagonist has an interesting personality. For me, the most relatable person was a side-kick named Rabi Ray Rana, who is a pirate radio operator talking your ears off every time you drive a car. I found his shtick very entertaining and ridiculous, and the best part: he has his own side-quest, so I actually got to meet him, adding to the immersion.

This demonstrates the level of detail the world has to offer. Forget racing though this game in 50 hours. you'd be missing out on too much by just focusing on main story missions. The world is humongous, so big in fact that i personally found it to be daunting. This is mostly due to the fact, that unfortunately, a lot of the non-quest activities are just too generic. The locations start to look the same after a while, so I don't see why I should bother trying to discover all 500 or so of them.

PRO:
very good enemy AI makes gameplay satisfying and a challenge
enormous world keeps you busy for a while
the art and feel and look of the world is simply outstanding - it really feels like a "world" not a "game", something that GTA V on PS4 did not achieve IMHO

CON:
world locations are repetitive after a while and the world ends up being simply big but nothing else
story missions advertise "choice" - forget about it, i'ts got no real effect, you just have slightly different cut scenes and 2 options of location for your final mission

PRO TIP:
don't miss out on side quests. some of them are just plain fun, others wonderfully silly, but rarely a tedious kill-n-fetch
Read more
6 people found this helpful
Helpful
Comment Report abuse

Craig SullivanTop Contributor: Pets
5.0 out of 5 stars Fun and addicting
Reviewed in the United States on August 17, 2015
Platform: PlayStation 4Edition: StandardVerified Purchase
I'm not sure if it matters, but I have never played any of the Far Cry games until this one. That will definitely change. The graphics are very impressive and the environments have great detail. The effects from various environment changes/angles is also very impressive. The game play is entertaining and really allows you to play however you like, so if you have plenty of time you can chug through the story/main missions or if you don't have a lot of time, you can cruise through smaller missions like hostage rescues, hunting and racing (racing is a little odd I'll admit).

I was entertained by the story and the missions. Some missions I definitely didn't care for but it didn't ruin the game. And if you have never played the series before, its not a bad time to start.
Read more
8 people found this helpful
Helpful
Comment Report abuse
See all reviews from the United States

Page 1 of 1 Start overPage 1 of 1
This shopping feature will continue to load items when the Enter key is pressed. In order to navigate out of this carousel please use your heading shortcut key to navigate to the next or previous heading.
Back
Next
Pages with related products. See and discover other items: cyber monday ps4, ps4 digital codes full game, ps4 games black friday deals, ps4 top games, games on ps4, playstation 4 games