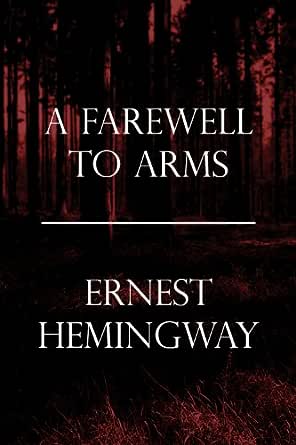 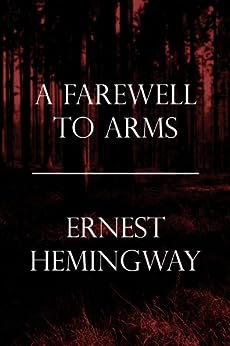 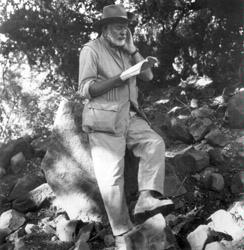 A Farewell to Arms Kindle Edition

As a youth of 18, Ernest Hemingway was eager to fight in the Great War. Poor vision kept him out of the army, so he joined the ambulance corps instead and was sent to France. Then he transferred to Italy where he became the first American wounded in that country during World War I. Hemingway came out of the European battlefields with a medal for valor and a wealth of experience that he would, 10 years later, spin into literary gold with A Farewell to Arms. This is the story of Lieutenant Henry, an American, and Catherine Barkley, a British nurse. The two meet in Italy, and almost immediately Hemingway sets up the central tension of the novel: the tenuous nature of love in a time of war. During their first encounter, Catherine tells Henry about her fiancé of eight years who had been killed the year before in the Somme. Explaining why she hadn't married him, she says she was afraid marriage would be bad for him, then admits:

The two begin an affair, with Henry quite convinced that he "did not love Catherine Barkley nor had any idea of loving her. This was a game, like bridge, in which you said things instead of playing cards." Soon enough, however, the game turns serious for both of them and ultimately Henry ends up deserting to be with Catherine.

Hemingway was not known for either unbridled optimism or happy endings, and A Farewell to Arms, like his other novels (For Whom the Bell Tolls, The Sun Also Rises, and To Have and Have Not), offers neither. What it does provide is an unblinking portrayal of men and women behaving with grace under pressure, both physical and psychological, and somehow finding the courage to go on in the face of certain loss. --Alix Wilber --This text refers to an alternate kindle_edition edition.

6 1.5-hour cassettes --This text refers to an alternate kindle_edition edition.

John Slattery reads this classic novel of an American ambulance driver in the Italian army during WWI and his fateful love affair with a British nurse. Slattery narrates in an expressionless voice--something like Bill Murray in affectless mode--perhaps to mirror the simplicity of Hemingway's prose. But the prose, or at least the dialogue, at this remove often seems mannered, and the reading obstinately flat. Slattery becomes expressive when doing accents, which is a relief. His Scottish and Italian are good, though all the Italians sound alike, including the women. His British accent is not quite so good. But taken altogether, this production effectively presents a novel that still carries some power. W.M. © AudioFile 2006, Portland, Maine-- Copyright © AudioFile, Portland, Maine --This text refers to an alternate kindle_edition edition.

"Hard, almost metallic, glittering, blinding by the reflections of its hard surface, utterly free of sentimentality- a strange and original book, it will convince you of its honesty and veracity" -- Arnold Bennett "A most beautiful, moving and humane book" -- Vita Sackville-West "A novel of great power." * TLS * --This text refers to an alternate kindle_edition edition.

Ernest Hemingway (1899-1961) was one of the twentieth century's most important novelists, as well as a brilliant short story writer and foreign correspondent. His body of work includes the novels A Farewell to Arms, For Whom the Bell Tolls, and The Sun Also Rises. He won the Pulitzer Prize for his novella The Old Man and the Sea, and in 1954 was awarded the Nobel Prize for Literature.

In the late summer of that year we lived in a house in a village that looked across the river and the plain to the mountains. In the bed of the river there were pebbles and boulders, dry and white in the sun, and the water was clear and swiftly moving and blue in the channels. Troops went by the house and down the road and the dust they raised powdered the leaves of the trees. The trunks of the trees too were dusty and the leaves fell early that year and we saw the troops marching along the road and the dust rising and leaves, stirred by the breeze, falling and the soldiers marching and afterward the road bare and white except for the leaves.

The plain was rich with crops; there were many orchards of fruit trees and beyond the plain the mountains were brown and bare. There was fighting in the mountains and at night we could see the flashes from the artillery. In the dark it was like summer lightning, but the nights were cool and there was not the feeling of a storm coming.

Sometimes in the dark we heard the troops marching under the window and guns going past pulled by motor-tractors. There was much traffic at night and many mules on the roads with boxes of ammunition on each side of their pack-saddles and gray motor trucks that carried men, and other trucks with loads covered with canvas that moved slower in the traffic. There were big guns too that passed in the day drawn by tractors, the long barrels of the guns covered with green branches and green leafy branches and vines laid over the tractors. To the north we could look across a valley and see a forest of chestnut trees and behind it another mountain on this side of the river. There was fighting for that mountain too, but it was not successful, and in the fall when the rains came the leaves all fell from the chestnut trees and the branches were bare and the trunks black with rain. The vineyards were thin and bare-branched too and all the country wet and brown and dead with the autumn. There were mists over the river and clouds on the mountain and the trucks splashed mud on the road and the troops were muddy and wet in their capes; their rifles were wet and under their capes the two leather cartridge-boxes on the front of the belts, gray leather boxes heavy with the packs of clips of thin, long 6.5 mm. cartridges, bulged forward under the capes so that the men, passing on the road, marched as though they were six months gone with child.

There were small gray motor cars that passed going very fast; usually there was an officer on the seat with the driver and more officers in the back seat. They splashed more mud than the camions even and if one of the officers in the back was very small and sitting between two generals, he himself so small that you could not see his face but only the top of his cap and his narrow back, and if the car went especially fast it was probably the King. He lived in Udine and came out in this way nearly every day to see how things were going, and things went very badly.

At the start of the winter came the permanent rain and with the rain came the cholera. But it was checked and in the end only seven thousand died of it in the army.