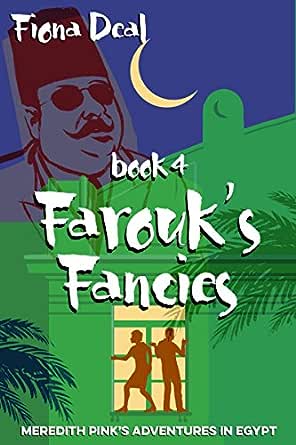 You've subscribed to Meredith Pink's Adventures in Egypt! We will preorder your items within 24 hours of when they become available. When new books are released, we'll charge your default payment method for the lowest price available during the pre-order period.
Update your device or payment method, cancel individual pre-orders or your subscription at
Your Memberships & Subscriptions
There was an error. We were unable to process your subscription due to an error. Please refresh and try again. 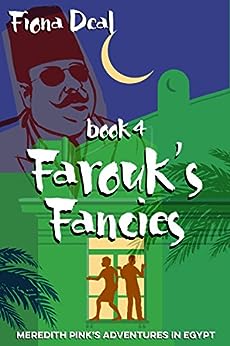 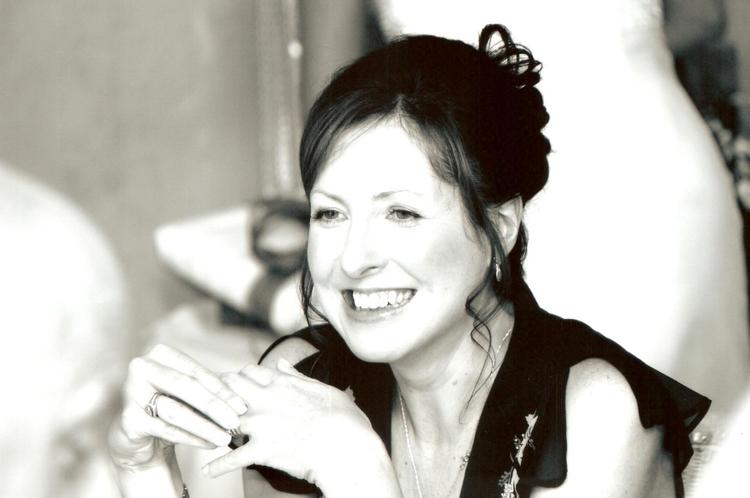 Beyond your wildest dreams
From DC & Neil Gaiman, The Sandman arises only on Audible. Listen free with trial
click to open popover
Books In This Series (9 Books)
Complete Series 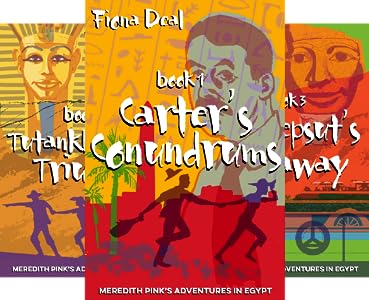 4.5 out of 5 stars
4.5 out of 5
24 customer ratings
How does Amazon calculate star ratings?
Amazon calculates a product’s star ratings based on a machine learned model instead of a raw data average. The model takes into account factors including the age of a rating, whether the ratings are from verified purchasers, and factors that establish reviewer trustworthiness.
Top reviews

Dikigoros
5.0 out of 5 stars Entertaining fiction set in contemporary Egypt
Reviewed in the United States on January 1, 2014
Verified Purchase
Set in Luxor, Egypt, Fiona Deal's fourth book in the Meredith Pink series offers us some flashbacks to the 20th century pre-revolutionary era of King Farouk's reign. What I find about the author's most appealing quality of her writing is her vibrant way of painting the backdrop of the action. As a part-time resident in Egypt in the rather distant past I feel like being transported back to the land of the Nile with many of my fond memories revived. I enjoyed Farouk's Fancies with its interesting plot and affable characters. Another excellent read from Fiona Deal.
Read more
Helpful
Comment Report abuse

Jen S
5.0 out of 5 stars A very enjoyable series...don't miss the fun!
Reviewed in the United States on January 9, 2015
Verified Purchase
No lack of twist and turns that keeps you reading till the small hours of the night. Loved this book and how the story moved. It kept me guessing “what kind of life did this little old lady live???” A very enjoyable series...don't miss the fun!. I would highly recommend!
Read more
Helpful
Comment Report abuse

gramma paint
5.0 out of 5 stars Merry does it again!
Reviewed in the United States on June 15, 2014
Verified Purchase
Action, drama, a mystery to solve....says it all.
Plus, a today's look at a famous old hotel.
A fast and enjoyable read!
Read more
Helpful
Comment Report abuse
See all reviews from the United States

Robbie
3.0 out of 5 stars Is it the last of Meredith Pinks Adventures
Reviewed in the United Kingdom on June 24, 2014
Verified Purchase
Read the first of these books and must say I enjoyed it so ordered the set (which there are four) this being the last I presume. To say they are far fetched is putting it mildly, as Merry seems to find lost tombs, artefacts that have been buried for centuries and gets herself and her new boyfriend into predicaments looking for lost Egyptian treasure. They were an easy going read gave loads of info on the Egyptian dynasties but at times did get on my nerves a bit and was tempted to skip but didn't incase I missed part of the story that was relevant. Finally I felt each book was on the same lines and you knew what was going to happen
Read more
One person found this helpful
Helpful
Sending feedback...
Thank you for your feedback.
Sorry, we failed to record your vote. Please try again
Report abuse

M. J. Miles Lea
5.0 out of 5 stars A fourth fantastic adventure.
Reviewed in the United Kingdom on January 20, 2014
Verified Purchase
Having enjoyed the first three books in this series, I had to get the fourth. I was not disappointed. This tale is definitely different from the first three, but still retains the humour and pace.
Merry and Adam's relationship develops further, and we are introduced to some new characters as well as some old favourites (Ahmed). Inevitably there is a mystery to solve - this is a Meredith Pink adventure after all - but this time the puzzle is (partly) a few thousand years younger, as Merry and Adam get caught up in the ripples from real 20th century events.
This is a fun, easy read, and reminded me there's more to Egypt than the recent depressing headlines. I read this over a few January evenings, the perfect antidote to a cold English winter.
You can read and enjoy this on its own, but I'd recommend reading the series in order, starting with Carter's Conundrums. Enjoy!
Read more
Helpful
Sending feedback...
Thank you for your feedback.
Sorry, we failed to record your vote. Please try again
Report abuse

PAUL E. SMITH
5.0 out of 5 stars Fancy a good read? Farouk's Fancies - well worth it.
Reviewed in the United Kingdom on January 7, 2014
Verified Purchase
In the first three novels in this series the heroine, Meredith Pink, showed an unerring ability to land herself in the middle of a set of complicated, dangerous Egyptian mysteries. Tying the Pharaonic past with really up to date Egyptian story lines made for an exciting combination of intrigue and suspense. Having resolved the Carter, Tutankhamun and Hapshepsut elements, it was intriguing to see where the author would take us next. Was there another mystery in the Egyptian past that could grip us like the the anomalies revealed in the previous novels?
In Farouk's Fancies, Fiona Deal has found an ideal topic to plunge us, once more, into the rather breathless world inhabited by Meredith Pink. Life was never going to be quiet for our heroine and her partner, Adam, and even as they finish renovating their Nile barge they find themselves once more involved in skulduggery from Egypt's more recent past. The plot thickens and races through a number of permutations before resting on a conclusion that intimates there is potentially another book to come in this series. Most of the previous characters reappear in the current book with a new cast of villains and some hapless newcomers whom Meredith readily rescues. Egypt itself, at this stage, is almost a character, as its presence is felt both in terms of its impact in the present and through the weight of history that seems to pour from the pages. The historical detail in the whole series has been one of my highlights, Ms Deal impresses with her exploration of the known facts and how they could potentially be weaved into an historical narrative.
Farouk's Fancies then, a good read, keeping up the standard of the previous books in the series and the anticipation of yet another to come. I can't wait!
Farouk's Fancies can be read on its own and bears up well but why not read the first three novels as well? All four will allow you to relax into a world that is far away from a cold, wet winter and keep you intrigued by the mysteries that still cling to the Pharaohs and ancient Egypt.
Read more
One person found this helpful
Helpful
Sending feedback...
Thank you for your feedback.
Sorry, we failed to record your vote. Please try again
Report abuse

Ella Holt
4.0 out of 5 stars Great adventure stories
Reviewed in the United Kingdom on October 10, 2015
Verified Purchase
Adventure and fantasy with great egyptological facts keeps you gripped to the last page wanting more.
Can't wait to go back to Hatchepsuts magnificent temple.
Start with book 1 of the series and live the dream
Read more
Helpful
Sending feedback...
Thank you for your feedback.
Sorry, we failed to record your vote. Please try again
Report abuse
Load more international reviews

Bookworm
5.0 out of 5 stars Good read.
Reviewed in the United Kingdom on December 5, 2015
Verified Purchase
Love this Author, and the characters are well rounded, believable and interesting.
Read more
Helpful
Sending feedback...
Thank you for your feedback.
Sorry, we failed to record your vote. Please try again
Report abuse

swissphile
3.0 out of 5 stars Fast paced Egyptian archaeology/ krimis.
Reviewed in the United Kingdom on April 5, 2014
Verified Purchase
I thought the author had slightly run out of ideas after three exciting, well researched books. I would however be tempted give book 5 another go should it appear !
Read more
Helpful
Sending feedback...
Thank you for your feedback.
Sorry, we failed to record your vote. Please try again
Report abuse

Jayne
3.0 out of 5 stars No quite as good as the others
Reviewed in the United Kingdom on March 5, 2014
Verified Purchase
I've enjoyed this series but book 4 felt a little short of plot and seemed a bit tired. I still enjoyed the read but I hope the next one, if she does a next one, lives up to books 1 - 3.
Read more
Helpful
Sending feedback...
Thank you for your feedback.
Sorry, we failed to record your vote. Please try again
Report abuse
Load more international reviews

Mrs Debbie Tily
5.0 out of 5 stars A must read
Reviewed in the United Kingdom on January 27, 2015
Verified Purchase
I could not put this book down. Merry and Adams adventures race along and take you along with them.
Read more
Helpful
Sending feedback...
Thank you for your feedback.
Sorry, we failed to record your vote. Please try again
Report abuse

Pris
5.0 out of 5 stars Five Stars
Reviewed in the United Kingdom on July 27, 2014
Verified Purchase
If you love Egypt you will love this. Its light hearted and easy to read.
Read more
Helpful
Sending feedback...
Thank you for your feedback.
Sorry, we failed to record your vote. Please try again
Report abuse