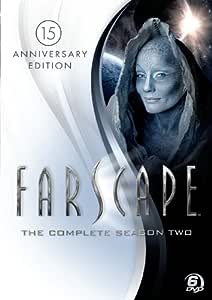 Farscape Season Two unfolds as a tapestry of histories and mysteries. Following Season One s harrowing finale, John Crichton and the crew of the living space ship Moya must now evade the villainous Scorpius. But that s even harder than it seems, thanks to the insidious connection Scorpius has forged with Crichton. And if the Peacekeepers weren t enough trouble, Crichton and company soon cross paths with the ambitious, reptilian Scarran race.

The crew s unstable camaraderie is tested when they discover the part a crew member played in the brutal fate of Moya s first Pilot. Things spin even further out of control as the crew struggles to deal with the violent nature of Moya s offspring not to mention murders, royal weddings, identity crises, terrorists and slave traders.

Ben Browder (born December 11, 1962) is an American actor and writer, known for his roles as John Crichton in Farscape andCameron Mitchell in Stargate SG-1.

Claudia Lee Black (born 11 October 1972) is an Australian actress and voice actress, known for her portrayals of Aeryn Sun in the science fiction series Farscape and Vala Mal Doran in the science fiction series Stargate SG-1 (both on television); and Chloe Frazer in the Uncharted series, the witch Morrigan in Dragon Age: Origins, Sharon Montgomery in Pitch Black, and squadmate Samantha Byrne in the game Gears of War 3 (all video games).

Anthony Simcoe (born 7 June 1969) is an Australian actor, best known for his portrayal of Ka D'Argo in the science fiction television series Farscape. The 6 ft 6 in Simcoe is a graduate of the National Institute of Dramatic Arts in Sydney. He holds an MFA in Drama, specializing in actor training. Simcoe gained international fame when he was cast as Ka D'Argo in Farscape. He was nominated for a Saturn Award for Best Supporting Actor in a Television Series in 2002 for his work on the show. He has also appeared in several other television series including Chameleon. He also does an appearance in the short film Syntax Error. Between acting roles he works as a freelance corporate trainer. He also performs in the band Signal Room (formerly known as The Giant Killers, and Number 96), along with fellow Farscape cast member Wayne Pygram. He has two sons, Willem Lee and Jackson Ty; both born on Fridays.

Rockne S. O'Bannon is a television producer and writer. He is the creator of the science fiction film Alien Nation and the television seriesseaQuest DSV, The Triangle, Farscape, Cult and Defiance. He is married with one daughter and two sons and resides in California. O'Bannon grew up the son of a gaffer, he was surrounded by film from his birth. His father worked on various films through Warner Bros. golden age, and his mother was a professional dancer who performed with Fred Astaire. He started writing in high school, and wrote many spec scripts (works written on speculation, without a verbal or written contract), and eventually submitted them to NBC's Amazing Stories and CBS's The Twilight Zone (1985). CBS bought one of them, and after a second script sale for The Twilight Zone, he was hired on as a staff writer.

Liz H1000
3.0 out of 5 stars No CC
Reviewed in the United States on March 26, 2019
Verified Purchase
Really enjoy this series. Unfortunately, not CC as advertised. Especially an issue, since between poor sound quality and Aussie accents can make speech difficult to understand. 🤬
Read more
One person found this helpful
Helpful
Report abuse

Russell A. Palmer
5.0 out of 5 stars Five Stars
Reviewed in the United States on April 20, 2018
Verified Purchase
I enjoyed it, but have not seen the new ones.
Read more
Helpful
Report abuse

B. Keener
5.0 out of 5 stars Thanks
Reviewed in the United States on June 22, 2019
Verified Purchase
Great show thanks
Read more
Helpful
Report abuse

Jen
4.0 out of 5 stars One of the best tv series around
Reviewed in the United States on March 20, 2015
Verified Purchase
I loved this series when it first came out and I am happy that they released the 15th Anniversary Edition. I think some of my favorite episodes are in season 2 and I love the extras and the interviews on the dvds. The only negative I would have to say is that there are no subtitles.
Read more
One person found this helpful
Helpful
Report abuse

drcg
5.0 out of 5 stars Love it.
Reviewed in the United States on July 30, 2015
Verified Purchase
I got this to complete the set and I do think it adds to the overall story. Since I love the Farscape series I gave it 5 stars. As a stand alone, I might not rate it as high.
Read more
Helpful
Report abuse

Demon Necron
5.0 out of 5 stars 2nd must buy in the series
Reviewed in the United States on October 23, 2014
Verified Purchase
Fantastic show that reminds me a little bit of Firefly but much more alien mix to the crew as well as the enemies and inhabitants of the worlds. They do change a few common words such as Hour=Arn, Minute=Microt, and ill let you figure out frell. All in all I really love this show and it's characters.
Read more
Helpful
Report abuse

Deborah
5.0 out of 5 stars The DVDs were excellent.
Reviewed in the United States on August 23, 2019
Verified Purchase
I enjoy the series!
Read more
Helpful
Report abuse
See all reviews