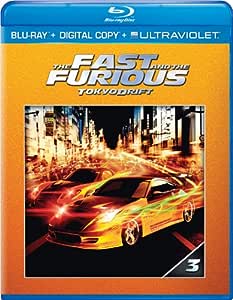 The Fast and the Furious: Tokyo Drift [Blu-ray]

From the makers of The Fast and the Furious and 2 Fast 2 Furious comes the highest-octane installment of the hit movie franchise built for speed! When convicted street racer Sean Boswell (Lucas Black) tries to start a new life on the other side of the world, his obsession with racing sets him on a collision course with the Japanese underworld. To survive, he will have to master drifting – a new style of racing where tricked-out cars slide through hairpin turns, defying gravity and death for the ultimate road rush. With more mind-blowing stunts and heart-pounding racing sequences than ever, The Fast and the Furious: Tokyo Drift puts you in the driver's seat. "Strap yourself in for a blistering, super-charged ride." – Pete Hammond, MAXIM

4.7 out of 5 stars
4.7 out of 5
6,020 global ratings
How are ratings calculated?
To calculate the overall star rating and percentage breakdown by star, we don’t use a simple average. Instead, our system considers things like how recent a review is and if the reviewer bought the item on Amazon. It also analyzes reviews to verify trustworthiness.

lemoncrush
5.0 out of 5 stars Best in the series
Reviewed in the United States on May 31, 2018
Verified Purchase
l love this movie. It's definitely the best one in the series in my opinion. Lucas Black is AWESOME in this movie. His Southern accent is gorgeous. Happy with the purchase
Read more
12 people found this helpful
Helpful
Report abuse

Chad S
5.0 out of 5 stars A review about the quality of the product,not rotten tomatoes
Reviewed in the United States on December 10, 2018
Verified Purchase
as fan of the series and this movie being my favorite for it's cult status more than anything. However my review is about the 4k aspect of this film. I was very surprised this movie could look this good. Having seen it in theaters in the bad quality it was shown in, this was true bliss. As if I was watching Han truly die for the first time. Recommended for anyone who has the system to display this masterpiece.
Read more
5 people found this helpful
Helpful
Report abuse

Dborg58
5.0 out of 5 stars Let the movie be a stand alone. WABAKI !!!
Reviewed in the United States on January 19, 2019
Verified Purchase
Fast, Furious and new story. Yeah I know most people won’t like it because God for bid Vin Diesel is it in it...spoil alert… But this was actually a decent story and can stand on its own. Besides by the time the other movies rolled around this movie does have a connection to the others and not just Vin Diesel.
Read more
4 people found this helpful
Helpful
Report abuse

LINY71
2.0 out of 5 stars Not In Same Class
Reviewed in the United States on May 7, 2019
Verified Purchase
I really like the Fast & Furious movies (series) but this one just didn't live up to the others I've seen, and I've seen half of them. I like the chemistry between the characters in the other movies that have a tight family-like relationship. If you like Luke Black, the actor from NCIS New Orleans who plays the main character, then maybe you'll like this movie, but it just seemed like a fish out of water within the series without those other people/relationships. The car racing is fine but the plot is limited. Save your money and rent don't purchase.
Read more
Helpful
Report abuse

joemama127
3.0 out of 5 stars Fun...guilty pleasure
Reviewed in the United States on March 1, 2008
Verified Purchase
Even though I am well above the age that should like movies such as this...I couldn't help but be entertained.

It doesn't get any shallower than this movie....the first FATF movie was about young 20 somethings trying to find their place in the world...Tokyo drift takes us back to the highschool days (but uses 20 something actors)both in America and Japan....exaggerated and stereotyped versions of both.

The plot and acting doesn't even meet the standards of a Disney teen flick..but if you love cars, (particularly Japanese imports) street races and chases...then Tokyo Drift is for you. It is beautifully filmed...and looks spectacular in HD. This movie is all about over saturated colors, pumping music and screaming engines/screeching tires. Just toss a bag of popcorn in the microwave, shift your brain into neutral (no thinking required) and have a good time with this movie.

Louis
5.0 out of 5 stars Love this movie!
Reviewed in the United States on July 5, 2020
Verified Purchase
This is actually one of my favorite ff movies. It’s was a different look with drifting. It was the last movie in the franchise before they got super action focused. I still like all the others but Tokyo drift is great!
Read more
Helpful
Report abuse

Haley Harrington
5.0 out of 5 stars JDM palooza
Reviewed in the United States on November 3, 2020
Verified Purchase
10 outa 10 would recommend 👌 if you want to learn about Japan and their culture and all things drifting and JDM, then this heart-pulsing, thrilling mind bending, seizure inducing cinematic experience is for YOU.
Read more
Helpful
Report abuse

mary stoner
5.0 out of 5 stars Not the best movie in the series
Reviewed in the United States on November 16, 2020
Verified Purchase
This movie was one of the last in the series to purchase because it was in a weird compared to the first two. When 4-8 came out this finally fit into the Fast and Furious saga and I was willing to make the final purchase.
Read more
Helpful
Report abuse
See all reviews

Samson
5.0 out of 5 stars Greta film - love it.
Reviewed in the United Kingdom on May 23, 2016
Verified Purchase
If you're new to the Fast & Furious franchise, and this is the first one you're watching, then this will be just a film with some nice cars in it, some nice looking girls wearing not very much, some dodgy deals, and a bald bloke who turns up at the end and who for some reason wants to race a car the size of a small town around a multi-storey car park in Tokyo.

If on the other hand, you've followed F&F from the beginning, and watched them in order, then it's not until FF7 when you finally find out where FFTD fits in, and how it ties up a few loose ends,answers some lingering questions, and shows that as far as the franchise is concerned, someone was really thinking ahead when they made FFTD.

On it's own, this is a good film, with some good driving sequences, the stand out one for me being the drift through the crowd at the crossings, and the overhead shot of the crowd parting to let the cars through is great to watch.

So if you like nice cars and nice looking girls wearing not very much - watch this film.

In response to something a previous viewer said Drift racing does exist outside of video games with Drift GPs in this country, also Lucas Black's Southern accent is completely real, he previously turned down a role in the Horse Whisperer because they wanted him to change his accent.
Read more
2 people found this helpful
Report abuse

Carlos
3.0 out of 5 stars Mediocre
Reviewed in the United Kingdom on March 2, 2019
Verified Purchase
Mediocre, as simple as that. Some terrible acting and script in places. However, as you'd expect, some of the races really are exhilarating. Certainly not the best or worst film in the franchise.
Read more
One person found this helpful
Report abuse

Kaz40
4.0 out of 5 stars Fast delivery
Reviewed in the United Kingdom on April 8, 2018
Verified Purchase
Film came in brand new packaging and played perfectly and enjoyed watching in blu-Ray for the first time. Delivery was super quick too.
Read more
Report abuse

Alan J.
4.0 out of 5 stars Good film
Reviewed in the United Kingdom on October 24, 2019
Verified Purchase
Good film just not as good as the other ones
Read more
Report abuse
See all reviews