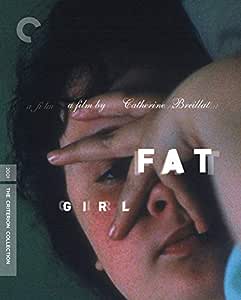 Twelve-year-old Anaïs is fat. Her sister, fifteen-year-old Elena, is a beauty. While the girls are on vacation with their parents, Anaïs tags along while Elena explores the dreary seaside town. Elena meets Fernando, an Italian law student; he seduces her with promises of love, and the ever watchful Anaïs bears witness to the corruption of her sister’s innocence. Fat Girl (À ma soeur!) is not only a portrayal of female adolescent sexuality and the complicated bond between siblings but also a shocking assertion by the always controversial Catherine Breillat (Romance, The Last Mistress) that violent oppression exists at the core of male-female relations.

3.4 out of 5 stars
3.4 out of 5
114 global ratings
How are ratings calculated?
To calculate the overall star rating and percentage breakdown by star, we don’t use a simple average. Instead, our system considers things like how recent a review is and if the reviewer bought the item on Amazon. It also analyzes reviews to verify trustworthiness.
Top reviews

Thor-Zine
4.0 out of 5 stars Don't Let the darkness scare you away!
Reviewed in the United States on May 6, 2018
Verified Purchase
This is a challenge the most difficult movie I ever had to review since "Beloved". A very dark movie that hits home and can depress you to a point that you feel down after seeing it. Then you ask yourself "was it a good movie?" and the answer is yes. This a stark movie about two teenage sisters, the younger one is fat, the older one is pretty; the positive influences the one gets, the negative remarks the other gets totally on their looks. The Parents are totally clueless, the mother draws closer to the pretty sister because they share looks and figure while being borderline disgusted of the fat sister, at the same time trying to be the good parent of both. The Father works a lot and doesn't want to get involved.
Teenagers want to be sexually active and get involved with the other sex. The younger one talks out loud about how she would like to be romantically and sexually involved and yet sees all the attention go to her older sister.

Without giving it the rest away, the movie is about a summer vacation the family takes and how both sisters discover their sexuality.

David
5.0 out of 5 stars Fat girl is more about her attractive sister.
Reviewed in the United States on September 24, 2020
Verified Purchase
It is a coming of age movie, this is a good copy from the criterion collection, 15year old girl on holiday at a sea shore in France with her family from Paris meets a college age man and begins a sexual relationship, and having sex in the same bed room with her fat sister in the room, ending is a shocker maybe a little far out of script but you will believe or not.
Read more
One person found this helpful
Helpful
Report abuse

alvin
4.0 out of 5 stars slow burning movie but ok to watch
Reviewed in the United States on May 5, 2020
Verified Purchase
this was a kinda slow movie with english subtitles but fairly good what i saw was a movie about under age teen girls sisters the oldist who is 15 meets a older collage men mable in his 20s who talks his way between her legs and her not letting her parent know and her younger sister who waitig for her first sex but the movie has a twist in the end
Read more
Helpful
Report abuse

No nonsense
5.0 out of 5 stars Inspiring for any lovers of cinema
Reviewed in the United States on November 1, 2019
Verified Purchase
We need more of this kind of film making. Sexy, uncomfortable, honest and unpredictable. I love the darkness with a dash of hope and desperation. One of my favorite films. Inspiring.
Read more
One person found this helpful
Helpful
Report abuse

Jenn
1.0 out of 5 stars Not my cup of tea
Reviewed in the United States on May 15, 2017
Verified Purchase
This film was listed on a top 10 best foreign films list. In my opinion it's one of the worst. I just didn't care about any of the characters and the film was so dull that it took me three days to get finish watching it.
Read more
2 people found this helpful
Helpful
Report abuse

Dine Fuss
4.0 out of 5 stars Breillat - Leaves a Lasting Imprint in the Cerebral Cortex
Reviewed in the United States on November 7, 2004
Verified Purchase
Two teenage sisters, Anaïs and Elena, are on vacation with their parents. This means when the older, Elena, begins to explore the quiet seaside town the younger, Anaïs, tags along. On their trivial explorations the girls talk about what interests them the most, love, as both girls are curious and beginning to form their own notions on love. Elena is the slim, pretty, and confident sister that has intrinsic needs to feel and express love, while Anaïs is round and timid, yet perceptive and thoughtful. Often Anaïs drifts into a melancholic slump in which she recites gloomy poetry as an internal reflection, which becomes a psychosocial depiction of anxiety in regards to her own body image.

When the two sisters encounter Fernando, an Italian law student on vacation with the parents, Elena is flattered by his attention to her. They quickly initiate a close physical connection as Fernando desires Elena while Elena wishes for love. However, the connection between Elena and Fernando is doomed from the moment they met as he is quick to meet her requests in order to accomplish the mission to conquer her. Anaïs sees through Fernando's charade, but Elena does not want to hear about it as her wishes for love are stronger than her convictions.

It is expected that Elena will be hurt, as the painful journey to come of age continues, but she cannot abandon Fernando as her wisdom does not supersede her inner desire to share the affection of love. In the shadow of Elena's disastrous love affair Anaïs witnesses everything as she shares a room with her older sister. Anaïs's witness to Elena's journey affects her perception of herself and love as her thoughts of herself grow darker and deeper.

Fat Girl is no rosy teenage love comedy, which frequently is released from major production companies. Instead the director Catherine Breillat portrays a dark and hard-hitting coming of age story that strikes the retina with haunting realism and the eardrum with gloomy poetry, which leaves a lasting imprint in the cerebral cortex. The cinematography and mise-en-scene enhance the cinematic experience as they enhances the dark atmosphere which Anaïs is experiencing. The beach scene where Anaïs lays on the sand as the sea water barely reaches her is an unforgettable moment as it illustrates her perception of her existence. Lastly, the final sequences of the film will unexpectedly shake a drained audience as it offers much to reflect upon in Anaïs's perspective.

Bigstory
5.0 out of 5 stars French Cuisine
Reviewed in the United States on January 28, 2010
Verified Purchase
A dark and moody story about two pretty sisters, one of the thin variety and the other of the chubby variety, who go through various phases of emotional trauma. In addition to the movie, you get several 'extras' that attempt to shed some light and give further insight into the characters, story, and the director herself, Catherine Breillat.

These extra features include 'Making of Fat Girl'(5:39), Interview w/Catherine Breillat(9:56), 2001 Berlin Film Festival(11:48), and a Theatrical Trailer which includes the French(1:10) and U.S.(1:21) versions of Fat Girl. I enjoyed getting the extra scenes and alternate ending in addition to some behind-the-scenes footage.
Read more
8 people found this helpful
Helpful
Report abuse

ergoatlantis
5.0 out of 5 stars Another work spoiled by the BBFC
Reviewed in the United Kingdom on September 26, 2016
Verified Purchase
I will not go into too much detail regarding the plot because other reviewers have done a much better job than I could achieve so I will simply say that the ending is the controversial bit but if you want to form your own opinion on the matter then you will have to ignore the UK version and get it from elsewhere: our good old BBFC has decided to do our thinking for us and cut it up. The Criterion edition reviewed here is the uncut version but being Region 1, UK viewers will need a multi-region DVD player.

The plot revolves around two sisters, the elder in her teens and pretty, whilst the younger is gauche and a bit overweight. This is their sexual awakening. Without giving too much away, the ending according to Catherine Breillat is based on an actual event but you will have to see it for yourselves.
Read more
One person found this helpful
Report abuse

Pen
4.0 out of 5 stars Breilliat's best film, uncut
Reviewed in the United Kingdom on July 31, 2010
Verified Purchase
Fat Girl (aka A Ma Soeur!) is French director Catherine Breilliat's caustic version of a teen film. It's about two young teenage sisters - Elena, who is pretty and sexy, and Anais, who is fat and ignored. On holiday, Elena is seduced by a handsome young Italian scoundrel. It's a modern classic.

The key scene in Fat Girl take place after dark in the girl's bedroom. The Italian suitor gets in, and has sex with Elena, while Anais is forced to listen in the next bed. This scene plays out in real time, and mercilessly reveals the craven behaviour of supposedly 'nice' young men who are desperate to have sex. This is the flip side of American Pie and its ilk, and is uncomfortable viewing, especially as Breilliat makes us share Anais's revulsion at it all.

The next day, the girls and their mother return home, but en route there is a very violent incident awaiting them. It may be Anais's embittered fantasy, it may not, but its inclusion is crucial to the good boy/bad boy debate the film is having. This scene is censor cut in the UK version, and there is an apology for this inside the box. By contrast, the US Criterion version is uncut, has superior picture quality, and is well worh picking up.
Read more
13 people found this helpful
Report abuse

French Film Buff
2.0 out of 5 stars Interfering cuts
Reviewed in the United Kingdom on June 15, 2014
Verified Purchase
I am not a Catherine Breillat fan, but I find myself disagreeing with Sudden Impact's view that the BBFC have done us sensitive Anglo-Saxons a favour by cutting critical moments from the film's ending. The original French version depicts Anais's experience of her rape as disturbingly ambiguous, as it ironically brings to pass what she has claimed she has always wanted: to lose her virginity to someone who doesn't love her, and to find someone or something - an animal or a werewolf, in the words of her refrain - to relieve her of her boredom, and the weight of an unloved and potentially meaningless body. With that ambiguity removed, it becomes harder to grasp Anais's passivity during the attack on the family car, and why she would categorically state to the police that she was not raped.

The preserved BBFC cuts in this version therefore make it more difficult to get at what Breillat is trying to communicate in her film, however perverse and distasteful that might be to some.
Read more
2 people found this helpful
Report abuse

Stanislav
5.0 out of 5 stars Five Stars
Reviewed in the United Kingdom on May 25, 2017
Verified Purchase
BRILLIANT
Read more
One person found this helpful
Report abuse