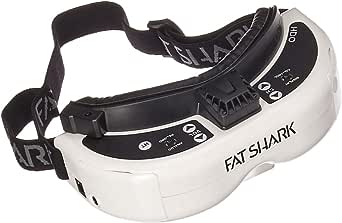 Fat Shark's HDO Goggles bring fort a new era in FPV technology. Using a patented OLED display architecture, the HDO delivers superior, high-speed images with deeper blacks and more colorful pixels. All of that is backed by the same reliability and warranty of all Fat Shark gear. The HDO’s OLED display stack produces vivid colors and higher contrast ratios, giving pilots the ability to see better detail under challenging and changing lighting conditions. Fast-moving images also display better thanks to reduced artifacts from image retention. On top of the OLED module, Fat Shark’s patented optics produce crisp images from corner to corner on each display, alleviating any blurriness around the edges of the image.

Master of all things awesome
2.0 out of 5 stars HDMI Input Doesn't Work
Reviewed in the United States on October 27, 2018
Verified Purchase
I sold my HD3s for the OLED screens and already in-place power wires for a diversity module. I assumed the base functionality was still there, so I can only provide my word that I was able to use the HD3s with simulators on my laptop (Real Drone Simulator, DRL Simulator, Liftoff, etc.).

Upon plugging in the HDOs to my laptop (the same one I used for the HD3s) I could not get the HDMI output in the goggles. I am not sure whether or not the cause was a bad design or the overall UAT process surrounding the hardware/firmware changes enabling automatic input switching when an external source is detected.

Let me explain my testing steps...

I thought it was the input signal altogether, so I tried plugging into a different HDMI source. Since the age of streaming, the only HDMI source I own is a PS4 with PS VR Goggles. I tried direct output from the PS4 and then also by plugging into the PS VR box. Neither one worked.

I started to suspect my problem might originate with the Monoprice HDMI cable. My MP cable has a Mini at one end and standard size at the other - same as the white cable that comes with the HD3s.

SIDE COMPLAINT: given the price of the HDOs, I was SHOCKED they didn't include this cable. When I ordered, I assumed the cable was never pictured with the product because someone in marketing flaked on the product photos.

I went to the local Fry's Electronics here, in Seattle. I brought my HDOs, MacBook Pro and Monoprice cable into the store with me. I proceeded to test the following combinations:
- Gaming PCs with the Monoprice cable and HDOs
- Gaming PCs with comparable HDMI cables in Fry's (BTW...the staff was GREAT about opening packages and helping troubleshoot the issue)
- Desktop computers with an RCA to HDMI conversion along the way
- My laptop with an HDMI cable sold at Fry's
- My laptop with various adapters on a standard-sized HDMI cable (...I know, it sounds stupid, but I was growing desperate and felt ridiculous this wasn't working)
- Blue Ray players with my Monoprice cable
- Blue Ray players with various combinations of HDMI cables and adapters sold at Fry's
- Blue Ray players with RCA to HDMI conversion along the way

I concluded the product MUST be defective. I requested a replacement from Amazon and it arrived the next day.

This time, prior to opening the package, I started filming so I could post my insanity on YouTube if all didn't go well. I immediately plugged the replacement into my laptop using my Monoprice cable - I didn't bother adding the ImmersionRC module or anything, not even the new battery. I wanted to ensure it was clear that I didn't make any modifications to the product.

Upon plugging the replacement into my laptop - BOOM, it worked! ....HA - no, I'm just kidding. It's a piece of crap too.

I would LOVE to see a YouTube-friendly demonstration of someone using these with an external HDMI source. My unreasonable desire is to see Fat Shark provide a demonstration of the HDMI source working with the HDOs -- complete with specifications around the video source, the cable, the weather outside and what the tester had for breakfast.

I'll post a video of my side-by-side HDO comparison soon. If I can, I'll update this review to include the video.

Nathan M. Grier
4.0 out of 5 stars Save your money
Reviewed in the United States on September 1, 2018
Verified Purchase
I feel like an idiot for spending so much money for min performance increase compared to the cheaper option.
Read more
14 people found this helpful
Helpful
Comment Report abuse

Tbommy
5.0 out of 5 stars Firmware Update fixed the problem
Reviewed in the United States on May 7, 2018
Verified Purchase
Received these and the first few flights were disappointing because colored dots filled the bright areas of the sky.

Then they came out with a firmware update and the problem went away.

So, I have the HD3's and these HDO's and the HDO's do have a better image but when you are flying the size is not notcable as you are enjoying the clear and more contrasty image.

D kelley
1.0 out of 5 stars Buyer Beware. Seriously No Joke Be Careful
Reviewed in the United States on March 21, 2019
Verified Purchase
I just received my goggles a few minutes ago and this is what was in the package.
A few days ago I was reading the reviews on the HDOs and noticed another individual that had the same problem.
There’s were filled with some small cans. I just went to post this and noticed there post has been removed.
I just spoke with amazon and they said that something is going on with these shipments.
I have heard all the horror stories about this happening to to other folks. I can’t believe this happened to me.
Hopefully this will get fixed soon.
I was so wanting to fly with these this weekend, the weather in Tx is starting to clear up.
Read more

Puddle
5.0 out of 5 stars Absolute game changer
Reviewed in the United States on March 25, 2019
Verified Purchase
If you are on the fence on this or maybe looking at something like the aomway or eachine ev200d goggles, don't. Just spend the extra and get these. They are $200 more but the second you open the box the difference is clear. I tried both of the others thinking that i could save the money. It's very apparent why the others are cheaper. The Fat Sharks are clearer, don't hurt my eyes. Focusing seems to be tailored to the eyes very well. I have absolutely no strain like I did with the others. There is no blurriness to the edges. The picture is crystal clear. Also just for information I paired this with Furious True-D V3.5 Diversity Receiver. The switch between the antenna when it needs to is seamless. Just save your money and time and get Fat Sharks. Greg French knew what he was doing when he made these. Some people say "they are gouging you on the price". I thought this way too. It's not true these things are a game changer. I hope I was a help to someone out there thinking the way I was.
Read more

Amazon customer
5.0 out of 5 stars Look good. Still debating if they are worth it
Reviewed in the United States on December 17, 2018
Verified Purchase
I have the HD3 now and these are a little clearer but the screen is slightly smaller. Its a toss up if its worth the upgrade.
Read more
7 people found this helpful
Helpful
Comment Report abuse

Roy R.
5.0 out of 5 stars Only you can decide
Reviewed in the United States on April 16, 2019
Verified Purchase
*UPDATE*
To my dismay, I had to return them after wearing them for a very short period of time. Both lenses had distortion from top to bottom about 3/4 of the way out. Very noticeable when adjusting the goggles on my face from side to side. I didn't notice this when I wrote this review as I only had them on a few minutes. But after my eyes adjusted, yeah, im really disappointed because they are so sharp and clear. Perhaps I should have sent them to Fatshark, idk but this is more then I would normally spend on something like this.
*Original review*
You don't buy these HDO's for the features, or dvr. You buy these for the epic oled screens. I can only compare them to the FS Attitude v2's and FXT V2. Attitude's are laughable in comparison to either of these. FXT's have a beautiful huge screen but are massive in comparison to FS goggles. HDO's are compact, with bright crystal clear screens. AKK diversified rec was suppose to be here same delivery as HDO's, but something happened on shipping end so had to test them with an Immersion LR ground station. Having never owned an external rec goggle the new oled tech for rx's is pretty amazing looking and is filled with high tech functions. I already purchased the fatshark 18650 battery pack for other goggles, but the included new style FS sealed lipo battery comes charged, allows usb charging, and has a push button battery meter.
I don't know your situation so cant tell you what to buy and how much to spend. But for me, the HDO's are an amazing step up in my fpv journey.
Read more
Helpful
Comment Report abuse
See all reviews

deep
1.0 out of 5 stars Received junk in mail
Reviewed in Canada on May 19, 2019
Verified Purchase
No Electronics inside!
Instead found tackie glue inside maybe to make up for weight lost with the displays!!
Read more

Nina Gower
5.0 out of 5 stars Exactly what I wanted
Reviewed in Canada on May 11, 2019
Verified Purchase
Makes flying a drone super fun
Read more
Report abuse