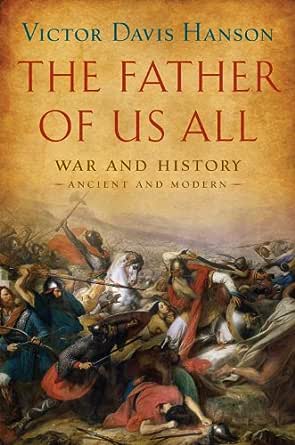 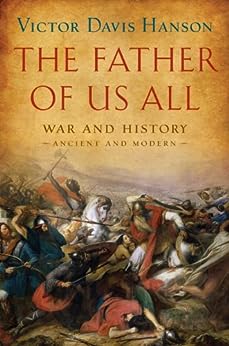 The Father of Us All: War and History, Ancient and Modern Kindle Edition

Since 9/11, Davis, director of the Hoover Institution's group on military history and contemporary conflict, has emerged as a major commentator on war making and politics. This anthology brings together 13 of Hanson's essays and reviews, revised and re-edited. They have appeared over the past decade in periodicals from the American Spectator to the New York Times. Hanson's introductory generalization that war is a human enterprise that seems inseparable from the human condition structures such subjects as an eloquent answer to the question Why Study War? a defense of the historicity of the film 300, about the Persian Wars, in a masterpiece of envelope pushing, and a comprehensive and dazzling analysis of why America fights as she does. He explains why, though a lesser historian than Thucydides, Xenophon retains a timeless attraction and analyzes war and democracy in light of America's decreasing willingness to intervene in places like Rwanda or Darfur. The pieces are well written, sometimes elegantly so, and closely reasoned. They address familiar material from original and stimulating perspectives. Hanson's arguments may not convince everyone, but cannot be dismissed. His critics and admirers will be pleased to have these pieces available under one cover. (May)
Copyright © Reed Business Information, a division of Reed Elsevier Inc. All rights reserved. --This text refers to an out of print or unavailable edition of this title.

Folksinger Pete Seeger ain’t gonna study war no more, but classicist Hanson warns against skipping class in this set of essays reworked from his recent articles, book reviews, and book introductions. In Hanson’s estimation, amnesia about military history permeates America’s media, political, and intellectual leadership: out of fashion in the academy, military history was the specialty of just 1.9 percent of American history professors as of 2007. As he suggests reasons for this state of neglect, Hanson expatiates within specific essays, such as his preface to Donald Kagan’s The Peloponnesian War (2003), on the effects of historical forgetfulness. Hanson sees examples abounding in American leaders’ negative reactions to the Iraq War, responses that the author witheringly critiques for poor historical aptitude and poor understanding about the military and military operations. At bottom, Hanson argues that recoiling from learning about warfare ignores what he insists is its tragic nature: that war, inherent in human nature, can only be struggled against and not be wished away. Not a happy message to peace-studies idealists but one a balanced current-events collection should include. --Gilbert Taylor --This text refers to an out of print or unavailable edition of this title.

“[A] lively collection … the writing is always elegant and erudite.”—Foreign Affairs

“Hanson has provided a thoughtful, wide-ranging look at the fundamental questions of war and peace.” – MHQ, The Quarterly Journal of Military History.

“A masterpiece of envelope pushing, and a comprehensive and dazzling analysis of why America fights as she does. Hanson’s arguments may not convince everyone, but cannot be dismissed.”—Publishers Weekly

“Not a happy message to peace-studies idealists but one a balanced current-events collection should include.”—Booklist

“I have never read another book which explains so well the truth that ‘war lies in the dark hearts of us all’ but that history offers hope.”—William Shawcross, author of Allies and Deliver Us from Evil

“Few writers cover both current events and history--and none with the brilliance and erudition of Victor Davis Hanson. In The Father of Us All, he uses his deep knowledge of military history to shed light on present-day controversies. Required reading for anyone interested in war, past or present.”—Max Boot, Jeane J. Kirkpatrick Senior Fellow for National Security Studies at the Council on Foreign Relations and author of The Savage Wars of Peace and War Made New

“Victor Hanson brings to his writing a mixture of learning and reflection that is rare in any age, especially the ignorant one in which we live”—Dr. Larry Arnn, President of Hillsdale College

Victor Davis Hanson is the Martin and Illie Anderson Senior Fellow in Residence in Classics and Military History at the Hoover Institution, Stanford University, a professor of Classics Emeritus at California State University, Fresno, and a nationally syndicated columnist for Tribune Media Services.
--This text refers to an out of print or unavailable edition of this title.
Read more