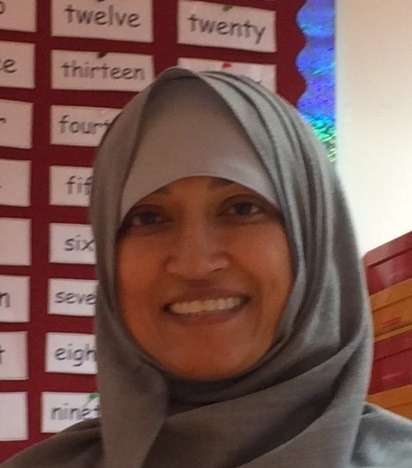 "Yaffa and Fatima are neighbors in the Land of Milk and Honey, where each tends her own date grove.
Every day they pick and sell their dates, cook and share tasty foods, and pray to God―Yaffa in the
synagogue and Fatima in the mosque. When hard times come, they worry about the other’s welfare, and
when they realize that each has been secretly sharing with the other, they are grateful for their friendship.
Inspired by traditional Jewish and Arab tales that usually feature brothers, as in Neil Waldman’s The Two
Brothers: A Legend of Jerusalem (1997), this female-oriented story is told in folkloric style, adding a
multicultural emphasis not present in the originals. Yaffa and Fatima both observe their own cultural and
linguistic traditions, but that never prevents them from appreciating their differences and caring about the
other. Fedele’s artwork features earth tones (appropriate to the arid climate) accented in teal (for Yaffa)
and red (for Fatima). A timeless story, this tale makes its point without ever becoming didactic."
―Booklist Online

"In this retelling of a tale rooted in both Jewish and Arab traditions, two neighbors are friends despite perceived religious tensions of the community. Yaffa and Fatima both own date groves right next door to each other. They share meals and talk and laugh. When Fatima sees Yaffa on the street, she waves and calls, 'Salaam! Peace!' Yaffa waves back and calls, 'Shalom! Peace!' The text becomes a list of differences between the two women. Yaffa prays in a synagogue. Fatima prays in a mosque. Fatima celebrates Eid. Yaffa celebrates Passover. Fatima is clad in a burgundy hijab, while Jaffa has a deep teal headscarf. Those two colors, set against a neutral backdrop, lightly accent the women's everyday surroundings as well. The tones are carefully placed to distinguish the two women but are also included in ancillary details to begin to build a feeling of unity. Gilani-Williams never distinctly references any conflict―in fact, even the Israeli setting is not specifically mentioned, only to call it the 'Land of Milk and Honey.' But readers can tell, because differences very much define the women's relationship, that they are overcoming some sort of obstacle in being friends. A subtle, visually arresting introduction to ethnic relations."―Kirkus Reviews

"Based on an old folktale with both Jewish and Arabic roots, this version of the story focuses on Yaffa and Fatima, two neighbors who are Jewish and Muslim, respectively. The first half of the book sets up their friendship and lays out the different customs of each woman. Then hard times come. Separately, the friends each come up with an identical plan to help the other one out. The text is simple but lovely, as are the muted but expressive illustrations―both of which suit the story perfectly. Its message of mutual respect and of the power of friendship to transcend differences is especially welcome right now."--Jewish Book Council

Fawzia Gilani was born and raised in England where she became a teacher. She is the author of many children's books, including A Treasury of Eid Tales, and is currently working on an Islamic fairy tale series. She serves as an international educational consultant with a PhD in children's literature and character development. She is a Global Representative for the International Positive Education Network and works for the Abu Dhabi Education Council. She spends her time in the United Arab Emirates, Ohio, and England with her daughter and husband. She looks forward to the day when world conflict is no more.

Chiara Fedele was born in Milan, Italy. After graduating from art school, she attended the Brera Academy in Milan. Her illustrations have appeared in many picture books. Chiara also teaches drawing and painting techniques. She lives in Pavia, Italy.

Start reading Yaffa and Fatima: Shalom, Salaam on your Kindle in under a minute.

4.9 out of 5 stars
4.9 out of 5
24 global ratings
How are ratings calculated?
To calculate the overall star rating and percentage breakdown by star, we don’t use a simple average. Instead, our system considers things like how recent a review is and if the reviewer bought the item on Amazon. It also analyzes reviews to verify trustworthiness.
Top reviews

Anna
5.0 out of 5 stars The World Needs Stories Like This
Reviewed in the United States on June 5, 2017
Verified Purchase
I heard somewhere that the real version of this story was between two men, but I think it's so nice that the author chose to write it with two females. It's a short read, but I did enjoy it. Glad to have it on the shelf.
Read more
One person found this helpful
Helpful
Comment Report abuse

EmilyT
5.0 out of 5 stars I bought 2 and shared :)
Reviewed in the United States on June 9, 2017
Verified Purchase
Love this book! Simple, sweet and shows my daughter another Religion's customs.
Read more
One person found this helpful
Helpful
Comment Report abuse

Suzanne
5.0 out of 5 stars Positive Interfaith Message
Reviewed in the United States on July 20, 2017
Verified Purchase
Excellent take on an old tale allowing children to see the love between women of different faiths. So important in these times.
Read more
2 people found this helpful
Helpful
Comment Report abuse

Kristi Bernard
5.0 out of 5 stars Kristi's Book Nook
Reviewed in the United States on March 5, 2017
In the land of milk and honey is where Yaffa and Fatima lived. These women are the same but different. They both own a date grove. They pick the dates and sell them at market. Sometimes they shared a meal. Yaffa loved Fatima’s shwarma and Fatima loved Yaffa’s schnitzel. Both prayed and loved their God. Fatima prayed in a mosque and Yaffa prayed in a synagogue. But, there was a time when a drought came and dates were not so plentiful. The two women laid awake at night worrying whether or not the other had enough to eat. How do you think each woman could help the other?

This story was inspired by a tale that is said to have both Jewish and Arab origins. Young readers will learn that although we have different cultures and religions we are still all human beings and we can share and embrace each other’s differences. Easy to read sentences along with colorful illustrations depict these cultures differences and similarities. Parents and teachers can use this as a tool to explain acceptance.
Read more
4 people found this helpful
Helpful
Comment Report abuse

Kathy Ellen
5.0 out of 5 stars Pick up this book; it's a great read and just what our world needs now!
Reviewed in the United States on October 31, 2017
This is a great picture book to talk about differences and similarities. These two women live next door to each other and both own date trees, then sell the dates at the market. One is Jewish, one is Muslim, and both are best friends. So what will they do when their crops run low one year? I loved this story and snagged it immediately when I saw it on display. A great incidental diversity book that really shows how we are all more alike than unalike. The illustrations are beautiful and I love how the artist gave each character a sort of signature color; their clothes and things in their houses are either blue or red.
Read more
One person found this helpful
Helpful
Comment Report abuse

IlanaWD
4.0 out of 5 stars Moving forward, together
Reviewed in the United States on March 29, 2017
'Yaffa loved Fatima's shwarma. And Fatima loved Yaffa's schnitzel'. Ideally, friendship and good neighborhood can go beyond differences, as long as the two parts recognize and respect other person's individuality. Based on a story apparently common in both the Jewish and Arabic folktale, but with two brothers, this beautifully illustrated story taking place in 'the land of milk and honey' can be an useful inspiration to be shared in the classroom, teaching children from an early age about respect and tolerance. The two women respect each other, are both religious and care about the other's. In an ideal world, where religion is not used to justify crimes and political actions, a meal of dates and tea shared by the two would be possible. Although one might not necessarily share the message of the book, it creates at least a proper space for discussion and conversation which is very important for moving forward.
Disclaimer: Book offered by the publisher
Read more
Helpful
Comment Report abuse
See all reviews